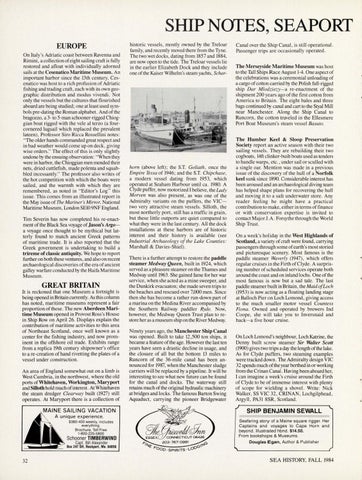 SHIP NOTES, SEAPORT EUROPE On Italy&#39;s Adriatic coast between Ravenna and Rimi ni , a collection of eight sailing craft is fu lly restored and afl oat with individually adorned sails at the Cesenatico Maritime M useum. An important harbor since the 13th century, Cesenatico was host to a rich profusion of Adriatic fishing and tradi ng craft, each with its own geographi c distribution and modu s vivendi . Not only the vessels but the cultures that flourished aboard are being studied ; one at least used symbols pre-dating the Roman alphabet. And of the bragozzo, a 3- to 5-man schooner-rigged Chioggian boat rigged with the vele al terzo (a fourcornered lugsail which replaced the prevalent lateen) , Professor Siro Ricca Rossell ini notes : &quot;The older hands commanded great respect and in bad weather would come up on deck, givi ng wise orders.&quot; The effect of th is is onl y slightly undone by the ensuing observation: &quot;When they were in harbor, the Chioggian men mended their nets, dried cuttlefish, made polenta and squabbled incessantly.&quot; The professor also writes of the hot competition with which the boats were sailed , and the warmth with which they are remembered , as noted in &quot; Editor&#39;s Log&quot; th is issue. Thi s comes fro m an illustrated report in the May issue of 1he Mariner&#39;s Mirror, National Maritime Museum, London SEIO9NF England. Tim Severin has now completed his re-enactment of the Black Sea voyage of Jason&#39;s AfXoa voyage once thought to be mythical but latterly fou nd to match ancient Greek patterns of mar itime trade. It is also reported that the Greek government is undertaki ng to bu ild a trireme of classic antiquity. We hope to report further on both these ventures, and also on recent archaeological discoveries of the era of ancient galley wa rfare conducted by the Haifa Mariti me Mu seum .

GREAT BRITAIN It is reckoned that one Museum a fo rtnight is being opened in Britain currently. As this column has noted , maritime mu seums represent a fa ir proportion of these. The new Aberdeen Maritime Museum opened in Provost Ross&#39;s House in Ship Row on April 26. Displays explain the contribution of maritime activities to this area of Northeast Scotland , once well known as a center fo r the fi shing industry, and now prominent in the offshore oil trade. Exhibits range from a replica 19th century shipowner&#39;s office to a re-creation of hand rivetting the plates of a vessel under construction. An area of England somewhat out on a limb is West Cumbria, in the northwest , where the old ports of Whitehaven, Workington, Maryport and Silloth hold much of interest. At Whitehaven the steam dredger Clearway built (1927) still operates. At Maryport there is a collection of

hi storic vessels, mostly owned by the Treloar family, and recently moved there from the Tyne. The two wet docks, dating fro m 1857 and 1884, are now open to the tide. The Treloar vessels lie in the earlier Elizabeth Dock and they incl ude one of the Kaiser Wilhelm&#39;s steam yachts , Schar-

horn (above left) ; the S.T. Goliath , once the Empire Tessa of 1946 ; and the S.T. Chipchase , a modern vessel dating from 1953, which operated at Seaham Harbour until ca. 1980. A Clyde puffer, now motorized I believe, the Lady Morven was also present ,Âˇ as was one of the Admiralty variants on the puffers, the VICtwo very attractive steam vessels. Silloth , the most northerly port , still has a traffi c in grai n, but these little outports are quiet compared to what they were in the last centu ry. All the dock installations at these harbors are of hi sto ric interest and their history is available (see Industrial Archaeology of the Lake Counties : Marshall &amp; Davies-Shiel).

Canal over the Ship Canal, is sti ll operatio nal. Passenger trips are occasionally operated. The M erseyside Maritime Museum was host to the Tall Ships Race August 1-4. One aspect of the celebrations was a ceremonial unloading of a cargo of cotton carried by the Polish full -rigged ship Dar Mlodzi ezy-a re-enactment of the shipment 200 years ago of the fi rst cotton fro m America to Brita in . The eight bales and three bags continued by canal and cart to the Styal Mill near Mancheste r. Along the Ship Canal to Runcorn , the cotto n traveled in the Ellesmere Port Boat Museum&#39;s steam vessel Basuto. The Humber Keel &amp; Sloop Preservation Society report an acti ve seaso n with their two sail ing vessels. They are rebuilding their two cogboats, 14ft clinker-built boats used as tenders to handle warps, etc. , under sail o r sculled with a si ngle oar. Mention was made in a previous issue of the discovery of the hull of a Norfolk keel sunk since 1890. Considerable interest has been aroused and an archaeological diving team has helped shape pl ans fo r recovering the hull and mov ing it to a safe underwater store. Any reader fee ling he might have a practi cal co ntribution to make, either in terms of fin ance or with conservation experti se is invi ted to contact Major J.A . Forsythe th rough the World Ship Tru st.

There is a further attempt to restore the paddle steamer M edway Queen, bu ilt in 1924, which served as a pl easu re steamer on the Thames and Medway until 1963. She gained fame for her war service, when she acted as a mine sweeper, and the Dunkirk evacuaton; she made seven trips to the beaches and rescued over 7,000 men. Since then she has become a rather run-dow n part of a marina on the Medina River accompanied by the Southern Ra il way paddler Ryde. Now, however, the Medway Queen Trust plan to restore her as a museum ship on the River Medway.

On a week&#39;s holiday in the West Highlands of Scotland, a variety of craft were found , carrying passengers th rough some of earth&#39;s most storied and picturesque scenery. Most famous is the paddl e steamer l#lverly (1947) , whi ch offers regul ar cruises in the Firth of Clyde. A surpri sing number of scheduled services operate both around the coast and on inland lochs. One of the most famous is now but a sad tale. The last paddle steamer built in Britain, the Maid ofLach (1953) is now acting as a floating landing stage at Ball och Pier on Loch Lomond , giving access to the much smaller motor vessel Countess Fiona. Owned and operated by brewers Ind Coope, she will take you to Inversnaid and back-a fi ve ho ur crui se.

Ninety years ago, the Manchester Ship Canal was opened . Built to take 12 ,500 ton ships, it became a feature of the age. However the last ten years have seen a drastic decl ine in usage, and the closure of all but the bottom 13 miles to Runcorn of the 36-mile canal has been announced for 1987, when the Manchester sludge carriers will be replaced by a pipeline. It will be interesting to see what new future can be fo und fo r the canal and docks. The waterway still retains much of the original hydraulic machinery at bridges and locks. The fa mous Barton Swing Aquaduct, carry ing the pioneer Bridgewater

On Loch Lomond&#39;s neighbour, Loch Katrine, the Denny built screw steamer Sir Walter Scott (1900) gives two trips a day the length of the lake. As fo r Clyde puffers, two steaming examples were tracked down. The Admiralty des ign VIC 32 spends much of the year berthed in or working fro m the C rinan Canal . Hav ing been aboard her, I can imagi ne a week&#39;s c ruise around the Firth of Clyde to be of immense interest with plenty of scope fo r wielding a shovel. Write: Ni ck Walker, SS VIC 32, CRINAN , Lochgilphead , Argy ll , PA3 1 8SR , Scotland.