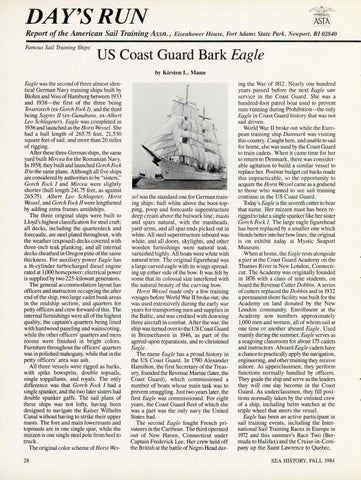 Eagle was the second of three almost identical German Navy training ships built by Blohm and Voss of Hamburg between 1933 and 1938-the first of the three being Tovaristsch (ex-Gorch Fock I) , and the third being Sagres II (ex-Gunabara, ex-Albert Leo Schlageter). Eagle was completed in 1936 and launched as the Horst ~ssel. She had a hull length of 265.75 feet , 21 ,530 square feet of sail, and more than 20 miles of rigging. After these three German ships, the same yard built Mircea for the Romanian Navy. In 1958, they built and launched Gorch Fock II to the same plans. Although all five ships are considered by authorities to be &quot;sisters,&quot; Gorch Fock I and Mircea were slightly shorter (hull length 241.75 feet, as against 265.75). Alben Leo Schlageter, Horst ~ssel, and Gorch Fock II were lengthened by adding extra frames amidships. The three original ships were built to Lloyd&#39;s highest classification for steel craft; all decks, including the quarterdeck and forecastle, are steel plated throughout, with the weather (exposed) decks covered with three-inch teak planking, and all internal decks sheathed in Oregon pine of the same thickness . For auxiliary power Eagle has a 16-cylinder turbocharged diesel engine rated at 1,000 horsepower; electrical power is supplied by two 225-kilowatt generators. The general accommodation layout has officers and instructors occupying the after end of the ship, two large cadet bunk areas in the midship section, and quarters for petty officers and crew forward of this. The internal furnishings were all of the highest quality, the captain&#39;s quarters being lined with hardwood paneling and wainscoting, while the other officers&#39; quarters and mess rooms were finished in bright colors . Furniture throughout the officers&#39; quarters was in polished mahogany, while that in the petty officers&#39; area was ash. All three vessels were rigged as barks, with spike bowsprits, double topsails, single topgallants, and royals. The only difference was that Gorch Fock I had a single spanker, and the two later sisters had double spanker gaffs. The sail plans of these ships was not lofty, having been designed to navigate the Kaiser Wilhelm Canal without having to strike their upper masts. The fore and main lowermasts and topmasts are in one single spar, while the mizzen is one single steel pole from heel to truck . The original color scheme of Horst ~s28

sel was the standard one for German training ships : hull white above the boot-topping, poop and forecastle superstructure deep cream above the bulwark line; masts and spars natural , with . the mastheads, yard-arms, and all spar ends picked out in white. All steel superstructure inboard was white, and all doors, skylights, and other wooden furnishings were natural teak, varnished highly. All boats were white with natural trim. The original figurehead was a large carved eagle with its wings spreading up either side of the bow. It was felt by some that its colossal size interfered with the natural beauty of the curving bow. Horst ~ssel made only a few training voyages before World War II broke out; she was used extensively during the early war years for transporting men and supplies in the Baltic, and was credited with downing three aircraft in combat. After the war, the ship was turned over to the US Coast Guard in Bremerhaven in 1946, as part of the agreed-upon reparations, and re-christened Eagle. The name Eagle has a proud history in the US Coast Guard. In 1790 Alexander Hamilton , the first Secretary of the Treasury, founded the Revenue Marine (later, the Coast Guard) , which commissioned a number of boats whose main task was to prevent smuggling. Just two years later, the first Eagle was commissioned. For eight years, the Coast Guard fleet of which she was a part was the only navy the United States had . The second Eagle fought French privateers in the Cari bean. The third operated out of New Haven, Connecticut under Captain Frederick Lee. Her crew held off the British at the battle of Negro Head dur-

ing the War of 1812. Nearly one hundred years passed before the next Eagle saw service in the Coast Guard. She was a hundred-foot patrol boat used to prevent rum-running during Prohibition- the only Eagle in Coast Guard history that was not sail driven. World War II broke out while the European training ship Danmark was visiting this country. Caught here, and unable to sail for home, she was used by the Coast Guard to train cadets. When it came time for her to return to Denmark , there was considerable agitation to build a similar vessel to replace her. Postwar budget cut backs made this impracticable, so the opportunity to acquire the Horst ~ssel came as a godsend to those who wanted to see sail training continue in the US Coast Guard . Today&#39;s Eagle is the seventh cutter to bear that name. Her mizzen mast has been rerigged to take a single spanker like her sister Gorch Fock I. The large eagle figurehead has been replaced by a smaller one which blends better into her bow lines; the original is on exhibit today at Mystic Seaport Museum. When at home, the Eagle rests alongside a pier at the Coast Guard Academy on the Thames River in New London, Connecticut. The Academy was originally founded in 1876 with a class of nine students, on board the Revenue Cutter Dobbin. A series of cutters replaced the Dobbin and in 1932 a permanent shore facility was built for the Academy on land donated by the New London community. Enrollment at the Academy now numbers approximately 1,000 men and women , all of whom sail at one time or another aboard Eagle. Used mainly during the summer, Eagle serves as a seagoing classroom for about 175 cadets and instructors. Aboard Eagle cadets have a chance to practically apply the navigation, engineering, and other training they receive ashore. As upperclassmen , they perform functions normally handled by officers. They guide the ship and serve as the leaders they will one day become in the Coast Guard . As underclassmen , they fill positions normally taken by the enlisted crew of a ship, including helm watches at the triple wheel that steers the vessel. Eagle has been an active participant in sail training events, including the International Sail Training Races in Europe in 1972 and this summer&#39;s Race Two (Bermuda to Halifax) and the Cruise-in-Company up the Saint Lawrence to Quebec. SEA HISTORY, FALL 1984