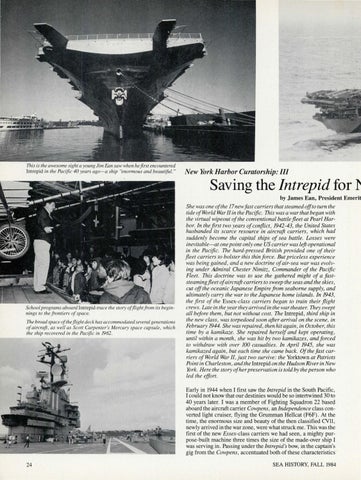 This is the awesome sight a young Jim E:an saw when he first encountered Intrepid in the Pacific 40 years ago-a ship &quot;enormous and beautiful.&quot;

Saving the Intrepid for ~

School programs aboard Intrepid trace the story offlight from its beginnings to the frontiers of space. The broad space ofthe flight deck has accommodated several generations of aircraft, as well as Scott Carpenter&#39;s Mercury space capsule, which the ship recovered in the Pacific in 1962.

by James Eau, President Emerit She was one ofthe 17 new fast carriers that steamed offto turn the tide of World War II in the Pacific. This was a war that began with the virtual wipeout of the conventional battle fleet at Pearl Harbor. In the first two years of conflict, 1942-43, the United States husbanded its scarce resource in aircraft carriers, which had suddenly become the capital ships of sea battle. Losses were inevitable-at one point only one US carrier was left operational in the Pacific. The hard-pressed British provided one of their fleet carriers to bolster this thin force. But priceless experience was being gained, and a new doctrine of air-sea war was evolving under Admiral Chester Nimitz, Commander of the Pacific Fleet. This doctrine was to use the gathered might of a faststeamingfleet ofaircraft carriers to sweep the seas and the skies, cut off the oceanic Japanese Empire from seaborne supply, and ultimately carry the war to the Japanese home islands. In 1943, the first of the Essex-class carriers began to train their flight crews. Late in the year they arrived in the war theater. They swept all before them, but not without cost. The Intrepid, third ship in the new class, was torpedoed soon after arrival on the scene, in February 1944. She was repaired, then hit again, in October, this time by a kamikaze. She repaired herself and kept operating, until within a month, she was hit by two kamikazes, and forced to withdraw with over 100 casualties. In April 1945, she was kamikazed again, but each time she came back. Of the fast carriers of World War II, just two survive: the Yorktown at Patriots Point in Charleston, and the Intrepid on the Hudson River in New York. Here the story ofher preservation is told by the person who led the effort. Early in 1944 when I first saw the Intrepid in the South Pacific, I could not know that our destinies would be so intertwined 30 to 40 years later. I was a member of Fighting Squadron 22 based aboard the aircraft carrier Cowpens , an Independence class converted light cruiser, flying the Grumman Hellcat (F6F). At the time, the enormous size and beauty of the then classified CVll, newly arrived in the war zone, were what struck me. This was the first of the new Essex-class carriers we had seen, a mighty purpose-built machine three times the size of the made-over ship I was serving in. Passing under the lntrepid&#39;s bow, in the captain&#39;s gig from the Cowpens, accentuated both of these characteristics