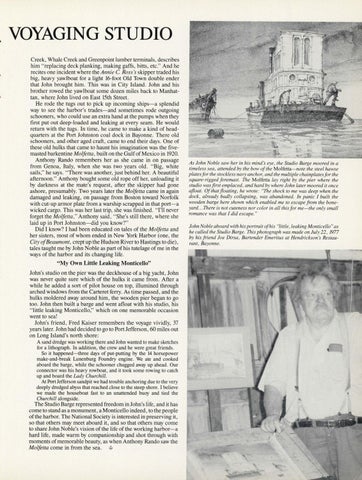 VOYAGING STUDIO Creek, Whale Creek and Greenpoint lumber terminals, describes him &quot;replacing deck planking, making gaffs, bitts, etc.&quot; And he recites one incident where the Annie C Ross &#39;s skipper traded his big, heavy yawlboat for a light 16-foot Old Town double ender that John brought him . This was in City Island . John and his brother rowed the yawlboat some dozen miles back to Manhattan, where John lived on East 15th Street. He rode the tugs out to pick up incoming ships-a splendid way to see the harbor&#39;s trades-and sometimes rode outgoing schooners, who could use an extra hand at the pumps when they first put out deep-loaded and leaking at every seam. He would return with the tugs. In time, he came to make a kind of headquarters at the Port Johnston coal dock in Bayonne. There old schooners, and other aged craft, came to end their days. One of these old hulks that came to haunt his imagination was the fivemasted barkentine Molfetta, built on the Gulf of Mexico in 1920. Anthony Rando remembers her as she came in on passage from Genoa, Italy, when she was two years old. &quot;Big, white sails,&#39;&#39; he says. &quot; There was another, just behind her. A beautiful afternoon .&quot; Anthony bought some old rope off her, unloading it by darkness at the mate&#39;s request, after the skipper had gone ashore, presumably. Two years later the Molfetta came in again damaged and leaking, on passage from Boston toward Norfolk with cut-up armor plate from a warship scrapped in that port-a wicked cargo. This was her last trip, she was finished. &quot;I&#39;ll never forget the Molfetta ,&quot; Anthony said, &quot;She&#39;s still there, where she laid up in Port Johnston-did you know?&quot; Did I know? I had been educated on tales of the Molfetta and her sisters, most of whom ended in New York Harbor (one, the City ofBeaumont, crept up the Hudson River to Hastings to die) , tales taught me by John Nable as part of his tutelage of me in the ways of the harbor and its changing life. &quot;My Own Little Leaking Monticello&quot; John&#39;s studio on the pier was the deckhouse of a big yacht, John was never quite sure which of the hulks it came from. After a while he added a sort of pilot house on top, illumined through arched windows from the Carteret ferry. As time passed , and the hulks moldered away around him, the wooden pier began to go too. John then built a barge and went afloat with his studio, his &quot; little leaking Monticello,&quot; which on one memorable occasion went to sea! John&#39;s friend , Fred Kaiser remembers the voyage vividly, &#39;37 years later. John had decided to go to Port Jefferson , 60 miles out on Long Island&#39;s north shore: A sand dredge was working there and John wanted to make sketches for a lithograph. In addition, the crew and he were great friends. So it happened-three days of put-putting by the 14 horsepower make-and-break Lunenburg Foundry engine. We ate and cooked aboard the barge, while the schooner chugged away up ahead. Our connector was his heavy rowboat, and it took some rowing to catch up and board the Lady Churchill. At Port Jefferson sandpit we had trouble anchoring due to the very deeply dredged abyss that reached close to the steep shore. I believe we made the houseboat fast to an unattended buoy and tied the Churchill alongside. . .

The Studio Barge represented freedom in John&#39;s life, and it has come to stand as a monument, a Monticello indeed, to the people of the harbor. The National Society is interested in preserving it, so that others may meet aboard it, and so that others may come to share John Noble&#39;s vision of the life of the working harbor-a hard life, made warm by companionship and shot through with moments of memorable beauty, as when Anthony Rando saw the Molfetta come in from the sea. .t

As John Noble saw her in his mind&#39;s eye, the Studio Barge moored in a timeless sea, attended by the bow of the Molfetta-note the steel hawse plates for the stockless navy anchor, and the multiple chainplates for the square-rigged foremast. The Molfetta lay right by the pier where the studio was first emplaced, and hard by where John later moored it once afloat. Of that floating, he wrote: &quot;The shock to me was deep when the dock, already badly collapsing, was abandoned. In panic I built the wooden barge here shown which enabled me to escape from the boneyard... There is not cuteness nor color in all this for me-the only small romance was that I did escape.&quot; John Noble aboard with his portrait ofhis &quot;little, leaking Monticello&quot; as he called the Studio Barge. This photograph was made on July 22, 1977 by his friend Joe Dirsa, Bartender Emeritus at Hendrickson&#39;s Restaurant, Bayonne.