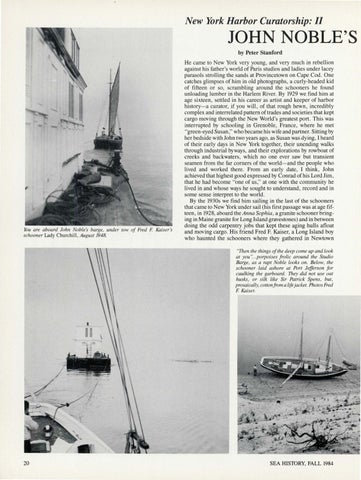 He came to New York very young, and very much in rebellion against his father&#39;s world of Paris studios and ladies under lacey parasols strolling the sands at Provincetown on Cape Cod . One catches glimpses of him in old photographs, a curly-headed kid of fifteen or so, scrambling around the schooners he found unloading lumber in the Harlem River. By 1929 we find him at age sixteen , settled in his career as artist and keeper of harbor history-a curator, if you will, of that rough hewn , incredibly complex and interrelated pattern of trades and societies that kept cargo moving through the New World&#39;s greatest port . This was interrupted by schooling in Grenoble, France, where he met &quot;green-eyed Susan,&quot; who became his wife and partner. Sitting by her bedside with John two years ago, as Susan was dying, I heard of their early days in New York together, their unending walks through industrial byways , and their explorations by rowboat of creeks and backwaters, which no one ever saw but transient seamen from the far corners of the world-and the people who lived and worked there. From an early date, I think , John achieved that highest good expressed by Conrad of his Lord Jim, that he had become &quot;one of us,&quot; at one with the community he lived in and whose ways he sought to understand , record and in some sense interpret to the world. By the 1930s we find him sailing in the last of the schooners that came to New York under sail (his first passage was at age fifteen, in 1928, aboard the Anna Sophia, a granite schooner bringing in Maine granite for Long Island gravestones) and in between doing the odd carpentry jobs that kept these aging hulls afloat and moving cargo. His friend Fred F. Kaiser, a Long Island boy who haunted the schooners where they gathered in Newtown &quot;Then the things of the deep come up and look at you &#39;&#39;. .. porpoises frolic around the Studio Barge, as a rapt Noble looks on. Below, the schooner laid ashore at Port Jefferson for caulking the garboard. They did not use oat husks, or silk like Sir Patrick Spens, but, prosaically, cotton from a life jacket. Photos Fred F. Kaiser.