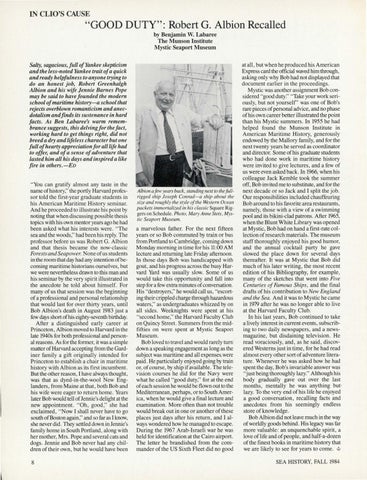 &quot;GOOD DUTY&quot;: Robert G. Albion Recalled by Benjamin W. Labaree The Munson Institute Mystic Seaport Museum Salty, sagacious, full of Yankee skepticism and the less-noted Yankee trait of a quick and ready helpfulness to anyone trying to do an honest job, Robert Greenhalgh Albion and his wife Jennie Barnes Pope may be said to have founded the modern school of maritime history-a school that rejects overblown romanticism and anecdotalism and finds its sustenance in hard facts. As Ben Labaree&#39;s warm remembrance suggests, this delving for the fact, working hard to get things right, did not breed a dry and lifeless character but one full of hearty appreciation for all life had to offer, and of a sense of adventure that lasted him all his days and inspired a like fire in others.-ED &quot;You can gratify almost any taste in the name of history,&quot; the portly Harvard professor told the first-year graduate students in his American Maritime History seminar. And he proceeded to illustrate his point by noting that when discussing possible thesis topics with his own mentor years ago he had been asked what his interests were. &quot; The sea and the woods,&quot; had been his reply. The professor before us was Robert G. Albion and that thesis became the now-classic Forests and Seapower. None ofus students in the room that day had any intention of becoming maritime historians ourselves, but we were nevertheless drawn to this man and his seminar by the very spirit illustrated in the anecdote he told about himself. For many of us that session was the beginning of a professional and personal relationship that would last for over thirty years, until Bob Albion&#39;s death in August 1983 just a few days short of his eighty-seventh birthday. After a distinguished early career at Princeton, Albion moved to Harvard in the late 1940s for both professional and personal reasons. As for the former, it was a simple matter of Harvard accepting from the Gardiner family a gift originally intended for Princeton to establish a chair in maritime history with Albion as its first incumbent. But the other reason, I have always thought, was that as dyed-in-the-wool New Englanders, from Maine at that, both Bob and his wife were eager to return home. Years later Bob would tell of Jennie&#39;s delight at the new appointment. &quot;Oh, good ,&quot; she had exclaimed , &quot;Now I shall never have to go south of Boston again,&quot; and so far as I know, she never did . They settled down in Jennie&#39;s family home in South Portland , along with her mother, Mrs . Pope and several cats and dogs. Jennie and Bob never had any children of their own , but he would have been 8

Albion a few years back, standing next to thefullrigged ship Joseph Conrad-a ship about the size and roughly the style of the !#stern Ocean packets immortalized in his classic Square Riggers on Schedule. Photo, Mary Anne Stets, Mystic Seaport Museum .

a marvelous father. For the next fifteen years or so Bob commuted by train or bus from Portland to Cambridge, coming down Monday morning in time for his ll:OO AM lecture and returning late Friday afternoon . In those days Bob was handicapped with gout, and his progress across the busy Harvard Yard was usually slow. Some of us would take this opportunity and fall into step for a few extra minutes of conversation . His &quot;destroyers,&#39;&#39; he would call us, &quot;escorting their crippled charge through hazardous waters,&quot; as undergraduates whizzed by on all sides. Weeknights were spent at his &quot;second home,&quot; the Harvard Faculty Club on Quincy Street. Summers from the midfifties on were spent at Mystic Seapon Museum . Bob loved to travel and would rarely turn down a speaking engagement as long as the subject was maritime and all expenses. were paid. He particularly enjoyed going by train or, of course, by ship if available. The television courses he did for the Navy were what he called &quot;good duty,&#39; &#39; for at the end of each session he would be flown out to the Mediterranean, perhaps, or to South America, when he would give a final lecture and examination . More often than not trouble would break out in one or another of these places just days after his return , and I always wondered how he managed to escape. During the 1967 Arab-Israeli war he was held for identification at the Cairo airport. The letter he brandished from the commander of the US Sixth Fleet did no good

at all , but when he produced his American Express card the official waved him through, asking only why Bob had not displayed that document earlier in the proceedings. Mystic was another assignment Bob considered &quot;good duty.&quot; &quot;Take your work seriously, but not yourself&#39; was one of Bob&#39;s rare pieces of personal advice, and no phase of his own career better illustrated the point than his Mystic summers. In 1955 he had helped found the Munson Institute in American Maritime History, generously endowed by the Mallory family, and for the next twenty years he served as coordinator and director. Some of his graduate students who had done work in maritime history were invited to give lectures, and a few of us were even asked back. In 1966, when his colleague Jack Kemble took the summer off, Bob invited me to substitute, and for the next decade or so Jack and I split the job. Our responsibilities included chauffeuring Bob around to his favorite area restaurants, namely, those with a view of a swimming pool and its bikini-clad patrons. After 1965, when the Blunt White Library was opened at Mystic, Bob had on hand a first-rate col1.ection of research materials. The museum staff thoroughly enjoyed his good humor, and the annual cocktail party he gave slowed the place down for several days thereafter. It was at Mystic that Bob did much of his later writing, the most recent edition of his Bibliography, for example, many of the sketches that went into Five Centuries of Famous Ships, and the final drafts of his contribution to New England and the Sea. And it was to Mystic he came in 1979 after he was no longer able to live at the Harvard Faculty Club. In his last years, Bob continued to take a lively interest in current events, subscribing to two daily newspapers, and a newsmagazine, but disdaining television. He read voraciously, and , as he said , discovered Westerns just in time, for he had read almost every other sort of adventure literature. Whenever he was asked how he had spent the day, Bob&#39;s invariable answer was &quot;just being thoroughly lazy.&quot; Although his body gradually gave out over the last months, mentally he was anything butÂˇ lazy. To the very end of his life he enjoyed a good conversation, recalling facts and anecdotes from his seemingly endless store of knowledge. Bob Albion did not leave much in the way of worldly goods behind . His legacy was far more valuable : an unquenchable spirit, a love oflife and of people, and half-a-dozen of the finest books in maritime history that we are likely to see for years to come . .:ti SEA HISTORY, FALL 1984