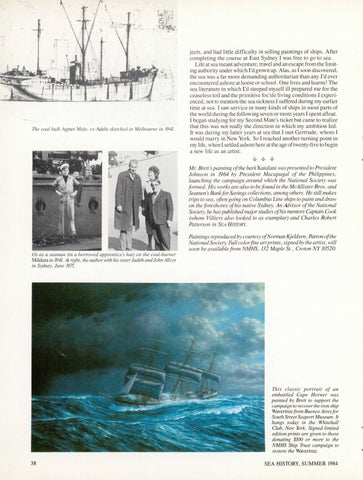 jects, and had little difficulty in selling paintings of ships. After co mpleting the course at East Sydney I was free to go to sea. Life at sea meant adventure, travel and an escape from the limiting authority under which I&#39;d grown up. Alas, as l soon discovered, the sea was a far more demanding authoritarian than any I&#39;d eve r e nco untered ashore at home or school. One lives and learns&#39; The sea literature in which I&#39;d steeped myself ill prepared me for the ceaseless toil and the primitive foc&#39;sle li ving conditions I expe ri enced , not to mention the sea sickness I suffered during my earlier time at sea . I saw service in many kinds of ships in most parts of the world during the following seven or more years I spent afloat. I began studying for my Second Mate&#39;s ticket but came to realize that this was not really the direction in which my amb ition led. It was during my latter years at sea th at I met Gertrude, whom I would marry in New York. So I reached another turning point in my life, when I settled ashore here at the age of twenty-five to begin a new life as an artist. &#39;1i &#39;1i w

M1: Brett painting ofthe bark Kaiulani was presemed to President Johnson in 1964 by President Macapagal of the Philippines , launching the campaign around which the National Society was formed. His works are also to be found in the McAllister Bros. and Seamen Bank for Savings collections, among others. He still makes trips to sea , often going on Columbus line ships to paint and draw on the foreshores of his native Sydney. An Advisor of the National Society, he has published major studies ofhis mentors Captain Cook (whom Villiers also looked to as examplar) and Charles Robert Patterson in SEA HISTORY.

This classic portrait of an embattled Cape Horner was painted by Brett to support the campaign to recover the iron ship Wavertree from Buenos Aires for South Street Seaport Mus eum. IT hangs today in the Whitehall Club, New York. Signed limited edition prints are given to rhose donating $100 or more to the NMHS Ship Trust campaign To restore the Wavertree.