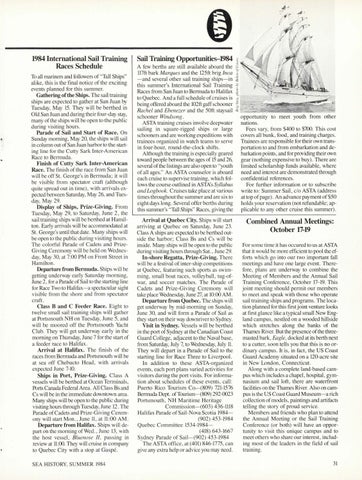 1984 International Sail Training Races Schedule To all mariners and followers of &quot;Tall Ships&quot; alike, this is the final notice of the exciting events planned for this summer. Gathering of the Ships. The sail training ships are expected to gather at San Juan by Tuesday, May 15. They will be berthed in Old San Juan and during their four-day stay, many of the ships will be open to the public during visiting hours. Parade of Sail and Start of Race. On Sunday morning, May 20, the ships will sail in column out of San Juan harbor to the starting line for the Cutty Sark Inter-American Race to Bermuda. Finish of Cutty Sark Inter-American Race. The finish of the race from San Juan will be off St . George&#39;s in Bermuda; it will be visible from spectator craft (although quite spread out in time), with arrivals expected between Saturday, May 26, and Tuesday, May 29. Display of Ships, Prize-Giving. From Tuesday, May 29, to Saturday, June 2 , the sai l training ships will be berthed at Hamilton. Early arrivals will be accommodated at St. George&#39;s until that date. Many ships will be open to the public during visiting hours. The colorful Parade of Cadets and PrizeGiving Ceremony will be held on Wednesday, May 30, at 7:00 PM on Front Street in Hamilton. Departure from Bermuda. Ships will be getting underway early Saturday morning, June 2 , for a Parade of Sail to the starting line for Race Two to Halifax- a spectacular sight visible from the shore and from spectator craft. Class B and C Feeder Race. Eight to twelve small sail training ships will gather at Portsmouth NH on Tuesday, June 5, and will be moored off the Portsmouth Yacht Club. They will get underway early in the morning on Thursday, June 7 for the start of a feeder race to Halifax. Arrival at Halifax. The finish of the races from Bern1uda and Portsmouth will be at sea off Chebucto Head , with arrivals expected June 7-10. Ships in Port, Prize-Giving. C lass A vessels will be berthed at Ocean Terminals, Ports Canada Federal Area. ALI Class Bs and Cs will be in the immediate downtown area. Many ships will be open to the public during visiting hours through Tuesday, June 12. The Parade of Cadets and Prize-Giving Ceremony will start Mon. , June II , at 11 :00 AM. Departure from Halifax. Ships will depart on the morning of Wed ., June 13, with the host vessel, Bluenose II, passing in review at 11:00. They will cruise in company to Quebec City with a stop at Gaspe. SEA HISTORY, SUMMER 1984

A few berths are still available aboard the 117ftdbark Ma rquhes an~ the.125ft bhr.ig Inca - an severa1 ot er sa1 trammg s 1ps- m this summer&#39;s International Sail Training Races from San Juan to Bermuda to Halifax to Quebec. And a full schedule of cruises is being offered aboard the !02ft gaff schooner Rachel and Ebenezer and the 50ft staysail schooner Windsong . ASTA training cruises involve deepwater sailing in square-rigged ships or large schooners and are working expeditions with trainees organized in watch teams to serve in four-hour, round-the-clock shifts . Although the training is especially geared toward people between the ages of 15 and 26, several of the listings are also open to &quot;youth of all ages.&quot; An ASTA counselor is aboard each cruise to supervise training, which follows the course outlined in ASTA&#39;s Syllabus and Logbook. Cruises take place at various times throughout the summer and are six to eight days long. Several offer berths during this summer&#39;s &quot;Tall Ships&quot; Races, giving the

Arrival at Quebec City. Ships will start arriving at Quebec on Saturday, June 23. Class A ships are expected to be berthed outside the harbor ; Class Bs and Cs wi ll be inside. Many ships will be open to the public during visiting hours through Sat. , June 29. In-shore Regatta, Prize-Giving. There will be a festival of inter-ship competitions at Quebec, featuring such sports as sw imming, small boat races, volleyball , tug-ofwar, and soccer matches. The Parade of Cadets and Prize-Giving Ceremony will take place Wednesday, June 27, at 10:00 AM. Departure from Quebec. The ships will get underway by mid-morning on Sunday, June 30, and will form a Parade of Sail as they start on their way downriver to Sydney. Visit in Sydney. Vessels will be berthed in the port of Sydney at the Canadian Coast Guard College, adjacent to the Naval base, from Saturday, July 7, to Wednesday, July 11. They will depart in a Parade of Sail to the starting line for Race Three to Liverpool. In addition to these ASTA-organized events, each port plans varied activities for visitors during the port visits. For information about schedules of these events, call: Puerto Rico Tourism Co,-(809) 721-1576 Bermuda Dept. ofTourism-(809) 292-0023 Portsmouth , NH Maritime Heritage Commission-(603) 436-1118 Halifax Parade of Sail-Nova Scotia 1984(902) 453-1984 Q uebec Comm ittee 1534-1984(418) 643-1667 Sydney Parade of Sail - (902) 453-1984 The ASTA office, at (401) 846-1775, can give any extra help or advice you may need.

Ji ~- - _.. opportunity to meet youth from other nations. Fees vary, from $400 to $700. This cost covers all bunk, food , and training charges. Trainees are responsible for their own transportation to and from embarkation and debarkation points, and for providing their own gear (nothing expensive to buy) . There are limited scholarship funds available, where need and interest are demonstrated through confidential references. For further information or to subscribe write to : Summer Sail, c/o ASTA (address at top of page). An advance payment of $50 holds your reservation (not refundable ; applicable to any other cruise this summer).

Combined Annual Meetings: October 17-19 For some time it has occured to us at ASTA that it would be more efficient to pool the efforts which go into our two important fall meetings and have one large event . Therefore, plans are underway to combine the Meeting of Members and the Annual Sail Training Conference, October 17-19. This joint meeting should permit our members to meet and speak with those who operate sail training ships and programs. The location planned for this first joint venture looks at first glance like a typical small New England campus, nestled on a wooded hillside which stretches along the banks of the Thames River. But the presence of the threemasted bark, Eagle, docked at its berth next to a cutter, soon tells you that this is no ordinary campus. It is, in fact , the US Coast Guard Academy situated on a 120-acre site in New London , Connecticut. Along with a complete land-based campus which includes a chapel, hospital , gymnasium and sail loft , there are waterfront facilities on the Thames River. Also on campus is the US Coast Guard Museum-a rich collection of models, paintings and artifacts telling the story of proud service. Members and friends who plan to attend the Annual Meeting or the Sail Training Conference (o r both) will have an opportunity to visit this unique campus and to meet others who share our interest , including most of the leaders in the field of sail training. 31