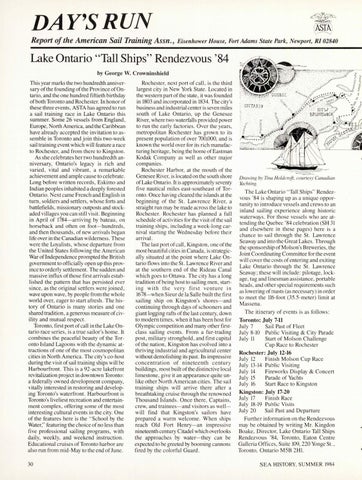 Lake Ontario &quot;Tall Ships&quot; Rendezvous &#39;84 by George W. Crowninshield This year marks the two hundredth anniversary of the fo unding of the Prov ince of Onta rio, and the one hund red fifti eth birthday of both Toronto and Rochester. In honor of these three events, ASTA has agreed to run a sail training race in Lake Ontario this summer. Some 26 vessels from England , Europe, North America, and the Caribbean have already accepted the invitation to assemble in Toronto and j oin this two-week sail training event which will feature a race to Rochester, and from there to Kingston. As she celebrates her two hundredth anni versary, Ontario&#39;s legacy is rich and varied , vital and vibrant , a remarkable achievement and ample cause to celebrate. Long before written records, Eskimo and Indian peoples inhabited a deeply forested Ontario. Next came French and E nglish in turn , soldiers and settlers, whose fo rts and battlefields, missionary outposts and stockaded villages you can still visit. Begi nning in April of 1784- arriv ing by bateau, on horseback and often on foo t- hund reds, and then thousands, of new arri vals began life over in the Canadian wilderness. These were the Loyalists, whose departure from the United States fo llow ing the Ameri can War oflndependence pro mpted the British government to offi ciall y open up this province to orderl y settl ement. The sudden and massive influx of those first arri vals established the pattern that has persisted ever since, as the orig inal settle rs were j oined, wave upon wave, by peo ple from the whole world over, eager to start afresh . The history of Ontario is many stories and one shared tradition , a generous measure of civility and mutual respect. Toronto, first port of call in the Lake On tario race series, is a true sail or&#39;s home. It combines the peaceful beauty of the To ronto Island Lagoo ns with the dynamic attractions of one of the most cosmopo litan cities in North America. The city&#39;s co-host during the visit of sail tra ining ships will be Harbourfront. This is a 92-ac re lakefro nt revitalization project in downtown Toronto: a fed erall y owned development company, vitally interested in restoring and developing Toronto&#39;s waterfront . Harbourfro nt is Toronto&#39;s li veliest recreation and entertainment complex , offering some of the most interesting cultural events in the city. One of the fea tures here is the &quot; School by the Water,&quot; featuring the choice of no less than fi ve professional sailing programs, with daily, weekly, and weekend instruction. Educational cruises of Toronto harbor are al so run from mid-May to the end of June. 30

Rochester, next port of call , is the third largest city in New York State. Located in the western part of the state, it was fo unded in 1803 and incorporated in 1834. The city&#39;s business and industri al center is seven miles south of Lake Ontari o, up the Genesee River, where two waterfalls prov ided power to run the early fac tories . Ove r the years, metropolitan Rochester has grown to its present popul atio n of over 700,000, and is known the wo rl d over fo r its rich manufacturing heri tage, being the home of Eastman Kodak Company as well as other maj or companies . Rochester Harbo r, at the mouth of the Genesee Ri ver, is located on the south shore of Lake Ontario. It is approximately seventy five nautical mil es east-southeast of Toronto. Once hav ing cleared the islands at the beginning of the St. Lawrence Ri ve r, a straight run may be made ac ross the lake to Rochester. Rochester has planned a full schedule of acti vities fo r the visit of the sail tra ining ships, includi ng a week-long carni val starting the Wednesday before thei r arri val. The last port of call , Kingston, one of the most beauti fu l cities in Canada , is strategicall y situated at the point where Lake Onta ri o fl ows into the St. Lawrence Ri ve r and at the southe rn end of the Rid eau Canal which goes to Ottawa. The city has a long tradition of being host to sailing men, startin g w ith th e very fi rst ve ntu re in 1678- when Sieur de la Sall e built the first sa iling ship on Kingston&#39;s shores-and continuing th rough days of schooners and giant logging rafts of the last centu ry, down to modern times , when it has been host for Olympic competition and many other firstclass sailing events. From a fur-trading post, military stronghold , and first capital of the nation , Kingston has evolved into a thriving indu strial and agricultural center without demolishing its past. Its impressive co nce ntrati o n of nineteenth ce ntury buildings, most bu ilt of the distinctive local limestone , g ive it an appea rance quite unlike other North American cities. The sai l training ships will arri ve there after a breathtaking cruise through the renowned Thousand Islands. Once there, Captains, crew, and trainees-and visito rs as well will find that Kings ton&#39;s sailo rs have prepared a wa rm welcome. When ships reach Old Fo rt Henry-an impress ive nineteenth centu ry Citadel which overlooks the approaches by water- they can be expected to be greeted by booming cannons fired by the colorful Guard.

The Lake Ontari o &quot; Tall Ships&quot; Rendezvo us &#39; 84 is shapi ng up as a unique opportunity to introduce vessels and crews to an inl and sailing experience along hi sto ri c waterways. For those vessels who a re attending the Quebec &#39;84 celebration (SH 31 and elsewhere in these pages) here is a chance to sail th rough the St. Lawrence Seaway and into the Great Lakes. Through the sponso rship ofM olson&#39;s Breweries, the Joint Coordinating Committee fo r the event will cover the costs of entering and exiting Lake Ontari o th ro ugh the St . Lawrence Seaway ; these will include: pilotage, lockage, tug a nd lines man ass istance, portable heads, and other special requirements such as lowering of masts (as necessary) in order to meet the 116-foot (3 5.5-rneter) limit at Massena. The itinerary of events is as foll ows: