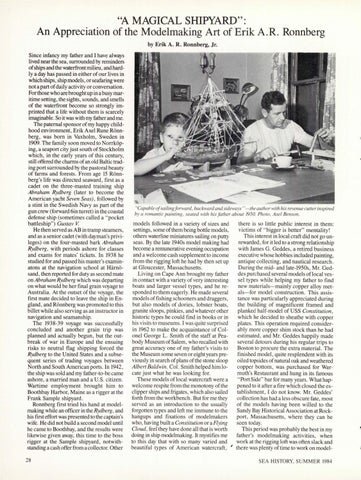 SHIPYARD&quot;: An Appreciation of the Modelmaking Art of Erik A.R. Ronnberg by Erik A. R. Ronnberg, Jr. Since infancy my father and I have always lived near the sea, surrounded by reminders of ships and the waterfront milieu , and hardly a day has passed in either of our lives in which ships, ship models, or seafaring were not a part of daily activity or conversation. For those who are brought up in a busy maritime setting, the sights, sounds, and smells of the waterfront become so strongly imprinted that a life without them is scarcely imaginable. So it was with my father and me. The paternal sponsor of my happy childhood environment, Erik Axel Rune Ronnberg, was born in Vaxholm, Sweden in 1909. The family soon moved to Norrkoping, a seaport city just south of Stockholm which, in the early years of this century, still offered the charms of an old Baltic trading port surrounded by the pastoral beauty of farms and forests. From age 15 Ronnberg&#39;s life was directed seaward, first as a cadet on the three-masted training ship Abraham Rydberg (later to become the American yacht Seven Seas), followed by a stint in the Swedish Navy as part of the gun crew (forward 6in turret) in the coastal defense ship (sometimes called a &quot;pocket battleship&quot;) Gustav V. He then served as AB in tramp steamers, and as a senior cadet (with &lt;layman&#39;s privileges) on the four-masted bark Abraham Rydberg, with periods ashore for classes and exams for mates&#39; tickets. In 1938 he studied for and passed his master&#39;s examinatons at the navigation school at Harnosand, then reported for duty as second mate on Abraham Rydberg which was departing on what would be her final grain voyage to Australia. At the outset of the voyage, the first mate decided to leave the ship in England , and Ronnberg was promoted to this billet while also serving as an instructor in navigation and seamanship. The 1938-39 voyage was successfully concluded and another grain trip was planned and actually begun , but the outbreak of war in Europe and the ensuing risks to neutral flag shipping forced the Rydberg to the United States and a subsequent series of trading voyages between North and South American ports. In 1942 , the ship was sold and my father-to-be came ashore, a married man and a U.S. citizen. Wartime employment brought him to Boothbay Harbor, Maine as a rigger at the Frank Sample shipyard. Ronnberg first tried his hand at modelmaking while an officer in the Rydberg, and his first effort was presented to the captain&#39;s wife. He did not build a second model until he came to Boothbay, and the results were likewise given away, this time to the boss rigger at the Sample shipyard, notwithstanding a cash offer from a collector. Other

&quot;Capable ofsailingforward, backward and sideways &#39; &#39;-the author with his revenue cutter inspired by a romantic painting, seated with his father about 1950. Photo, Axel Benson.

models followed in a variety of sizes and settings, some of them being bottle models, others waterline miniatures sailing on putty seas. By the late 1940s model making had become a remunerative evening occupation and a welcome cash supplement to income from the rigging loft he had by then set up at Gloucester, Massachusetts. Living on Cape Ann brought my father in contact with a variety of very interesting boats and larger vessel types, and he responded to them eagerly. He made several models of fishing schooners and draggers, but also models of dories, lobster boats, granite sloops, pinkies, and whatever other historic types he could find in books or in his visits to museums. I was quite surprised in 1962 to make the acquaintance of Colonel George L. Smith of the staff at Peabody Museum of Salem, who recalled with great accuracy one of my father&#39;s visits to the Museum some seven or eight years previously in search of plans of the stone sloop Albert Baldwin. Col. Smith helped him locate just what he was looking for. These models of local watercraft were a welcome respite from the monotony of the clipper ships and frigates, which also sailed forth from the workbench. But for me they served as an introduction to the usually forgotten types and left me immune to the hangups and fixations of modelmakers who, having built a Constitution or a Flying Cloud, feel they have done all that is worth doing in ship modelmaking. It mystifies me to this day that with so many varied and beautiful types of American watercraft, &#39;

there is so little public interest in them: victims of &quot; bigger is better&quot; mentality! This interest in local craft did not go unrewarded , for it led to a strong relationship with James G. Geddes, a retired business executive whose hobbies included painting, antique collecting, and nautical research. During the mid- and late-1950s, Mr. Geddes purchased several models oflocal vessel types while helping my father to find new materials-mainly copper alloy metals-for model construction. This assistance was particularly appreciated during the building of magnificent framed and planked half-model of USS Constitution, which he decided to sheathe with copper plates. This operation required considerably more copper shim stock than he had estimated, and Mr. Geddes happily made several detours during his regular trips to Boston to procure the extra material. The finished model , quite resplendent with its oiled topsides of natural oak and weathered copper bottom , was purchased for Warmuth&#39;s Restaurant and hung in its famous &quot;Port Side&quot; bar for many years. What happened to it after a fire which closed the establishment, I do not know. Mr. Geddes&#39; collection has had a less obscure fate, most of the models having been willed to the Sandy Bay Historical Association at Rockport , Massachusetts , where they can be seen today. This period was probably the best in my father&#39;s modelmaking activities, when work at the rigging loft was often slack and there was plenty of time to work on modelSEA HISTORY, SUMMER 1984