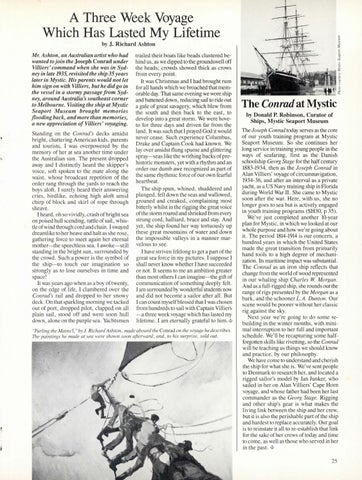 A Three Week Voyage Which Has Lasted My Lifetime by J. Richard Ashton Mr. Ashton, an Australian artist who had wanted to join the Joseph Conrad under Villiers' command when she was in Sydney in late 1935, revisited the ship 35 years later in Mystic. His parents would not let him sign on with Villiers, but he did go in the vessel in a stormy passage from Sydney, around Australia's southeast corner to Melbourne. Visiting the ship at Mystic Seaport Museum brought memories flooding back, and more than memories a new appreciation of Villiers' voyagini. Standing on the Conrad's decks amidst bright , chattering American kids, parents and tourists, I was overpowered by the memory of her at sea another time under the Australian sun. The present dropped away and I distinctly heard the skipper's voice, soft spoken to the mate along the waist , whose broadcast repetition of the order rang through the yards to reach the boys aloft. I surely heard their answering cries , birdlike, echoing high aloft amid chirp of block and skirl of rope through sheave. I heard , oh so vividly, crash of bright sea on poised hull scending, rattle of sail, whistle of wind through cord and chain . I swayed dreamlike to her heave and halt as she rose gathering force to meet again her eternai mother-the speechless sea. I awoke- still standing in the bright sun , surrounded by the crowd. Such a power is the symbol of the ship-to touch our imagination so strongly as to lose ourselves in time and space! It was years ago when as a boy of twenty, on the edge of life, I clambered over the Conrad 's rail and dropped to her snowy deck. On that sparkling morning we tacked out of port , dropped pilot , clapped on all plain sail, stood off and were soon hull down, alone on the purple sea. Yachtsmen

trailed their boats like beads clustered behind us, as we dipped to the groundswell off the heads ; crowds showed thick as crows from every point. It was Christmas and I had brought rum for all hands which we broached that memorable day. That same evening we wore ship and battened down, reducing sail to ride out a gale of great savagery, which blew from the south and then back to the east , to develop into a great storm . We were hoveto for three days and driven far from the land . It was such that I prayed God it would never cease. Such experience Columbus, Drake and Captain Cook had known. We lay over amidst flung spume and glittering spray-seas like the writhing backs of prehistoric monsters, yet with a rhythm and an order our dumb awe recognized as part of the same rhythmic force of our own fearful heartbeat. The ship spun, whined , shuddered and plunged, fell down the seas and wallowed groaned and creaked, complaining mos~ bitterly whilst in the rigging the great voice of the storm roared and shrieked from every strung cord, halliard, brace and stay. And yet , the ship found her way tortuously up these great mountains of water and down the impossible valleys in a manner marvelous to see. I have striven lifelong to get a part of the great sea force in my pictures. I suppose I shall never know whether I have succeeded or not. It seems to me an ambition greater than most others I can imagine-the gift of communication of something deeply felt. I am surrounded by wonderful students now and did not become a sailor after all. But I can count myself blessed that I was chosen from hundreds to sail with Captain Villiers - a three week voyage which has lasted my lifetime. I am eternally grateful to him.w

"Furling th e Mains '/, " by J. Richard Ashton , made aboard the Conrad on the voyage he describes. Th e pmnflngs he made al sea were shown soon afterward, and, to his surprise, sold ou1.

The Conrad at Mystic by Donald P. Robinson, Curator of Ships, Mystic Seaport Museum The Joseph Conrad today serves as the core of our youth training program at Mystic Seaport Museum. So she continues her long service in training young people in the ways of seafaring, first as the Danish schoolship Georg Stage for the half century 1883-1934, then as the Joseph Conrad in Alan Villiers' voyage of circumnavigation, 1934-36, and after an interval as a private yacht, as a US Navy training ship in Florida during World War II. She came to Mystic soon after the war. Here, with us, she no longer goes to sea but is actively engaged in youth training programs (SH30, p 35). We' ve just completed another 10-year plan for Mystic, in which we looked at our whole purpose and how we're going about it. The period 1814-1914 is our concern , a hundred years in which the United States made the great transition from primarily hand tools to a high degree of mechanization . Its maritime impact was substantial. The Conrad as an iron ship reflects that change from the world of wood represented in our whaling ship Charles W Morgan . And as a full-rigged ship, she rounds out the range of rigs presented by the Morgan as a bark , and the schooner L.A. Dunton. Our scene would be poorer without her classic rig against the sky. Next year we' re going to do some rebuilding in the winter months , with minimal interruption to her full and important schedule. We'll be recapturing some halfforgotten skills like rivetting, so the Conrad will be teaching us things we should know and practice, by our philosophy. We have come to understand and cherish the ship for what she is. We' ve sent people to Denmark to research her, and located a rigged sailor's model by Jan Junker, who sailed in her on Alan Villiers' Cape Horn voyage, and whose father had been her last commander as the Georg Stage. Rigging and other ship's gear is what makes the living link between the ship and her crew, but it is also the perishable part of the ship and hardest to replace accurately. Our goal is to reinstate it all to re-establish that link for the sake of her crews of today and time to come, as well as those who served in her in the past. w