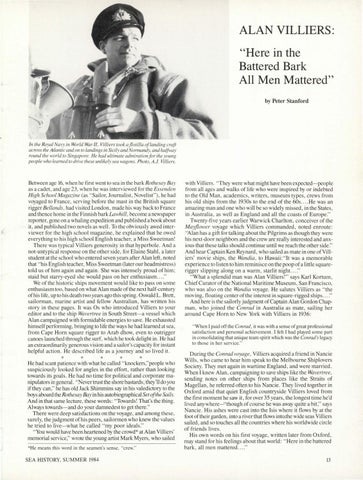 &quot;Here in the Battered Bark All Men Mattered&quot; by Peter Stanford

In 1he Royal Navy in World War II, Villiers !Oak aj701illa of landing craft across 1he Allamic and on 10 landings in Sicily and Normandy, and halfway round 1he world 10 Singapore. He had ul1i111a1ead111ira1ionfor 1he young people who lea m ed IOdrive 1hese unlikely sea ivagons. PholO, A.J. Villiers.

Between age 16, when he first went to sea in the bark Rothesay Bay as a cadet, and age 23, when he was interviewed for the Essenden High School Maga zine (as &quot; Sailor, Journalist , Novelist&quot; ), he had voyaged to France, serving before the mast in the British square rigger Bellands, had visited London , made his way back to France and thence home in the Finnish bark lawhill, become a newspaper reporter, gone on a whaling expedition and published a book about it , and published two novels as well. To the obviously awed interviewer for the high school magazine, he explained that he owed everything to his high school English teacher, a Miss Sweetman ! There was typical Villiers generosity in that hyperbole. And a not-untypical response on the other side, for Elaine Stahl , a later student at the school who entered seven years after Alan left, noted that &quot;his English teacher, Miss Sweetman (later our headmistress) told us of him again and again. She was intensely proud of him ; staid but starry-eyed she would pass on her enthusiasm ....&quot; We of the historic ships movement would like to pass on some enthusiasm too, based on what Alan made of the next half-century of his life, up to his death two years ago this spring. Oswald L. Brett , sailorman , marine artist and fellow Australian , has written his story in these pages. It was Os who introduced Villiers to your editor and to the ship Wavertree in South Street-a vessel which Alan campaigned with formidable energies to save. He exhausted himself performing, bringing to life the ways he had learned at sea, from Cape Horn square rigger to Arab dhow, even to outrigger canoes launched through the surf, which he took delight in: He had an extraordinarily generous vision and a sailor&#39;s capacity for instant helpful action. He described life as a journey and so lived it.

* * * * * He had scant patience with what he called &quot; knockers,&quot;people who suspiciously looked for angles in the effort, rather than looking towards its goals. He had no time for political and corporate manipulators in general. &quot;Never trust the shore bastards; they&#39;ll do you if they can,&quot; he has old Jack Shimrnins say in his valedictory to the boys aboard theRothesay &amp;yin his autobiographical Set ofthe Sails. And in that same lecture, these words: &quot; Towards! That&#39;s the thing. Always towards-and do your damnedest to get there.&quot; There were deep satisfactions on the voyage, and among these, surely, the judgment of his peers , sailormen who knew the values he tried to live-what he called &quot; my poor ideals .&quot; &quot; You would have been heartened by the crowd* at Alan Villiers&#39; memorial service,&quot; wrote the young artist Mark Myers, who sailed *He means this word in the seamen&#39;s sense, &quot;c rew.&quot;

with Villiers. &quot;They were what might have been expected-people from all ages and walks of life who were inspired by or indebted to the Old Man , academics, writers, museum types, crews from his old ships from the 1930s to the end of the 60s .... He was an amazing man and one who will be so widely missed , in the States, in Australia , as well as England and all the coasts of Europe.&quot; Twenty-five years earlier Warwick Charlton , conceiver of the Mayflower voyage which Villiers commanded, noted enroute: &quot;Alan has a g ift for talking about the Pilgrims as though they were his next-door neighbors and the crew are really interested and anxious that these talks should continue until we reach the other side.&quot; And hear Captain Ken Reynard, who sailed as mate in one of Villiers&#39; movie ships, the Wandia, to Hawaii: &quot; It was a memorable experience to listen to him reminisce on the poop of a little squarerigger slipping along on a warm , starlit night. . ..&quot; &quot;What a splendid man was Alan Villiers!&quot; says Karl Kortum, Chief Curator of the National Maritime Museum , San Francisco, who was also on the Wandia voyage. He salutes Villiers as &quot; the moving, floating center of the interest in square-rigged ships ... .&quot; And here is the sailorly judgment of Captain Alan Gordon Chapman , who joined the Conrad in Australia as mate, sailing her around Cape Horn to New York with Villiers in 1936 : &quot; When I paid off the Conrad, it was with a sense of great professional satisfaction and personal achi evement. I felt I had played some part in consolidating that unique team spirit which was the Conrad&#39;s legacy to those in her service.&quot;

During the Conrad voyage, Villiers acquired a friend in Nancie Wills, who came to hear him speak to the Melbourne Shiplovers Society. They met again in wartime England , and were married. When I knew Alan, campaigning to save ships like the Wavertree, sending notes on other ships from places like the Straits of Magellan , he referred often to his Nancie. They lived together in Oxford amid that quiet English countryside Villiers loved from the first moment he saw it , for over 35 years , the longest time he&#39;d lived anyw here-&quot;though of course he was away quite a bit,&quot; says Nancie. His ashes were cast into the Isis where it flows by at the foot of their garden , into a river that flows into the wide seas Villiers sailed , and so touches all the countries where his worldwide circle of friends lives. His own words on his first voyage, written later from Oxford , may stand for his feelings about that world: &quot; Here in the battered bark , all men mattered .. ..&quot;