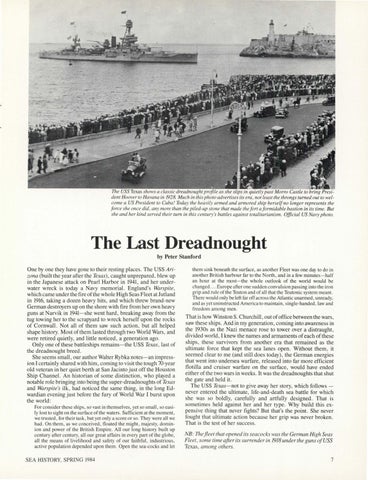 The USS Texas shows a classic dreadnought profile as she slips in quietly past Morro Castle to bring President Hoover to H_avana in 1928. Much in this photo advertises its era, not least the throngs turned out towelcome a US Pres1.dent to Cuba! Today th.e heavily armed and armored ship herself no longer represents the force she once did, any more than the piled-up stone that made the fort a formidab le bastion in its time. But she and her kind served their turn in this century&#39;s ba11les against totalitarianism. Official US Navy photo.

The Last Dreadnought by Peter Stanford One by one they have gone to their resting places. The USS Arizana (built the year after the Texas), caught unprepared , blew up in the Japanese attack on Pearl Harbor in 1941 , and her underwater wreck is today a Navy memorial. England&#39;s Warspite, which came under the fire of the whole High Seas Fleet at Jutland in 1916, taking a dozen heavy hits, and which threw brand-new German destroyers up on the shore with fire from her own heavy guns at Narvik in 1941-she went hard , breaking away from the tug towing her to the scrapyard to wreck herself upon the rocks of Cornwall. Not all of them saw such action , but all helped shape history. Most of them lasted through two World Wars, and were retired quietly, and little noticed , a generation ago. Only one of these battleships remains-the USS Tex.as, last of the dreadnought breed . She seems small , our author Walter Rybka notes-an impression I certainly shared with him , coming to visit the tough 70-year old veteran in her quiet berth at San Jacinto just off the Houston Ship Channel . An historian of some distinction , who played a notable role bringing into being the super-dreadnoughts of Texas and Warspite&#39;s ilk , had noticed the same thing, in the long Edwardian evening just before the fury of World War I burst upon the world: For consider these ships, so vast in themselves, yet so small , so easily lost to sight on the sur face of the waters. Sufficient at the moment , we trusted , for their task , but yet on ly a score or so. They were all we had. On them, as we conceived, floated the might , majesty, dominion and power of the British Empire. All our long history built up century after centu ry, all ou r great affa irs in every part of the globe, all the means of livelihood and safety of our faithful. industrious, act ive population depended upon them. Open the sea-cocks and let

them sink beneath the surface, as another Fleet was one day to do in another British harbour far to the North, and in a few minutes-half an hour at the most-the whole outlook of the world would be changed .... Europe after one sudden co nvulsion pass ing into the iron gnp and rule of the Teuton and of all that the Teutonic system meant. There would only be left far off across the Atlantic unarmed , unready, and as yet uninstructed America to maintain , single-handed , law and freedom among men .

That is how Winston S. Churchill , out of office between the wars saw these ships. And in my generation, coming into awareness i~ the 1930s as the Nazi menace rose to tower over a distraught divided world , I knew the names and armaments of each of thes~ ships, these survivors from another era that remained as the ultimate force that kept the sea lanes open. Without them , it seemed clear to me (and still does today) , the German energies that went mto undersea warfare, released into far more efficient flotilla and cruiser ~arfare on the surface, would have ended either of the two wars m weeks. It was the dreadnoughts that shut the gate and held it. The USS Tex.as-not to give away her story, which follows never entered the ultimate, life-and-death sea battle for which she was so boldly, carefully and artfully designed . That is someti mes held against her and her type. Why build this expensive thing that never fights? But that&#39;s the point. She never fought that ultimate action because her grip was never broken . That is the test of her success. NB: 7he fleet that opened its seacocks was the German High Seas Fleet, some time after its surrender in 1918 under the guns of USS Texas, among others. 7