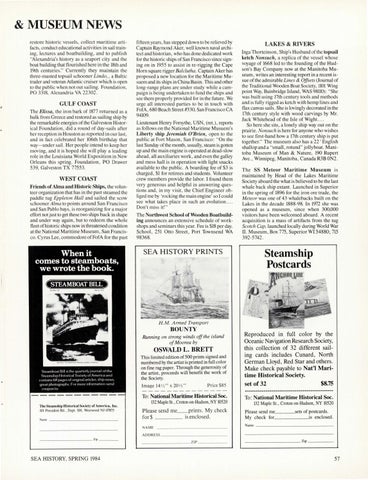 &amp; MUSEUM NEWS restore hi storic vessels, coll ect maritime artifacts, conduct educational activities in sai l training, lectures and boatbuilding, and to publish &quot;Alexandria&#39;s history as a seaport city and the boat building that flourished here in the 18th and 19th centuries.&quot; Currently they maintain the three-masted topsa il schoone r Lindo, , a Baltic trader and veteran Atlantic cruiser which is open to the public when not out sailing. Foundation , PO 33 18, Alexandria VA 22302.

GULF COAST The Elissa, the iron bark of 1877 returned as a hulk from Greece and restored as sailing ship by the remarkable energies of the Galveston Historical Foundation , did a round of day-sa il s after her reception in Houston as reported in our last, and in fact celebrated her 106th birthday that way-unde r sa il. Her people intend to keep he r moving, and it is hoped she will play a leading ro le in the Louisiana World Exposition in New Orleans this spring. Foundation , PO Drawer 539, Galveston TX 77553.

WEST COAST Friends of Alma and Historic Ships, the volunteer o rganization that has in the past steamed the paddle tug Eppleton Hall and sailed the scow schooner Alma to points arou nd San Francisco and San Pablo bays, is reo rganizi ng for a major effort not j ust to get these two ships back in shape and under way again , but to redeem the whole fleet of historic ships now in threatened condition at the National Maritime Museum, San Francisco. Cyrus Lee, commodore ofFofA for the past

fifteen years, has stepped down to be relieved by Captain Raymond Aker, well known naval architect and historian, who has done dedicated work for the historic ships of San Francisco since signing o n in 1955 to assist in re-rigging the Cape Ho rn square rigger Balclutha. Captain Aker has proposed a new location fo r the Maritime Musuem and its ships in China Basin. This and other long-range plans are under study wh il e a campaign is being undertaken to fu nd the ships and see them properly provided for in the future. We urge all inte rested parties to be in touch with FofA, 680 Beach Street #330, San Francisco CA 94109. Lieutenant Henry Forsythe, USN, (ret.), reports as follows on the National Maritime Musu em&#39;s Liberty ship Jeremiah O&#39;Brien, open to the public at Fort Mason , San Francisco: &quot;On the last Sunday of the month, usually, steam is gotten up a nd the main e ngine is operated at dead-s low ahead , all auxiliaries work, and even the galley a nd mess hall is in operation with light snac ks available to the public. A boarding fee of $3 is charged , $1 for retirees and students . Volunteer crew members provide the labor. I found them very generous a nd helpful in a nswe ring questio ns and, in my visit , the Chief Engineer obliged me by &#39;rocking the main engine&#39; so I cou ld see what takes place in such a n evolution .... Don&#39;t miss it 1&quot; The Northwest School of Wooden Boatbuilding announces an extensive schedule of workshops and seminars this year. Fee is $18 pe r day. Schoo l, 25 1 Otto Street , Port Townsend WA 98368.

LAKES &amp; RIVERS Inga Thorteinson , Ship&#39;s Husband of the topsail ketch Nonsuch, a replica of the vessel whose voyage of 1668 led to the founding of the Hud son&#39;s Bay Company now at the Manitoba Mu seum, writes an interesting report in a recent issue of the admirable Lines &amp; Offsets (Journal of the Traditional Wooden Boat Society, llOI Wing point Way, Bainbridge Island , WAS98ll0): &quot;She was built using 17th century tools and methods a nd is full y rigged as ketch with hemp lines and fl ax canvas sai ls. She is lov ingly decorated in the 17th century sty le with wood carvings by Mr. Jack Whitehead of the Isle of Wight. ... So here she sits, a lonely ship way out o n the prairie. Nonsuch is here for anyone who wishes to see first-hand how a 17th century ship is put togethe r.&quot; The museum also has a 22&#39; English shall o p a nd a &quot; small, rotund &quot; jolly boat. Mani toba Museum of Man &amp; Nature, 190 Rupert Ave., Winnipeg, Manitoba , Canada R3B ON2 . The SS Meteor Maritime Museum is maintained by Head of the Lakes Maritime Society aboard the what is believed to be the last whale back ship extant. Launched in Superior in the spring of 1896 for the iron o re trade, the Meteor was one of 43 whalebacks built on the Lakes in the decade 1888-98. In 1972 she was opened as a museum , since when 300,000 visito rs have been welcomed aboard . A recent acquisition is a mass of artifacts from the tug Scotch Cap, launched locally during World War II. Museum , Box 775, Superior WI 54880 ; 715 392-5742 .

BOUNTY Running on strong winds off the island of Moorea by

OSWALD L. BRETT This limited edition of 500 prints signed and numbered by the artist is printed in full color on fine rag paper. Through the generosity of the artist, proceeds will benefit the work of the Society. Image 14 V2 &quot; x 20 V2 &quot;

Please send me__ prints. My check for$ is enclosed.

Please send me._ _ _sets of postcards. My check for Âˇs enclosed.