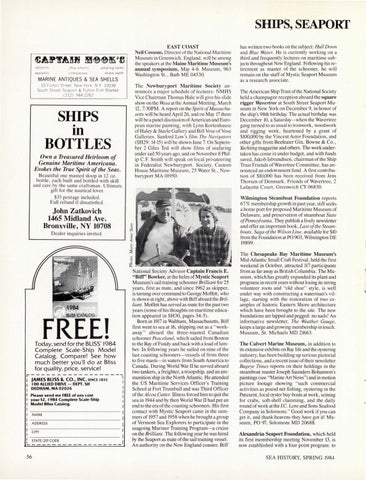 BOTTLES Own a Treasured Heirloom of Genuine Maritime Americana. Evokes the True Spirit of the Seas. Beautiful one masted sloop in 12 oz . bottle , each built and bottled with skill and care by the same craftsman. Ultimate gift for the nautica l lover. $35 postage included. Full refund if dissatisfied.

EAST COAST Neil Cossons, Director of the National Maritime Museum in Greenwich, England , will be among the speakers at the Maine Maritime Museum&#39;s annual symposium, May 4-6. Museum, 963 Washington St., Bath ME 04530. The Newburyport Maritime Society announces a major schedule of lectures: NMHS Vice Chairman Thomas Hale will give his slide show on the Wasa at the Annual Meeting, March 12, 7:30PM . A report on the Spirit ofMassachusells will be heard April 26, and on May 17 there will be a panel discussion of American and European marine painting, wi th Lynn Kortenhause of Haley &amp; Steele Gallery and Bill Vose of Vose Galleries. Sanford Low&#39;s film Th e Na vigators (SH29 : 14-15) will be shown June 7. On September 2 Giles Tod will show films of seafaring under sail 50 years ago, and on November 8 Philip C.F. Smith will speak on local privateering in Federalist Newburyport . Society, Custom House Maritime Museum , 25 Water St. , Newburyport MA 01950.

Today, send for the BLISS&#39; 1984 Complete Scale-Ship Model Catalog. Compare! See how much better you &#39;ll do at Bliss for quality, price, service!

The American Ship Trust of the National Society held a champagne reception aboard the square rigger Waverlree at South Street Seaport Museum in New York on December 9, in ho nor of the ship&#39;s 98th birthday. The actual birthday was December IO, a Saturday-when the Wavertree ga ng turned to as usual to ironwork , woodwork and rigging work , heartened by a grant of $100,000 by the Vincent Astor Foundation, and other gifts from Beefeater Gin, Bowne &amp; Co. , Yachting magazine and othe rs. The work undertaken has come in under budget, and with funds saved , Jakob Isbrandtsen, chairman of the Ship Trust Friends ofWavertree Committee, has announced an endownment fund. A first contribution of $10,000 has been received from Jens Thorsen of Denma rk. Friends of Wavertree, 2 Lafayette Court , Greenwich CT 06830. Wilmington Steamboat Foundation reports 67 % membership growth in past year, still seeks a home port for proposed Maritime Museum of Delaware, and preservation of steamboat State ofPennsylvania. They publish a lively newsletter and offer an important book , Last ofthe Steamboats, Saga ofthe Wilson Line, available for $10 from the Foundation at PO 903, Wilmington DE 19899.

has written two books on the subject: Hull Down and Blue Water. He is currently work ing on a third and frequently lectures o n maritime subjects throughout New England . Following his retirement as master of the schooner, he wi ll remain on the staff of Mystic Seaport Museum as a research associate.

National Society Advisor Captain Francis E. &quot; Biff&#39; Bowker, at the helm of Mystic Seaport Museum&#39;s sail training schooner Brilliant for 25 years, first as mate, and since 1962 as skipper, is turning over command to George Moffett , who is shown at right , above with Biff aboard the Brilliant. Moffett has served as mate for the past two years (some of his thoughts on maritime education appeared in SH30, pages 34-5). Born in 1917 in Waltham , Massachusetts, Biff first went to sea at 16, shipping out as a &quot;workaway&quot; aboard the three-masted Canadian schooner Peaceland, which sailed from Boston to the Bay ofFundy and back with a load oflumber. In following years he sailed on nine of the last coasting schooners-vessels of from three to five masts-in waters from South America to Canada. During World War II he served aboard two tankers, a freighter, a troopship, and an ammunition ship in the North Atlantic. He attended the US Maritime Services Officer&#39;s Training School at Fort Trumbull and was Third Officer of the Alcoa Cutter. Illness forced him to quit the sea in 1944 and by then World War II had put an end to the era of the coasting schooners. His first contact with Mystic Seaport came in the summers of 1957 and 1958 when he brought a group of Vermont Sea Explorers to participate in the seagoing Mariner Training Program-a cruise on the Brilliant. The following year he was hired by the Seaport as mate of the sail training vessel . An authority on the New England coaster, Bi ff

The Chesapeake Bay Maritime Museum&#39;s Mid-Atlantic Small Craft Festival, held the first weekend in October, attracted 117 participants from as fa r away as British Columbia. The Museum , which has greatly expanded its plant and programs in recent years without losing its strong volunteer roots and &quot;old shoe&quot; sty le, is well under way with constructi ng a waterman&#39;s village, starting with the restoration of two examples of historic Eastern Shore architecture which have been brought to the site. T he new foundations are lapped and pegged: no nails! An informative newsletter, The Weather Gauge, keeps a large and growing membership in touch . Museum , St. Michaels MD 21663. The Calvert Marine Museum, in add itio n to its extensive exhibits on Bay life and the oystering industry, has been building up serious pictorial collections, and a recent issue of their newsletter Bugeye Times reports on their holdings in the steamboat master Joseph Saunders Bohannon&#39;s paintings (see &quot; Marine Art News&quot;) and in motion picture footage showing &quot;suc h commercial activities as pound net fishing, oystering in the Patuxent, local oyster buy-boats at work , sei ning for crabs, soft-shell clamming, and the daily round of work at the J.C. Lore and Sons Seafood Company in Solomons.&quot; Good work if you can get it, and thank heavens they have got it! Museum , PO 97, Solomons MD 20688. Alexandria Seaport Foundation, which held its first me1mbership meeting November 13, is now establiished with a four point program: to SEA HISTORY, SPRING 1984