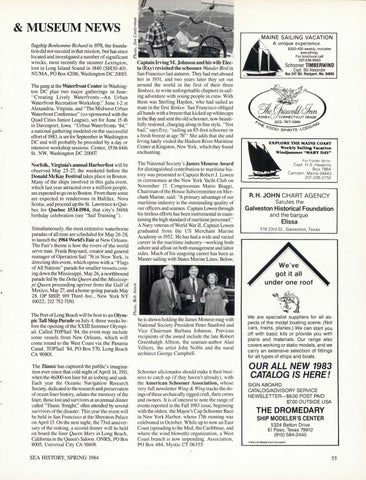 &amp; MUSEUM NEWS flagship Bonhomme Richard in 1978, the foundation did not succeed in that mission, but has since located and investigated a number of significant wrecks, most recently the steamer Lexington , lost in Long Island Sound in 1840 (SH30:40). NUMA , PO Box 42016, Washington DC 20015.

~ Captain Irving M. Johnson and his wife Electa (Exy) revisited the schooner l#Jnder Bird in San Francisco last autumn. They had met aboard her in 1931, and two years later they set out around the world in the first of their three llinkees, to write unforgettable chapters in sai ling adventure with young people in crew. With them was Sterling Hayden, who had sailed as mate in the first llinkee. San Francisco obliged all hands with a breeze that kicked up whitecaps in the Bay and sentthe old schooner, now beautifully restored, charging along in fine style. &quot; Not bad ,&quot; says Exy, &quot;sailing an 85-foot schooner in a fresh breeze at age 78!&quot; She adds that she and Irving lately visited the Hudson River Maritime Center at Kingston , New York , which they found enchanting.

The gang at the Waterfront Center in Washington DC plan two major gatherings in June: &quot;C reating Lively Waterfronts-An Urban Waterfront Recreation Workshop,&quot; June 1-2 at Alexandria, Virginia, and &quot; The Midwest Urban Waterfront Conference&quot; (co-sponsored with the Quad Cities Junior League) , set for June 15-16 in Davenport, Iowa. &quot; Urban Waterfronts &#39;84,&quot; a national gathering modeled on the successful effort of 1983, is set for September in Washington DC and will probably be preceded by a day or intensive workshop sessions. Center, 1536 44th St. NW, Washington DC 20007. Norfolk, Virginia&#39;s annual Harborfest will be observed May 25-Tl, the weekend before the Donald McKay Festival takes place in Boston . Many of the ships involved in this gala event, which last year attracted over a million people, are expected to go on to Boston. From there some are expected to rendezvous in Halifax, Nova Scotia, and proceed up the St. Lawrence to Quebec for Quebec 1534-1984, that city&#39;s 560th birthday celebration (see &quot;Sail Training&quot;) . Simultaneously, the most extensive waterborne parades of all time are scheduled for May 26-28, to launch the 1984 World&#39;s Fair at New Orleans. The Fair&#39;s theme is how the rivers of the world serve man. Frank Braynard, creator and general manager of Operation Sail &#39;76 in New York , is directing this event, which opens with a &quot;Flags of All Nations&quot; parade for smaller vessels coming down the Mississippi, May 26, a northbound parade led by the Delta Queen and the Mississippi Queen proceeding upriver from the Gulf of ยง Mexico, May Tl, and a home-going parade May ~ 28. OP SHIP, 919 Third Ave., New York NY -&lt;&gt; 10022; 212 752-7150. ~ The Port of Long Beach will be host to an Olympic Tall Ship Parade on July 4, three weeks before the opening of the XXIll Summer Olympiad. Called TOPSail &#39;84, the event may include some vessels from New Orleans, which will come round to the West Coast via the Panama Canal. TOPSail &#39;84, PO Box 570, Long Beach CA 90801. The Titanic has captured the public&#39;s imagination ever since that cold night of April 14, 1911, when the 46,000-ton liner hit an iceberg and sank. Each year the Oceanic Navigation Research Society, dedicated to the research and preservation of ocean liner history, salutes the memory of the liner, those lost and survivors at an annual dinner called &#39;Titanic Tonight,&#39;&#39; often attended by several survivors of the disaster. This year the event will be held in San Francisco at the Sheraton Palace on April 13. On the next night, the 73rd anniversary of the sinki ng, a second dinner will be held on board the liner Queen Mary in Long Beach, California in the Queen&#39;s Saloon. ONRS, PO Box 8005, Universal City CA 91608. SEA HISTORY, SPRING 1984

The National Society&#39;s James Monroe Award for distinguished contribution to maritime histo ry was presented to Captain Robert J. Lowen in ceremonies al&#39;the New York Yacht Club on November 17. Congressman Mario Biaggi , Chairman of the House Subcommittee on Merchant Marine, said: &quot;A primary advantage of our maritime industry is the outstanding quality of our officers and seamen. Captain Lowen through his tireless efforts has been instrumental in maintaining the high standard of maritime personnel.&quot; A Navy veteran of World War II, Captain Lowen graduated from the US Merchant Marine Academy in 1952. He has had a wide and varied career in the maritime industry-working both ashore and afloat on both management and labor sides. Much of his seagoing career has been as Master sailing with States Marine Lines. Below,

Schooner aficionados should make it their business to catch up (if they haven&#39;t already) , with the American Schooner Association, whose very full newsletter Wing &amp; Wing tracks the doings of these archaically rigged craft, their crews and owners . It is of interest to note the range of events reported in the Fall 1983 issue, beginning with the oldest, the Mayor&#39;s Cup Schooner Race in New York Harbor, whose 17th running was celebrated in October. While up to now an East Coast (spreading to the Med, the Caribbean , and where the wind bloweth) organization , a West Coast branch is now impending. Association , PO Box 484, Mystic CT 06355.

We are specialist suppliers for all aspects of the mod~I boating scene. (Not cars, trains , planes.) We can start you off with basic kits or provide you with plans and materials. Our range a lso covers working or static models, and we carry an extensive selection of fittings for all types of ships and boats.