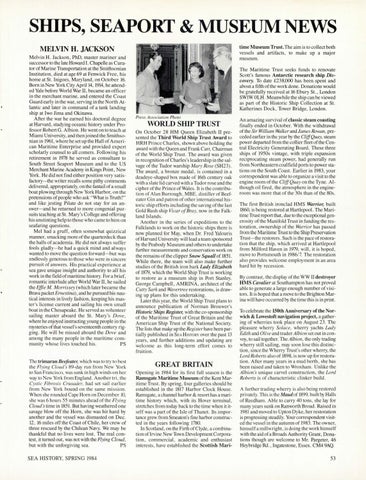 SHIPS, SEAPORT & MUSEUM NEWS time Museum Trust. The aim is to collect both vessels and arti facts, to make up a major museum.

MELVIN H. JACKSON Melvin H . Jackson , PhD, master marine r and successor to the late Howard I. Chapelle as C urator of Marine Transportation at the Smithsonia n Institution, died at age 69 at Fenwick Free, hi s home at St. Inigoes, Maryland , on Octobe r 16. Born in New York City April 14, 1914, he attend ed Yale before World War II , became an offi cer in the merchant marine, and entered the Coast Guard early in the war, serving in the North Atlantic and later in command of a tank land ing ship at Iwo Jima and Okinawa. A fter the war he earned his doctoral degree at Harvard , studying oceanic history under Professor Robert G. Albion. He went on to teach at Miami University, and then joined the Smithsonian in 1961 , where he set up the Hall of Amer ican Maritime Enterpri se and prov ided expert scholarly counsel to all comers. Follow ing hi s retirement in 1978 he served as consul tant to South Street Seaport Mu seum and to the US Merchant Marine Academy in Kings Point, New York. He did not find either pos ition very sati sfactory-the writer recall s some pithy comments delivered , appropriately, on the fantail ofa sma ll boat plowing th rough New York Harbor, on the pretensions of people who ask " What is Truth?" and like jesting Pilate do not stay for a n a nswer-and he returned to mo re congen ia l pursuits teaching at St. Mary 's College and offering his unstinting help to those who came to him o n seafaring questions. Mel had a gruff, often somewhat qui zz ical manner, smacki ng more of the quarterdeck tha n the hall s of academia. He did not always su ffer fools gladl y- he had a quick mind and a lways wanted to move the question fo rward- bu t was end less ly generous to those who were in sincere pursuit of answers. Hi s practi cal experi ence at sea gave unique insight and authority to a ll hi s work in the fi eld of maritime history. For a brief, romantic interlude after World War II, he sa il ed the Effie M. Morrissey (which later became the Brava packet Ernestina), and he pursued his nautical interests in lively fas hion, keeping hi s master's li cense current and sa iling hi s ow n s ma ll boat in the Chesapeake. He served as volunteer sailing master aboa rd the St. Mary 's Dove, where he enjoyed instructi ng young people in the mysteries of that vessel's seventeenth century rigging. He will be missed aboard the Dove and among the many peopl e in the mari time co m PS munity whose li ves touched his.

The tr ima ran Beefeater, which was to try to best the Flying Cloud 's 89-day ru n from New York to San Francisco, was sun k in high wi nds o n her way to New York from England. Another tri , the Cys1ic Fibrosis Crusader, had set sa il ear li er from New Yo rk bound on the same miss io n. When she rounded Cape Horn on December 10, she was 6 hours 55 minutes ahead of the Flying Cloud 's time in 1851. But hav ing weathered one savage bl ow off the Horn , she was hit hard by another and the vessel was dismasted on D ec. 12 , 16 miles off the Coast of C hil e, her crew of three rescued by the Chil ean Navy. We may be thankfu l that no lives were lost. The real contest, it turned out, was not with the Flying Cloud, PS but with the un fo rgiving sea. SEA HISTORY, SPRING 1984

The Maritime Tru st seeks fund s to renovate Scott's fam ous Antarctic research ship Discovery. To date ÂŁ238,000 has been spent and about a fifth of the work done. Donations would be gratefull y received at 16 Ebury St. , London SWlW OLH . Meanwhile the ship can be viewed as part of the Hi storic Ship Coll ecti on at St. Katherines Dock, Tower Bridge, London . Press Association Photo

WORLD SHIP TRUST O n October 28 HM Queen Eli zabeth II presented the Third World Ship Trust Award to HRH Prince Charl es, show n above holding the award with the Queen and Frank Carr, Chairman of the World Ship Tru st. The awa rd was given in recognition of Charl es's leadershi p in the salvage of the Tudor warship Mary Rose (SH23). The award , a bronze medal, is conta ined in a deadeye-shaped box made of 16th century oak with a slate 1id carved with a Tudor rose and the cipher of the Prince of Wales. It is the co ntribu tion of Alan Bur rough, MBE , di still er of Beefeater G in and patro n of other international hi storic shi p efforts incl ud ing the sav ing of the last Gold Rush ship Vicar of Bray, now in the Falkland Islands. Another in the series of exped iti ons to the Falkl ands to wo rk on the histo ric ships there is now pl anned for May, when Dr. Fred Yalouri s of Harvard University will lead a team sponsored by the Peabody Museum and others to undertake fu rther measurements and conservation work on the remains of the clipper Snow Squall of 1851 . W hile there, the team will also make further studies of the Bri tish iro n bark Lady Elizabeth of 1879, whi ch the World Ship Tru st is wo rking to restore as a museum ship in Po rt Stanl ey. George Campbell , AMRI NA , architect of the Cut1y Sark and Wavertree restorations, is drawing up plans fo r thi s undertaking. Later thi s year, the Wo rld Ship Trust pl ans to announce publi cation of No rman Brouwer's Historic Ships Register, with the co-sponsorship of the Maritime Trust of Great Britain and the American Ship Trust of the Nat ional Society. The li sts that ma]\e up the Register have been partiall y pu blished in SEA H1sroRY over the past 13 years, and fu rther additions and updating are welcome as this long-term effort comes to fru ition.

GREAT BRITAIN Openi ng in 1984 for its first full season is the Ramsgate Maritime Museum of the Kent Mariti me Tru st. By spring, four galleries should be established in the 1817 Harbor Clock House. Ramsgate, a channel harbor & resort has a mari time hi story whi ch , with its Hover terminal, stretches from today back to the time when it itself was a part of the Isle of Thanet. Its importance grew from Smeaton's fi ne harbor constructed in the years fo ll ow ing 1780. In Scotl and , on the Firth of C lyde, a combination oflrv ine New Town Development Corporation, commercial, academic and enthusiast interests, have established the Scottish Mari-

A n amazing survival of classic steam coasting fi nally ended in October. With the withdrawal of the Sir William l#ilker and James Rowan , preceded earlier in the year by the Cliff Quay, steam power departed from the collier fl eet of the Central Electricity Generating Board . These three ships of 1950s vintage, with tripl e expansion reciprocating steam power, had generally run fro m No rtheastern coalfield ports to power stations on the South Coast. Earlier in 1983, your correspondent was abl e to organize a visit to the engine room of the Cliff Quay on the Tyne. Although oil fired , the atmosphere in the engineroom was more that of the 30s than of the 80s. The first British ironclad HMS Warrior, built 1860, is being restored at Hartlepool. The Maritime Trust report that, due to the exceptional generos ity of the Manifold Trust in fu nding the restoration , ow nership of the Wa rrior has passed from the Maritime Trust to the Ship Preservation Trust- the restorers. Such is the pace of restoration that the ship, which arrived at Hartl epool from Mil fo rd Haven in 1979, will , it is hoped , move to Portsmouth in 198617. The restoration also prov ides welcome employ ment in an area hard hit by recession. By contrast , the displ ay of the WW II destroyer HMS Cavalier at Southampton has not proved able to generate a large enough number of visitors. It is hoped that a move to the Brighton Marina will have occurred by the time this is in print. To celebrate the 150th Anniversary of the Norwich & Lowestoft navigation project, a gathering of wherries took pl ace on August 23. The pl easure wherry Solace, wherry yachts Lady E.di1h and Olive and trader Albion set out in convoy, to sail together. The Albion , the only trading wherry still sa iling, may soon lose thi s distinction , since the Wherry Trust's other wherry, the Lord Roberts also of 1898, is now up fo r restorati on. After many years in a mud berth , she has been rai sed and taken to Wrox ham. Un like the Albion 's unique carve! construction , the Lord Roberts is of characteri sti c cl inker build . A fu rther trading wherry is also being res tored privately. This is the Maud of 1899, built by Hall s ofReedham. Abl e to carry 40 tons, she lay fo r many years sunk on Ranworth Broad. Raised in 1981 and moved to Upton Dyke, her restoration is progressing steadily. Your correspondent visited the vessel in the autumn of 1983. The owner, himselfa mill wright, is doi ng the work himself with the aid of a Broads Authority Grant , Donations though are welcome to Mr. Pargeter, 46 Heybridge Rd. , Ingatestone, Essex. CM4 9AQ. 53