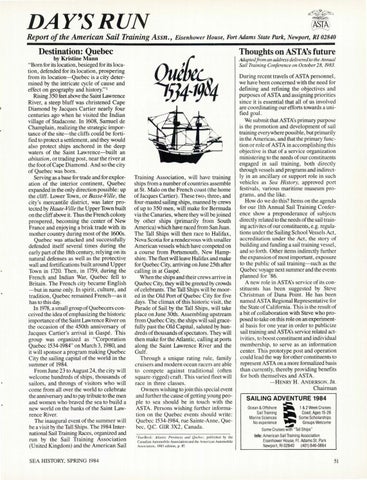 Destination: Quebec by Kristine Mann &quot;Born for its location, besieged for its location , defended for its location , prospering from its location- Quebec is a city determined by the intricate cycle of cause and effect on geography and history.&quot; 1 Rising 350 feet above the Saint Lawrence River, a steep bluff was christened Cape Diamond by Jacques Cartier nearly four centuries ago when he visited the Indian village of Stadacone. In 1608, Samuel de Champlain , realizing the strategic importance of the site-the cliffs could be fortified to protect a settlement, and they would also protect ships anchored in the deep waters of the Saint Lawrence-built an abitation, ortrading post , near the river at the foot of Cape Diamond . And so the city of Quebec was born. Serving as a base for trade and for exploration of the interior continent, Quebec expanded in the only direction possible: up the cliff. Lower Town, or Basse-Ville, the city&#39;s mercantile district, was later protected by Haute-Ville the Upper Town built on the cliff above it. Thus the French colony prospered , becoming the center of New France and enjoying a brisk trade with its mother country during most of the 1600s. Quebec was attacked and successfully defended itself several times during the early part of the 18th century, relying on its natural defenses as well as the protective wall and fortifications built around Upper Town in 1720. Then, in 1759, during the French and Indian War, Quebec fell to Britain . The French city became English - but in name only. In spirit, culture, and tradition , Quebec remained French-as it has to this day. In 1978, a small group of Quebecers conceived the idea of emphasizing the historic importance of the Saint Lawrence River on the occasion of the 450th anniversary of Jacques Cartier&#39;s arrival in Gaspe. This group was organized as &quot;Corporation Quebec 1534-1984&quot; on March 3, 1980, and it will sponsor a program making Quebec City the sailing capital of the world in the summer of 1984. From June 23 to August 24, the city will welcome hundreds of ships , thousands of sailors, and throngs of visitors who will come from all over the world to celebrate the anniversary and to pay tribute to the men and women who braved the sea to build a new world on the banks of the Saint Lawrence River. The inaugural event of the summer will be a visit by the Tall Ships. The 1984 International Sail Training Races, organized and run by the Sail Training Association (United Kingdom) and the American Sail SEA HISTORY, SPRING 1984

Thoughts on ASTA&#39;s future Adaptedfrom an address delivered to the Annual Sail Training Conference on October 28, 1983.

Training Association, will have training ships from a number of countries assemble at St. Malo on the French coast (the home of Jacques Cartier) . These two, three, and four-masted sailing ships, manned by crews ofup to 350 men, will make for Bermuda via the Canaries, where they will be joined by other ships (primarily from South America) which have raced from San Juan . The Tall Ships will then race to Halifax, Nova Scotia for a rendezvous with smaller American vessels which have competed on a course from Portsmouth , New Hampshire. The fleet will leave Halifax and make for Quebec City, arriving on June 25th after calling in at Gaspe. When the ships and their crews arrive in Quebec City, they will be greeted by crowds of celebrants. The Tall Ships will be moored in the Old Port of Quebec City for five days. The climax of this historic visit, the Parade of Sail by the Tall Ships , will take place on June 30th. Assembling upstream from Quebec City, the ships will sail gracefully past the Old Capital , saluted by hundreds of thousands of spectators. They will then make for the Atlantic, calling at ports along the Saint Lawrence River and the Gulf. Through a unique rating rule, family cru isers and modern ocean racers are able to compete against traditional (often square-rigged) craft. This varied fleet will race in three classes . Owners wishing to join this special event and further the cause of getting young people to sea should be in touch with the ASTA . Persons wishing further information on the Quebec events should write : Quebec 1534-1984, rue Sainte-Anne, Quebec, Q.C. GIR 3X2 , Canada. Tour8ook: Atlantic Provinces and Quebec. pllblished by lhe Canad ian Automob ile Assoc iat ion and the American Auto mobile Assoc iation. 1983 edition , p. 87.

During recent travels of ASTA personnel, we have been concerned with the need for defining and refining the objectives and purposes of ASTA and assigning priorities since it is essential that all of us involved are coordinating our efforts towards a unified ~oal. We submit that ASTA&#39;s primary purpose is the promotion and development of sail training everywhere possible, but primarily in the Americas, and that the primary function or role of ASTA in accomplishing this objective is that of a service organization ministering to the needs of our constituents engaged in sail training, both directly through vessels and programs and indirectly in an ancillary or support role in such vehicles as Sea History, approved port festival s, various maritime museum programs, and the like. How do we do this? Items on the agenda for our 11th Annual Sail Training Conference show a preponderance of subjects directly related to the needs of the sail training activites of our constituents, e.g. regulations under the Sailing School Vessels Act, accreditation under the Act, the story of building and funding a sail training vessel, and so forth. Other items indirectly further the expansion of most important, exposure to the public of sail training-such as the Quebec voyage next summer and the events planned for &#39;86. A new role in ASTA&#39;s service of its constituents has been suggested by Steve Christman of Dana Point. He has been named ASTA Regional Representative for the State of California. This is the result of a bit of collaboration with Steve who proposed to take on this role on an experimental basis for one year in order to publicize sail training and ASTA&#39;s service related activities, to boost constituent and individual membership, to serve as an information center. This prototype post and operation could lead the way for other constituents to represent ASTA on a more formalized basis than currently, thereby providing benefits for both themselves and ASTA . -HENRY H . ANDERSON , JR.