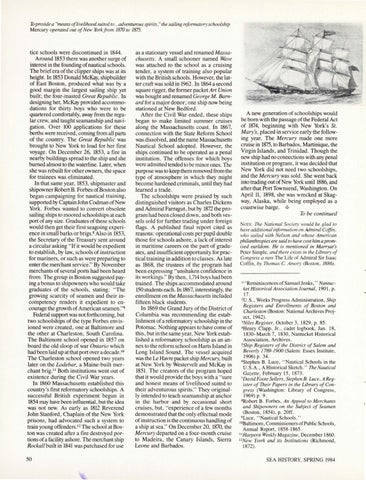 To provide a &quot;means oflivelihood suited to... adventurous spirits,&quot; the sailing reformatory schoolship Mercury operated out of New York from 1870 to 1875.

tice schools were discontinued in 1844. Around 1853 there was another surge of interest in the founding of nautical schools. The brief era of the clipper ships was at its height. In 1853 Donald McKay, shipbuilder of East Boston , produced what was by a good margin the largest sailing ship yet built; the four~masted Great Republic. In designing her, McKay provided accommo. dations for thirty boys who were to be quartered comfortably, away from the regular crew, and taught seamanship and navigation. Over 100 applications for these berths were received, coming from all parts of the country. The Great Republic was brought to New York to load for her first voyage. On December 26, 1853, a fire in nearby buildings spread to the ship and she burned almost to the waterline. Later, when she was rebuilt for other owners, the space for trainees was eliminated . In that same year, 1853, shipmaster and shipowner Robert B. Forbes of Boston also began campaigning for nautical training, supported by Captain John Codman of New York . Forbes wanted to convert obsolete sailing ships to moored schoolships at each port of any size. Graduates of these schools would then get their first seagoing experience in small barks or brigs.8 Also in 1853, the Secretary of the Treasury sent around a circular asking &quot; If it would be expedient to establish, by law, schools of instruction for mariners, or such as were preparing to enter the merchant service.&quot; By November merchants of several ports had been heard from . The group in Boston suggested paying a bonus to shipowners who would take graduates of the schools, stating: &quot;The growing scarcity of seamen and their incompetency renders it expedient to encourage the growth of American seamen .&quot; 9 Federal support was not forthcoming, but two schoolships of the type Forbes envisioned were created, one at Baltimore and the other at Charleston , South Carolina. The Baltimore school opened in 1857 on board the old sloop of war Ontario which had been laid up at that port over a decade.10 The Charleston school opened two years later on the wdebar, a Maine-built merchant brig. 11 Both institutions went out of existence during the Civil War years. In 1860 Massachusetts established this country&#39;s first reformatory schoolships. A successful British experiment begun in 1854 may have been influential, but the idea was not new. As early as 1812 Reverend John Stanford, Chaplain of the New York prisons , had advocated such a system to train young offenders. 12 The school at Boston was created after a fire destroyed portions of a facility ashore. The merchant ship Rock.all built in 1841 was purchased for use 50

as a stationary vessel and renamed Massachusetts. A small schooner named ÂťUve was attached to the school as a cruising tender, a system of training also popular with the British schools. However, the latter craft was sold in 1962 . In 1864 a second square rigger, the former packet Art Union was bought and renamed George M. Barnard for a major donor; one ship now being stationed at New Bedford . After the Civil War ended, these ships began to make limited summer cruises along the Massachusetts coast. In 1867, connection with the State Reform School was dissolved , and the name Massachusetts Nautical School adopted . However, the ships continued to be operated as a penal institution . The offenses for which boys were admitted tended to be minor ones. The purpose was to keep them removed from the type of atmosphere in which they might become hardened criminals, until they had learned a trade. The schoolships were praised by such distinguished visitors as Charles Dickens and Admiral Farragut , but by 1872 the program had been closed down, and both vessels sold for further trading under foreign flags . A published final report cited as rea8ons: operational costs per pupil double those for schools ashore, a lack of interest in maritime careers on the part of graduates, and insufficient opportunity for practical training in addition to classes. As late as 1868, the trustees of the program had been expressing &quot;unshaken confidence in its workings.&quot; By then, 1,714 boys had been trained . The ships accommodated around 150 students each. In 1867, interestingly, the enrollment on the Massa chusetts included fifteen black students. In 1869 the Grand Jury of the District of Columbia was recommending the establishment of a reformatory schoolship in the Potomac. Nothing appears to have come of this, but in the same year, New York established a reformatory schoolship as an annex to the reform school on Harts Island in Long Island Sound. The vessel acquired was the Le Havre packet ship Mercury, built at New York by Westervelt and McKay in 1851. The creators of the program hoped that it would provide the boys with a &quot;sure and honest means of livelihood suited to their adventurous spirits.&quot; They originally intended to teach seamanship at anchor in the harbor and by occasional short cruises, but, &quot;experience of a few months demonstrated that the only effectual mode of instruction is the continuous handling of a ship at sea .&quot; On December 20, 1870, the Mercury departed on a four-month cruise to Madeira, the Canary Islands, Sierra Leone and Barbados.

A new generation of schoolships would be born with the passage of the Federal Act of 1874, beginning with New York&#39;s St. Mary&#39;s , placed in service early the following year. The Mercury made one more cruise in 1875, to Barbados, Martinique, the Virgin Islands, and Trinidad . Though the new ship had no connections with any penal institution or program, it was decided that New York did not need two schoolships, and the Mercury was sold. She went back into trading out of New York until 1886, and after that Port Townsend, Washington. On April 11, 1898, she was wrecked at Skagway, Alaska, while being employed as a coastwise barge. &#39;1&gt; To be continued NarE: Th e National Society would be glad to have additional information on Admiral Coffin, who sailed with Nelson and whose American philanthropies are said to have cost him a promised earldom. He is mentioned in Marryat &#39;s Peter Simple, and there exists in the Library of Congress a rare The Life of Admiral Sir Isaac Coffin, by Th omas C. Amory (Boston, 1886).