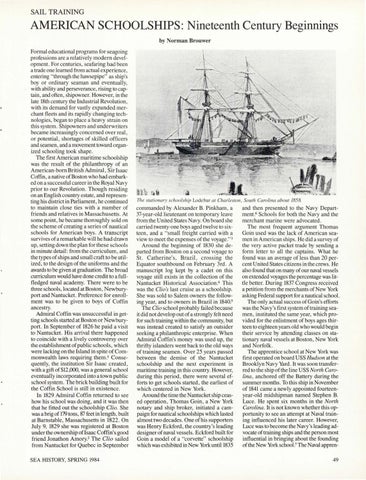 AMERICAN SCHOOLSHIPS: Nineteenth Century Beginnings by Norman Brouwer Formal educational programs for seagoing professions are a relatively modern development. For centuries, seafaring had been a trade one learned from actual experience, entering &quot; through the hawsepipe&quot; as ship&#39;s boy or ordinary seaman and eventually, with ability and perseverance, rising to captain, and often , shipowner. However, in the late 18th century the Industrial Revolution , with its demand for vastly expanded merchant fleets and its rapidly changing technologies, began to place a heavy strain on this system. Shipowners and underwriters became increasingly concerned over real , or potential , shortages of skilled officers and seamen, and a movement toward organized schooling took shape. The first American maritime schoolship was the result of the philanthropy of an American-born British Admiral , Sir Isaac Coffin , a native of Boston who had embarked on a successful career in the Royal Navy prior to our Revolution . Though residing on an English country estate, and representing his district in Parliament, he continued to maintain close ties with a number of friends and relatives in Massachusetts . At some point, he became thoroughly sold on the scheme of creating a series of nautical schools for American boys. A transcript survives of a remarkable will he had drawn up, setting down the plan for these schools in minute detail: from the curriculum , and the types of ships and small craft to be utilized , to the design of the uniforms and the awards to be given at graduation . The broad curriculum would have done credit to a fullfledged naval academy. There were to be three schools, located at Boston , Newburyport and Nantucket. Preference for enrollment was to be given to boys of Coffin ancestry. Admiral Coffin was unsuccessful in getting schools started at Boston or Newburyport. In September of 1826 he paid a visit to Nantucket. His arrival there happened to coincide with a lively controversy over the establishment of public schools, which were lacking on the Island in spite of Commonwealth laws requiring them.1 Consequently, the institution Sir Isaac created , with a gift of $12 ,000, was a general school eventually incorporated into a town public school system . The brick building built for the Coffin School is still in existence. In 1829 Admiral Coffin returned to see how his school was doing, and it was then that he fitted out the schoolship Clio. She was a brig of 179 tons, &#39;if! feet in length, built at Barnstable, Massachusetts in 1822 . On July 9, 1829 she was registered at Boston under the ownership oflsaac Coffin&#39;s good friend Jonathon Amory.2 The Clio sailed from Nantucket for Quebec in September SEA HISTDRY, SPRING 1984

commanded by Alexander B. Pinkham , a 37-year-old lieutenant on temporary leave from the United States Navy. On board she carried twenty-one boys aged twelve to sixteen , and a &quot;small freight carried with a view to meet the expenses of the voyage.&quot; 3 Around the beginning of 1830 she departed from Boston on a second voyage to St. Catherine&#39;s , Brazil , crossing the Equator southbound on February 3rd. A manuscript log kept by a cadet on this voyage still exists in the collection of the Nantucket Historical Association.4 This was the Clio&#39;s last cruise as a schoolship. She was sold to Salem owners the following year, and to owners in Brazil in 1840.5 The Clio school probably failed because it did not develop out of a strongly felt need for such training within the community, but was instead created to satisfy an outsider seeking a philanthropic enterprise. When Admiral Coffin&#39;s money was used up, the thrifty islanders went back to the old ways of training seamen. Over 25 years passed between the demise of the Nantucket schoolship and the next experiment in maritime training in this country. However, during this period, there were several efforts to get schools started , the earliest of which centered in New York. Around the time the Nantucket ship ceased operation, Thomas Goin , a New York notary and ship broker, initiated a campaign for nautical schoolships which lasted almost two decades. One of his supporters was Henry Eckford, the country&#39;s leading designer of naval vessels . Eckford built for Goin a model of a &quot;corvette&quot; schoolship which was exhibited in New York until 1835

and then presented to the Navy Department.6 Schools for both the Navy and the merchant marine were advocated . The most frequent argument Thomas Goin used was the lack of American seamen in American ships. He did a survey of the very active packet trade by sending a form letter to all the captains. What he found was an average of less than 20 percent United States citizens in the crews. He also found that on many of our naval vessels on extended voyages the percentage was little better. During 1837 Congress received a petition from the merchants of New York asking Federal support for a nautical school. The only actual success ofGoin&#39;s efforts was the Navy&#39;s first system of training seamen , instituted the same year, which provided for the enlistment of boys ages thirteen to eighteen years old who would begin their service by attending classes on stationary naval vessels at Boston , New York and Norfolk. The apprentice school at New York was first operated on board USS Hudson at the Brooklyn Navy Yard. It was soon transferred to the ship of the line USS North Carolina, anchored off the Battery during the summer months. To this ship in November of 1841 came a newly appointed fourteenyear-old midshipman named Stephen B. Luce. He spent six months in the North Carolina . It is not known whether this opportunity to see an attempt at Naval training influenced his later career. However, Luce was to become the Navy&#39;s leading advocate of training ships and the person most influential in bringing about the founding of the New York school.7 The Naval appren49