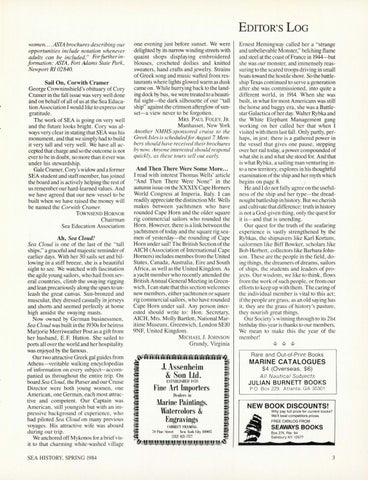 Sail On, Corwith Cramer George Crowninshield&#39;s obituary of Cory Cramer in the fall issue was very well done and on behalf of all of us at the Sea Education Association I would like to ex press our gratitude. The work of SEA is going on very well and the future looks bright . Cory was always very clear in stating that SEA was his monument, and that we simply had to build it very tall and very well . We have all accepted that charge and so the outcome is not ever to be in doubt , no more than it ever was under his stewardship. Gale Cramer, Cory&#39;s widow and a former SEA student and staff member, has joined the board and is actively helping the rest of us remember our hard-learned values. And we have agreed that our new vessel to be built when we have raised the money will be named the Corwith Cramer. TOW NSEND HORNOR

Ah, Sea Cloud! Sea Cloud is one of the last of the &quot; tall ships,&quot; a graceful and maj estic reminder of earlier days . With her 30 sail s set and billowing in a stiff breeze, she is a beautiful sight to see. We watched with fascination the agile young sailors, who hail from several countries, climb the swaying rigging and lean precariously along the spars to unleash the great canvas. Sun-bronzed and muscular, they dressed casually in jerseys and shorts and seemed perfectl y at home high amidst the swaying masts. Now owned by German businessmen, Sea Cloud was built in the 1930s for heiress Marjorie Merriweather Post as a gift from her husband , E.F. Hutton. She sailed to ports all over the world and her hospitality was enjoyed by the famous . Our two attractive Greek gal guides from Athens-veritable walking encyclopedias of information on every subject-accompanied us throughout the entire trip. On board Sea Cloud, the Purser and our Cruise Director were both yo ung women, one American, one German , each most attractive and competent. Our Captain was Ame ri can, still youngish but with an impress ive bac kground of experience, who had piloted Sea Cloud on many prev ious voyages. His attracti ve wife was aboard during our trip. We anchored off Mykonos for a brief visit to that charming white-washed vi ll age SEA HISTORY, SPRING 1984

one evening just before sunset. We were delighted by its narrow winding streets with quaint shops displaying embroidered blouses, crocheted doilies and knitted sweaters, hand crafts and jewelry. Strains of Greek song and music wafted from restaurants where lights glowed warm as dusk came on. While hurrying back to the landing dock by bus, we were treated to a beautiful sight-the dark silhouette of our &quot; tall ship&quot; against the crimson afterglow of sunset-a view never to be forgotten. MRS. PAUL FOLEY, JR.

Manhasset , New York Another NMHS-sponsored cruise to the Greek Isles is scheduled for August 7. Members should have received their brochures by now. Anyone interested should respond quickly, as these tours sell out early.

And Then There Were Some More ... I read with interest Thomas Wells&#39; article &quot;And Then There Were None&quot; in the autumn issue on the XXXIX Cape Homers World Congress at Imperia , Italy. I can readily appreciate the distinction Mr. Wells makes between yachtsmen who have rounded Cape Horn and the older square rig commercial sailors who rounded the Horn. However, there is a link between the yachtsmen of today and the square rig seamen of yesterday-the round ing of Cape Horn under sail! The British Section of the AICH (Association oflnternational Cape Homers) includes membes from the United States, Canada , Australia , Eire and South Africa , as well as the United Kingdom. As a yacht member who recently attended the British Annual General Meeting in Greenwich , I can state that this section welcomes new members, either yachtsmen or square rig commercial sailors, who have rounded Cape Horn under sail. Any person interested should write to: Hon. Secretary, AICH, Mrs. Molly Bartlett, National Maritime Museum , Greenwich , London SElO 9NF, United Kingdom. MICHAEL J. JOH NSON

Ernest Hemingway called her a &quot;strange and unbelievable Monster,&quot; belching fl ame and steel at the coast of France in 1944- but she was our monster, and immensely reassuring to the scared troops dri vi ng in small boats toward the hostile shore. So the battleship Texas continued to serve a generation after she was commissioned , into quite a different world , in 1914. When she was built , in what for most Americans was still the horse and buggy era, she was a Battlestar Galactica of her day. Walter Rybka and the White Elephant Management gang worki ng on her called her that when I visited with them last fall. Only partl y, perhaps , in jest: there is a gathered power in the vessel that g ives one pause, stepping over her rail today, a power compounded of what she is and what she stood for. And that is what Rybka , a sailing man venturing into a new territory, ex plores in his thoughtful examination of the ship and her myth which beg ins on page 8. . He and I do not fully agree on the usefulness of the ship and her type-the dreadnought battleship in history. But we cherish and cultivate that difference: truth in history is not a God-given thing, only the quest for it is-and that is unending. Our quest for the truth of the seafaring experience is vastly strengthened by the Rybkas, the shipsavers like Karl Kortum , sa ilormen like Biff Bowker, scholars like Bob Herbert , collectors like Barbara Johnson. These are the people in the field , doing things, the dreamers of dreams, sailors of ships, the students and leaders of projects. Our wisdom, we like to think , flows from the work of such people, or from our efforts to keep up wi th them. T he caring of the individual member is vital to this act; ifthe people are grass, as an old say ing has it , they are the grass of histo ry&#39;s pasture, they nouri sh great things. Our Society&#39;s winning th ro ugh to its 21st birthday this year is thanks to our members. We mean to make this the year of the member&#39;