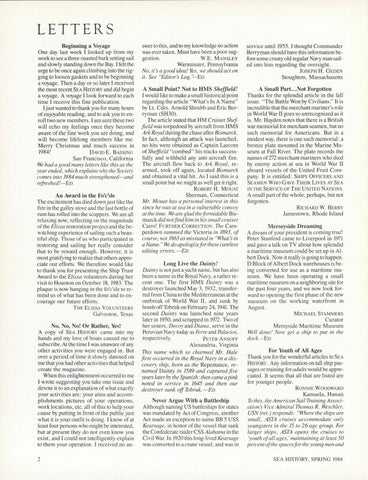 LETTERS Beginning a Voyage One day last week I looked up from my work to see a three-masted bark setting sail and slowly standing down the Bay. I felt the urge to be once again climbing into the rigging to loosen gaskets and to be beginning a voyage. Then a day or so later I received the most recent SEA HISTORY and did begin a voyage. A voyage I look forward to each time I receive this fine publication. I just wanted to thank you for many hours of enjoyable reading, and to ask you to enroll two new members. I am sure these two will echo my feelings once they become aware of the fine work you are doing, and will become lifelong members like me. Merry Christmas and much success in 1984! DAVIDE. BASSING San Francisco, California J# had a good many letters like this as the year ended, which explains why the Society comes into 1984 much strengthened-and refreshed!- ED.

An Award in the Fo&#39;c&#39;sle The excitement has died down just like the fire in the galley stove and the last bottle of rum has rolled into the scuppers. We are all relaxing now, refl ecting on th e magnitude of the Elissa restoration project and the bewitching experience of sailing such a beautiful ship. Those of us who participated in restoring and sailing her really consider that to be reward enough . However, it is most gratifying to realize that others appreciate our efforts. We therefo re would like to thank you for presenting the Ship Trust Award to the Elissa volunteers during her visit to Houston on October 18, 1983. The plaque is now hanging in the fo&#39;c&#39;s le to remind us of what has been done a nd to e ncourage our future efforts. TH E ELISSA VOLUNTEERS Galveston , Texas

No, No, No! Or Rather, Yes! A copy of SEA HISTORY came into my hands and my love of boats caused me to subscribe.At the time I was unaware of any other activities you were engaged in. But over a period of time it slowly dawned on me that you had other activi ties that helped c reate the magazine. When this enlightenment occurred to me I wrote suggesting you take o ne issue and devote it to an explanation of what exactly your activities are: your ai ms and accomplishments pictures of your operations, work locations, etc. all of thi s to help your cause by putting in front of the public just what it is your outfit is doing. I know of at least four persons who might be interested , but at present they do not even know you exist, and I could not intelligently explain to them your operation. I rece ived no an-

A Small Point? Not to HMS Sheffield! I would like to make a small historical point regarding the article &quot; What&#39;s In A Name&quot; by Lt. Cdrs. Arnold Shrubb and Eric Berryman (SH30). The article stated that HM Cruiser Shef field was torpedoed by aircraft from HMS Ark Royal during the chase after Bismarck. In fact, although an attack was launched, no hits were obtained as Captain Larcom of Sheffield &quot;combed&quot; his tracks successfully and withheld any anti-aircraft fire. The aircraft flew back to Ark Royal, rearmed, took off again , located Bismarck and obtained a vital hit. As I said this is a small point but we might as well get it right . ROBERT H . MOUAT Sherman , Connecticut Mr. Mouat has a personal interest in this since he was at sea in a vulnerable convoy at the time. J# are glad the formidable Bismarck did not find him in his small cruiser Cairo! FURTHER CORRECTION : The Camperdown rammed the Victoria in 1893, of course, not 1863 as misstated in &quot;What&#39;s in a Name.&quot; J# do apologize for these careless editing errors. -ED. L&lt;mg Live the Dainty! Dainty is not just a yacht name, but has also been a name in the Royal Navy, a rather recent one. The first HMS Dainty was a destroyer launched May 3, 1932, transferred from China to the Mediterranean at the outbreak of World War II, and su nk by bomb offTobruk on February 24, 1941. The second Dainty was launched nine years later in 1950, and scrapped in 1972 . Two of her sisters , Decoy and Diana , serve in the Peruvian Navy today as Ferre and Palacios, respectively. PETER A SOFF Alexandria , Virginia This name which so charmed Mr. Hale first occurred in the Royal Navy in a discovery ship, born as the Repentance, renamed Dainty in 1589 and captured five years later by the Spanish: then came a pink noted in service in 1645 and then our destroyer sunk off Tobruk. -ED. Never Argue With a Battleship Although naming US battleships for states was mandated by Act of Congress, another Act made an exception to name BB 5 USS Kearsage, in honor of the vessel that sank the Confederate raider CSS Alabama in the Civil War. In 1920 this long-lived Kearsage was converted to a crane vessel , and was in

service until 1955. I thought Commander Berryman should have this information before some crusty old regular Navy man sailed into him regarding the oversight. JOSEPH H . GEDEN Stoughton , Massachusetts

A Small Part ... Not Forgotten Thanks for the splendid article in the fall issue. &quot; The Battle Won by Civilians .&quot; It is incredible that the merchafit mariner&#39;s role in World War II goes so unrecognized as it is. Mr. Hayden notes that there is a British war memorial for merchant seamen, but no such memorial for Americans. But in a modest way, there is one such memorial : a bronze plate mounted in the Marine Museum at Fall River. The plate records the names of272 merchant mariners who died by enemy action at sea in World War II aboard vessels of the United Fruit Company. It is entitled: SHIPS OFFICERS AND SEAMEN WHO GAVE THEIR LIVES AT SEA IN THE SERVICE OF THE U NITED NATIONS. A small part of the whole, perhaps, but not forgotten . RICH ARD W. BERRY Jamestown, Rhode Island

Merseyside Dreaming A dream of your president is coming true! Peter Stanford came to Liverpool in 1971 and gave a talk on TV about how splendid a maritime museum could be set up in Albert Dock. Now it really is going to happen . D Block of Albert Dock warehouses is being converted for use as a maritime museum. We have been operating a small maritime museum on a neighboring site for the past fo ur years, and we now look forward to open ing the first phase of the new museum on the working waterfront in Âˇ August. MICHAEL STAMMERS Curator Mersyside Maritime Museum J#ll done! Now get a ship to put in the dock.-ED.

For Youth of All Ages Thank you for the wonderful articles in SEA HISTORY . Any information on tall ship passages or training for adults would be appreciated . It seems that all that are listed are for younger people. RO NNIE WOODWARD Kamuela , Hawaii To this, the American Sail Training Association&#39;s Vice Admiral Thomas R. J#schler, USN (ret.) responds: &quot;Where the ships are small, ASTA cruises accommodate only youngsters in the 15 to 26 age group. For larger ships, ASTA opens the cruises to &#39;youth of all ages,&#39; maintaining at least 50 percent ofthe spaces for the young men and SEA HISTORY, SPRING 1984