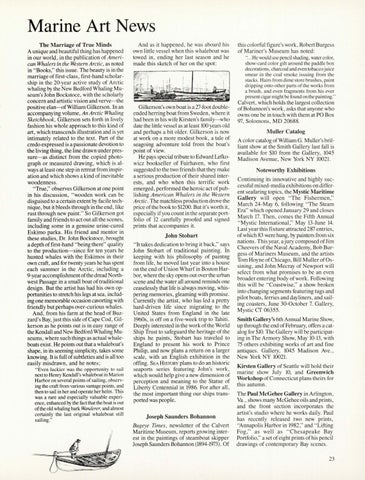 Marine Art News The Marriage of True Minds A unique and beautiful thing has happened in our world , in the publication of American Whalers in the Western Arctic, as noted in &quot;Books,&quot; this issue. The beauty is in the marriage of first-class , first-hand scholarship in the 20-year active study of Arctic whaling by the New Bedford Whaling Museum&#39;s John Bockstoce, with the scholarly concern and artistic vision and verve-the positive elan-ofWilliam Gilkerson. In an accompanying volume, An Arctic Whaling Sketchbook, Gilkerson sets forth in lively fashion his whole approach to this kind of art, which transcends illustration and is yet intimately related to the text. Part of the credo expressed is a passionate devotion to the living thing, the line drawn under pressure-as distinct from the copied photograph or measured drawing, which is always at least one step in retreat from inspiration and which shows a kind of inevitable woodenness. &quot; True,&quot; observes Gilkerson at one point in his discussion, &quot;wooden work can be disguised to a certain extent by facile technique, but it bleeds through in the end , like rust through new paint.&quot; So Gilkerson got family and friends to act out all the scenes, including some in a genuine urine-cured Eskimo parka. His friend and mentor in these studies, Dr. John Bockstoce, brought a depth of first-hand &quot; being there&quot; quality to the production-since for ten years he hunted whales with the Eskimos in their own craft, and for twenty years he has spent each summer in the Arctic, including a 9-year accomplishment of the dread Northwest Passage in a small boat of traditional design . But the artist has had his own opportunities to stretch his legs at sea, including one memorable occasion cavorting with friendly but perhaps over-curious whales. And, from his farm at the head of Buzzard&#39;s Bay, just this side of Cape Cod , Gilkerson as he points out is in easy range of the Kendall and New Bedford Whaling Museums, where such things as actual whaleboats exist. He points out that a whaleboat&#39;s shape, in its seeming simplicity, takes some knowing. It is full of subtleties and is all too easily misdrawn, and he notes ; &quot; Even luckier was the opportunity to sail next to Henry Kendall&#39;s whaleboat in Marion Harbor on several points of sailing, observing the craft from various vantage points, and then to sail in her and operate her helm. This was a rare and especially valuable experience, enhanced by the fact that the boat is out of the old whaling bark Wanderer, and almost certainly the last original whaleboat still sailing.&quot;

And as it happened, he was aboard his own little vessel when this whaleboat was towed in , ending her last season and he made this sketch of her on the spot:

Gilkerson&#39;s own boat is a 27-foot doubleended herring boat from Sweden, where it had been in his wife Kirsten&#39;s family-who date the little vessel as at least 100 years old and perhaps a bit older. Gilkerson is now at work on a more modest book , a tale of seagoing adventure told from the boat&#39;s point of view. He pays special tribute to Edward Lefkowicz bookseller of Fairhaven, who first suggested to the two friends that they make a serious production of their shared interests, and who when this terrific work emerged, performed the heroic act of publishing American Whalers in the Western Arctic. The matchless production drove the price of the book to $1200. But it&#39;s worth it , especially if you count in the separate portfolio of 12 carefully proofed and signed prints that accompanies it. John Stobart &quot; It takes dedication to bring it back ,&#39;&#39; says John Stobart of traditional painting . In keeping with his philosophy of paining from life, he moved last year into a house on the end of Union Wharf in Boston Harbor, where the sky opens out over the urban scene and the water all around reminds one ceaselessly that life is always moving, whispering memories, gleaming with promise. Currently the artist, who has led a pretty hard-driven life since migrating to the United States from England in the late 1960s, is off on a five-week trip to Tahiti. Deeply interested in the work of the World Ship Trust to safeguard the heritage of the ships he paints, Stobart has traveled to England to present his work to Prince Philip, and now plans a return on a larger scale, with an English exhibition in the offing. SEA HisroRY plans to do an historic seaports series featuring John&#39;s work, which would help give a new dimension of perception and meaning to the Statue of Liberty Centennial in 1986. For after all, the most important thing our ships transported was people. Joseph Saunders Bohannon Bugeye Times , newsletter of the Calvert Maritime Museum , reports growing interest in the paintings of steamboat skipper Joseph Saunders Bohannon (1894-1973). Of

this colorful figure&#39;s work , Robert Burgess of Mariner&#39;s Museum has noted: &quot;... He would use pencil shading, water color, show-card color gilt around the paddle box decorations, charcoal and even tobacco juice smear in the coal smoke issuing from the stacks. Hairs from dime store brushes, paint dripping onto other parts of the works from a brush , and even fragments from his ever present cigar might be found on the painting.&#39;&#39; Calvert, which holds the largest collection ofBohannon&#39;s work, asks that anyone who owns one be in touch with them at PO Box &lt;J?, Solomons, MD 20688. Muller Catalog A color catalog of William G. Muller&#39;s brilliant show at the Smith Gallery last fall is available for $10 from the Gallery, 1045 Madison Avenue, New York NY 10021. Noteworthy Exhibitions Continuing its innovative and highly successful mixed-media exhibitions on different seafaring topics, the Mystic Maritime Gallery will open &quot; The Fishermen,&quot; March 24-May 6, following &quot; The Steam Era&quot; which opened January 29 and closes March 17. Then , comes the Fifth Annual &quot; Mystic International ,&quot; May 13-June 14. Last year this fixture attracted 287 entries, of which 83 were hung, by painters from six nations. This year, a jury composed ofJim Cheevers of the Naval Academy, Bob Burgess of Mariners Museum , and the artists Tom Hoyne of Chicago, Bill Muller of Ossining, and John Mecray of Newport will select from what promises to be an even broader entering body of work. Following this will be &quot;Coastwise,&quot; a show broken into changing segments featuring tugs and pilot boats, ferries and day liners, and sailing coasters, June 30-0ctober 7. Gallery, Mystic CT 06355. Smith Gallery&#39;s 6th Annual Marine Show, up through the end of February, offers a catalog for $10. The Gallery will be participating in The Armory Show, May 10-13, with 75 others exhibiting works of art and fine antiques. Gallery, 1045 Madison Ave. , New York NY 10021. Kirsten Gallery of Seattle will hold their marine show July 10, and Greenwich Workshop of Connecticut plans theirs for this autumn. The Paul McGehee Gallery in Arlington , Va ., shows many McGehee oils and prints, and the front section incorporates the artist&#39;s studio where he works daily. Paul has recently released two new prints, &quot;Annapolis Harbor in 1982,&quot; and &quot;Lifting Fog ,&quot; as well as &quot;C hesa peake Bay Portfolio,&quot; a set of eight prints of his pencil drawings of contemporary Bay scenes. 23