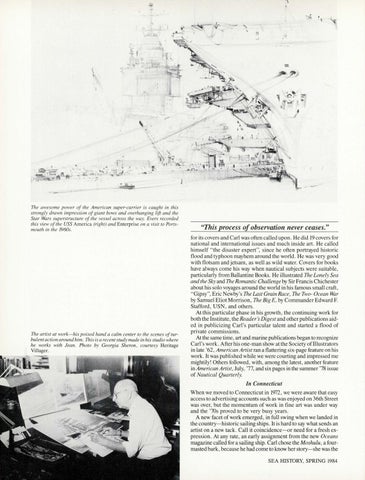 Th e awesome power of the American super-carrier is caught in this strongly drawn impression of giant bows and overhanging lift and the Star Wars superstructure of the vessel across the way. Evers recorded this view of th e USS America (righ t) and Enterprise on a visit to Portsmouth in the 1960s.

&quot;This process of observation never ceases.&quot; for its covers and Carl was often called upon . He did 19 covers for national and international issues and much inside art. He called himself &quot; the disaster expert&#39;&#39;, since he often portrayed historic flood and typhoon mayhem around the world . He was very good with flotsam and jetsam, as well as wild water. Covers for books have always come his way when nautical subjects were suitable, particularly from Ballantine Books . He illustrated The Lonely Sea and the Sky and The Romantic Challenge by Sir Francis Chichester about his solo voyages around the world in his famous small craft , &quot;Gipsy&quot;, Eric Newby&#39;s The wst Grain Race, The Two- Ocean War by Samuel Eliot Morrison , The Big E, by Commander Edward F. Stafford , USN, and others. At this particular phase in his growth, the continuing work for both the Institute, the Reader&#39;s Digest and other publications aided in publicizing Carl&#39;s particular talent and started a fl ood of private commissions. At the same time, art aI)d marine publications began to recognize Carl&#39;s work. After his one-man show at the Society of Illustrators in late &#39;62 , American Artist ran a flattering six-page feature on his work . It was published while we were courting and impressed me mightil y! Others followed, with, among the latest, another feature in American Artist, July, &#39;77, and six pages in the summer &#39;78 issue of Nautical Quarterly.

In Connecticut When we moved to Connecticut in 1972 , we were aware that easy access to advertising accounts such as was enjoyed on 36th Street was over, but the momentum of work in fine art was under way and the &#39;70s proved to be very busy years. A new facet of work emerged, in full swing when we landed in the country-historic sailing ships . It is hard to say what sends an artist on a new tack. Call it coincidence-or need for a fresh expression . At any rate, an early assignment from the new Oceans magazine called for a sailing ship. Carl chose the Moshulu , a fourmasted bark , because he had come to know her story-she was the SEA HISlDRY, SPRING 1984