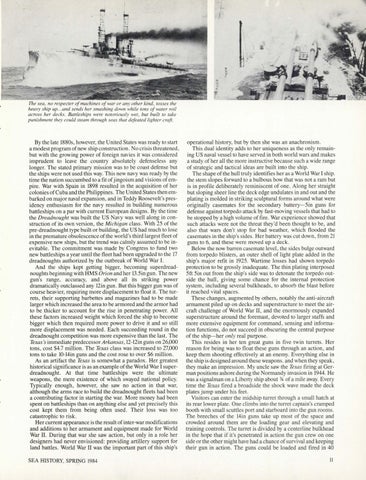 The sea, no respecter of machines of war or any other kind, tosses the heavy ship up... and sends her smashing down while tons of water roil across her decks. Bauleships were notoriously wet, but built to take punishment they could steam through seas that defeated lighter craft.

By the late 1880s, however, the United States was ready to start a modest program ofnew ship construction. No crisis threatened , but with the growing power of foreign navies it was considered imprudent to leave the country absolutely defenseless any longer. The stated primary mission was to be coast defense but the ships were not used this way. This new navy was ready by the time the nation succumbed to a fit of jingoism and visions of empire. War with Spain in 1898 resulted in the acquisition of her colonies of Cuba and the Philippines. The United States then embarked on major naval expansion, and in Teddy Roosevelt&#39;s presidency enthusiasm for the navy resulted in building numerous battleships on a par with current European designs. By the time the Dreadnought was built the US Navy was well along in construction of its own version, the Michigan class. With 25 of the pre-dreadnought type built or building, the US had much to lose in the premature obsolescence of the world&#39;s third largest fleet of expensive new ships, but the trend was calmly assumed to be inevitable. The commitment was made by Congress to fund two new battleships a year until the fleet had been upgraded to the 17 dreadnoughts authorized by the outbreak of World War I. And the ships kept getting bigger, becoming superdreadnoughts beginning with HMS Orion and her 13.5in gun. The new gun&#39;s range, accuracy, and above all its striking power dramatically outclassed any 12in gun. But this bigger gun was of course heavier, requiring more displacement to float it. The turrets, their supporting barbettes and magazines had to be made larger which increased the area to be armored and the armor had to be thicker to account for the rise in penetrating power. All these factors increased weight which forced the ship to become bigger which then required more power to drive it and so still more displacement was needed. Each succeeding round in the dreadnought competition was more expensive than the last. The Texas&#39;s immediate predecessor Arkansas, 12-12in guns on 26,000 tons, cost $4.7 million . The Texas class was increased to 27,000 tons to take 10-14in guns and the cost rose to over $6 million. As an artifact the Texas is somewhat a paradox . Her greatest historical significance is as an example of the World War I superdreadnought. At that time battleships were the ultimate weapons, the mere existence of which swayed national policy. Typically enough, however, she saw no action in that war, although the arms race to build the dreadnought fleets had been a contributing factor in starting the war. More money had been spent on battleships than on anything else and yet precisely this cost kept them from being often used . Their loss was too catastrophic to risk. Her current appearance is the result of inter-war modifications and additions to her armament and equipment made for World War II. During that war she saw action, but only in a role her designers had never envisioned: providing artillery support for land battles. World War II was the important part of this ship&#39;s SEA HISTORY, SPRING 1984

operational history, but by then she was an anachronism. This dual identity adds to her uniqueness as the only remaining US naval vessel to have served in both world wars and makes a study of her all the more instructive because such a wide range of strategic and tactical ideas are built into the ship. The shape of the hull truly identifies her as a World War I ship. the stem slopes forward to a bulbous bow that was not a ram but is in profile deliberately reminiscent of one. Along her straight but sloping sheer line the deck edge undulates in and out and the plating is molded in striking sculptural forms around what were originally casemates for the secondary battery-Sin guns for defense against torpedo attack by fast-moving vessels that had to be stopped by a high volume of fire. War experience showed that such attacks were not the threat they&#39;d been thought to be, and also that wars don&#39;t stop for bad weather, which flooded the casemates in the ship&#39;s sides. Her battery was cut down, from 21 guns to 6, and these were moved up a deck. Below the now barren casemate level , the sides bulge outward from torpedo blisters, an outer shell of light plate added in the ship&#39;s major refit in 1925. Wartime losses had shown torpedo protection to be grossly inadequate. The thin plating interposed 5ft 5in out from the ship&#39;s side was to detonate the torpedo outside the hull , giving some chance for the internal protection system, including several bulkheads, to absorb the blast before it reached vital spaces. These changes, augmented by others, notably the anti-aircraft armament piled up on decks and superstructure to meet the aircraft challenge of World War II, and the enormously expanded superstructure around the foremast, devoted to larger staffs and more extensive equipment for command, sensing and information functions, do not succeed in obscuring the central purpose of the ship-her only real purpose. This resides in her ten great guns in five twin turrets. Her reason for being was to float these guns through an action, and keep them shooting effectively at an enemy. Everything else in the ship is designed around these weapons. and when they speak, they make an impression. My uncle saw the Texas firing at German positions ashore during the Normandy invasion in 1944. He was a signalman on a Liberty ship about % of a mile away. Every time the Texas fired a broadside the shock wave made the deck plates jump under his feet. Visitors can enter the midship turret through a small hatch at its rear lower plate. One climbs into the turret captain&#39;s cramped booth with small scuttles port and starboard into the gun rooms. The breeches of the 14in guns take up most of the space and crowded around them are the loading gear and elevating and training controls. The turret is divided by a centerline bulkhead in the hope that if it&#39;s penetrated in action the gun crew on one side or the other might have had a chance of survival and keeping their gun in action . The guns could be loaded and fired in 40 11