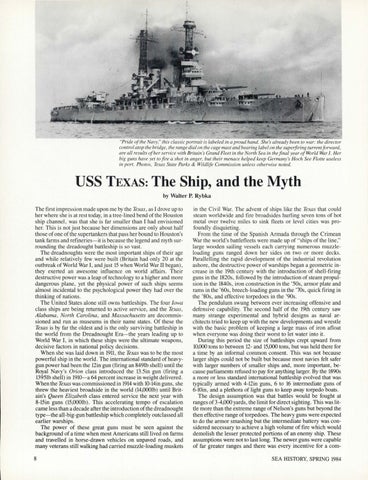 &quot;Pride of the Navy,&quot; this classic portrait is labeled in a proud hand. Sh e&#39;s already been to war: the director control atop the bridge, the range dial on the cage mast and bearing label on the superfiring turrent forward , are all results of her service with Britain &#39;s Grand Fleet in the North Sea in the final year of World War/. Her big guns have yet to fire a shot in anger, but their menace helped keep Germany &#39;s Hoch See Flotte useless in port. Photos , Texas State Parks &amp; Wildlife Commission unless otherwise noted.

USS TEXAS: The Ship, and the Myth by Walter P. Rybka The first impression made upon me by the Texas, as I drove up to her where she is at rest today, in a tree-lined bend of the Houston ship channel , was that she is far smaller than I had envisioned her. This is not just because her dimensions are only about half those of one of the supertankers that pass her bound to Houston&#39;s tank farms and refineries-it is because the legend and myth surrounding the dreadought battleship is so vast. The dreadnoughts were the most important ships of their age and while relatively few were built (Britain had only 20 at the outbreak of World War I, and just 15 when World War II began) , they exerted an awesome influence on world affairs. Their destructive power was a leap of technology to a higher and more dangerous plane, yet the physical power of such ships seems almost incidental to the psychological power they had over the thinking of nations. The United States alone still owns battleships. The four Iowa class ships are being returned to active service, and the Texas , Alabama, North Carolina , and Massachusetts are decommissioned and run as museums in their name states. Of these the Texas is by far the oldest and is the only surviving battleship in the world from the Dreadnought Era-the years leading up to World War I, in which these ships were the ultimate weapons, decisive factors in national policy decisions. When she was laid down in 1911 , the Texas was to be the most powerful ship in the world. The international standard of heavygun power had been the 12in gun (firing an 849lb shell) until the Royal Navy&#39;s Orion class introduced the 13.5in gun (firing a 1395lb shell) in 1910-a 64 percent increase in weight delivered. When the Texas was commissioned in 1914 with 10-14in guns , she threw the heaviest broadside in the world (14,000lb) until Britain&#39;s Queen Elizabeth class entered service the next year with 8-15in guns (15,000lb). This accelerating tempo of escalation came Jess than a decade after the introduction of the dreadnought type-the all-big-gun battleship which completely outclassed all earlier warships. The power of these great guns must be seen against the background of a time when most Americans still lived on farms and travelled in horse-drawn vehicles on unpaved roads, and many veterans still walking had carried muzzle-loading muskets 8

in the Civil War. The advent of ships like the Texas that could steam worldwide and fire broadsides hurling seven tons of hot metal over twelv.:: miles to sink fleets or level cities was profoundly disquieting . From the time of the Spanish Armada through the Crimean War the world&#39;s battlefleets were made up of &quot;ships of the line,&quot; large wooden sailing vessels each carrying numerous muzzleloading guns ranged down her sides on two or more decks. Parallelling the rapid development of the industrial revolution ashore, the destructive power of warships began a geometric increase in the 19th century with the introduction of shell-firing guns in the 1820s, followed by the introduction of steam propulsion in the 1840s, iron construction in the &#39;50s, armor plate and rams in the &#39;60s, breech-loading guns in the &#39;70s , quick firing in the &#39; 80s, and effective torpedoes in the &#39;90s. The pendulum swung between ever increasing offensive and defensive capability. The second half of the 19th century saw many strange experimental and hybrid designs as naval architects tried to keep up with the new developments and wrestle with the basic problem of keeping a large mass of iron afloat when everyone was doing their worst to let water into it. During this period the size of battleships crept upward from 10,000 tons to between 12- and 15,000 tons, but was held there for a time by an informal common consent. This was not because larger ships could not be built but because most navies felt safer with larger numbers of smaller ships and, more important, because parliaments refused to pay for anything larger. By the 1890s a more or less standard international battleship evolved that was typically armed with 4-12in guns, 6 to 16 intermediate guns of 6-IOin , and a plethora of light guns to keep away torpedo boats. The design assumption was that battles would be fought at ranges of3-4,000 yards, the limit for direct sighting . This was little more than the extreme range of Nelson&#39;s guns but beyond the then effective range of torpedoes. The heavy guns were expected to do the armor smashing but the intermediate battery was considered necessary to achieve a high volume of fire which would demolish the lesser protected portions of an enemy ship. These assumptions were not to last long. The newer guns were capable of far greater ranges and there was every incentive for a comSEA HISTORY, SPRING 1984