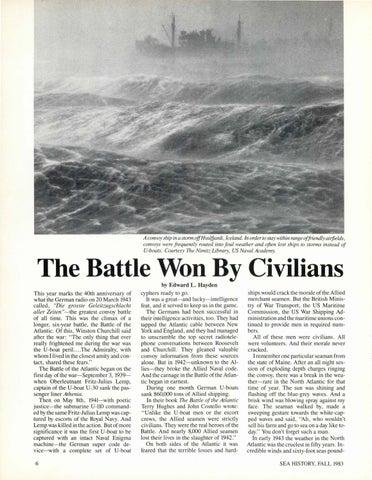 A convoy ship in a storm offHvaljjardi, Iceland. In order to stay within range offriendly airfields, convoys were frequently routed into fou l weather and often lost ships to storms instead of U-boats. Courtesy The Nimitz Library, US Naval Academy.

The Battle Won By Civilians This year marks the 40th anniversary of what the German radio on 20 March 1943 called, &quot;Die grosste Geleitzugschlacht aller Zeiten &quot;- the greatest convoy battle of all time. This was the climax of a longer, six-year battle, the Battle of the Atlantic. Of this, Winston Churchill said after the war: &quot;The only thing that ever really frightened me during the war was the U-boat peril. ...The Admiralty, with whom I Ii ved in the closest amity and contact, shared these fears.&quot; The Battle of the Atlantic began on the first day of the war-September 3, 1939when Oberleutnant Fritz-Julius Lemp, captain of the U-boat U-30 sank the passenger liner Athenia. Then on May 8th , 1941-with poetic justice- the submarine U-110 commanded by the same Fritz-Julius Lemp was captured by escorts of the Royal Navy. And Lemp was killed in the action. But of more significance it was the first U-boat to be captured with an intact Naval Enigma machine- the German super code device- with a complete set of U-boat 6

by Edward L. Hayden cyphers ready to go. It was a great-and lucky-intelligence feat , and it served to keep us in the game. The Germans had been successful in their intelligence activities , too. They had tapped the Atlantic cable between New York and England , and they had managed to unscramble the top secret radiotelephone conversations between Roosevelt and Churchill. They gleaned valuable convoy information from these sources alone. But in 1942-unknown to the Allies-they broke the Allied Naval code. And the carnage in the Battle of the Atlantic began in earnest. During one month German U-boats sank 860,000 tons of Allied shipping . In their book The Battle of the Atlantic Terry Hughes and John Costello wrote: &quot;Unlike the U-boat men or the escort crews, the Allied seamen were strictly civilians. They were the real heroes of the Battle. And nearly 8,000 Allied seamen lost their lives in the slaughter of 1942.&quot; On both sides of the Atlantic it was feared that the terrible losses and hard-

ships would crack the morale of the Allied merchant seamen. But the British Ministry of War Transport, the US Maritime Commission , the US War Shipping Administration and the maritime unions continued to provide men in required numbers. All of these men were civilians. All were volunteers. And their morale never cracked . I remember one particular seaman from the state of Mai ne. After an all night session of exploding depth charges ringing the convoy, there was a break in the weather-rare in the North Atlantic for that time of year. The sun was shining and flashing off the blue-grey waves. And a brisk wind was blowing spray agai nst my face . The seaman walked by, made a sweeping gesture towards the white-capped waves and said , &#39;&#39;Ah, who wouldn&#39;t sell his farm and go to sea on a day like today.&quot; You don&#39;t forget such a man. In early 1943 the weather in the North Atlantic was the cruelest in fifty yea rs. Incredible winds and sixty-foot seas poundSEA HISTORY, FALL 1983