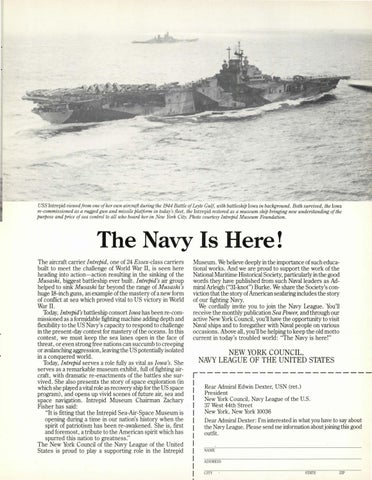 USS Intrepid viewed from one of her own aircraft during the 1944 Battle ofLeyte Gulf, with battleship Iowa in background. Both survived, the Iowa re-commissioned as a rugged gun and missile platform in today&#39;s fleet, the Intrepid restored as a museum ship bringing new understanding of the purpose and price of sea control to all who board her in New York City. Photo courtesy Intrepid Museum Foundation.

The Navy Is Here! The aircraft carrier Intrepid, one of 24 Essex-class carriers built to meet the challenge of World War II, is seen here heading into action-action resulting in the sinking of the Musashi, biggest battleship ever built. lntrepid&#39;s air group helped to sink Musashi far beyond the range of Musashi &#39;s huge 18-inch guns, an example of the mastery of a new form of conflict at sea which proved vital to US victory in World War II. Today, lntrepid&#39;s battleship consort Iowa has been re-commissioned as a formidable fighting machine adding depth and flexibility to the US Navy&#39;s capacity to respond to challenge in the present-day contest for mastery of the oceans. In this contest, we must keep the sea lanes open in the face of threat, or even strong free nations can succumb to creeping or avalanching aggression, leaving the US potentially isolated in a conquered world. Today, Intrepid serves a role fully as vital as Iowa&#39;s. She serves as a remarkable museum exhibit, full of fighting aircraft, with dramatic re-enactments of the battles she survived. She also presents the story of space exploration (in which she played a vital role as recovery ship for the US space program) , and opens up vivid scenes of future air, sea and space navigation. Intrepid Museum Chairman Zachary Fisher has said: &quot;It is fitting that the Intrepid Sea-Air-Space Museum is opening during a time in our nation&#39;s history when the spirit of patriotism has been re-awakened. She is, first and foremost, a tribute to the American spirit which has spurred this nation to greatness.&quot; The New York Council of the Navy League of the United States is proud to play a supporting role in the Intrepid

Museum. We believe deeply in the importance of such educational works. And we are proud to support the work of the National Maritime Historical Society, particularly in the good words they have published from such Naval leaders as Admiral Arleigh (&quot;31-knot&quot;) Burke. We share the Society&#39;s conviction that the story of American seafaring includes the story of our fighting Navy. We cordially invite you to join the Navy League. You&#39;ll receive the monthly publication Sea Power, and through our active New York Council, you&#39;ll have the opportunity to visit Naval ships and to foregather with Naval people on various occasions. Above all, you&#39;ll be helping to keep the old motto current in today&#39;s troubled world: &quot;The Navy is here!&quot;