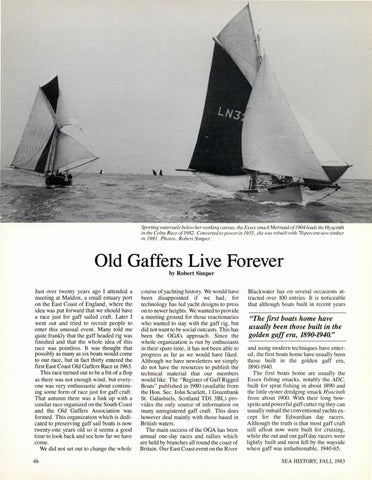 Sporting watersails below her working canvas, the Essex smack Mermaid of1904 leads the Hyacinth in the Colne Race of 1982. Converted 10 power in 1935, she was rebuilt wi1h 70 p ercent new timber in 1981 . Pho1os , Robert Simper.

Old Gaffers Live Forever by Robert Simper Just over twenty years ago I attended a meeting at Maldon, a small estuary port on the East Coast of England, where the idea was put forward that we should have a race just for gaff sailed craft. Later I went out and tried to recruit people to enter this unusual event . Many told me quite frankly that the gaff headed rig was fi nished and that the whole idea of this race was pointless. It was thought that possibly as many as six boats would come to our race, but in fact thirty entered the first East Coast Old Gaffers Race in 1963. This race turned out to be a bit of a flop as there was not enough wind , but everyone was very enthusiastic about continuing some form of race just for gaff craft . That autumn there was a link up with a similar race organized on the South Coast and the Old Gaffers Association was formed. This organization which is dedicated to preserving gaff sail boats is now twenty-one years old so it seems a good time to look back and see how far we have come. We did not set out to change the whole

course of yachting history. We would have been disappointed if we had , for technology has led yacht designs to press on to newer heights. We wanted to provide a meeting ground for those reactionaries who wanted to stay with the gaff rig, but did not want to be social outcasts. This has been the OGA's approach . Since the whole organization is run by enthusiasts in their spare time, it has not been able to progress as far as we would have liked . Although we have newsletters we simply do not have the resources to publish the technical material that our members would like. The " Register of Gaff Rigged Boats" published in 1980 (available from the Hon . Sec. John Scarlett, 1 Greenbank St. Galashiels, Scotland TD! 3BL) provides the only source of information on many unregistered gaff craft . This does however deal mainly with those based in British waters . The main success of the OGA has been annual one-day races and rallies which are held by branches all round the coast of Britain. Our East Coast event on the River

Blackwater has on several occasions attracted over 100 entries . It is noticeable that although boats built in recent years