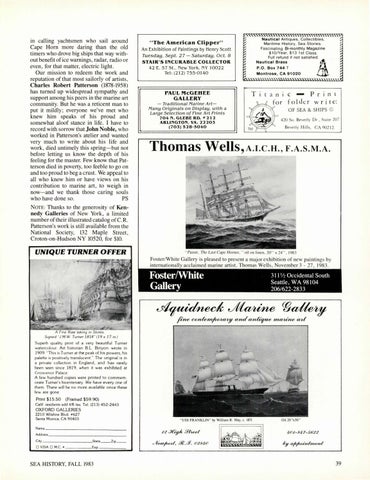 in calling yachtsmen who sail around Cape Horn more daring than the old timers who drove big ships that way without benefit of ice warnings , radar, radio or even, for that matter, electric light. Our mission to redeem the work and reputation of that most sailorly of artists, Charles Robert Patterson (1878-1958) has turned up widespread sympathy and support among his peers in the marine art community. But he was a reticent man to put it mildly ; everyone we've met who knew him speaks of his proud and somewhat aloof stance in life. I have to record with sorrow that John Noble, who worked in Patterson's atelier and wanted very much to write about hi s life and work, died untimely this spring-but not before letting us know the depth of his feeling for the master. Few know that Patterson died in poverty, too feeb le to go on and too proud to beg a crust. We appeal to all who knew him or have views on his contribution to marine art, to weigh in now-and we thank those caring souls who have done so. PS