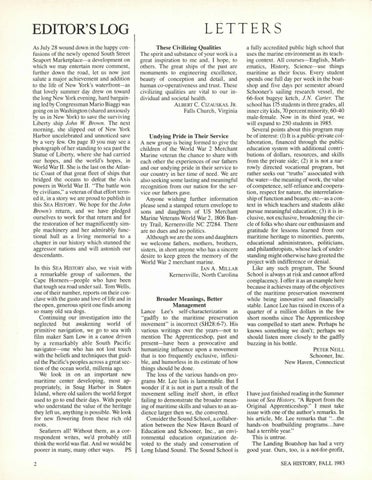 EDIIDR&#39;SLOG As July 28 wound down in the happy confusions of the newly opened South Street Seaport Marketplace-a development on which we may entertain more comment, further down the road, let us now just salute a major achievement and addition to the life of New York&#39;s waterfront-as that lovely summer day drew on toward the long New York evening, hard bargaining led by Congressman Mario Biaggi was going on in Washington (shared anxiously by us in New York) to save the surviving Liberty ship John W Brown. The next morning, she slipped out of New York Harbor uncelebrated and unnoticed save by a very few. On page 10 you may see a photograph of her standing to sea past the Statue of Liberty, where she had carried our hopes, and the world&#39;s hopes , in World War II . She is the last on the Atlantic Coast of that great fleet of ships that bridged the oceans to defeat the Axis powers in World War II. &quot;The battle won by civilians,&quot; a veteran of that effort termed it, in a story we are proud to publish in this SEA HrsroRY. We hope for the John Brown &#39;s return , and we have pledged ourselves to work for that return and for the restoration of her magnificently simple machinery and her admirably functional hull as a living memorial to a chapter in our history which stunned the aggressor nations and will astonish our descendants. In this SEA HrsmRY also, we visit with a remarkable group of sailormen , the Cape Homers-people who have been that tough sea road under sail . Tom Wells, one of their number, reports on their conclave with the gusto and love of life and in the open, generous spirit one finds among so many old sea dogs. Continuing our investigation into the neglected but awakening world of primitive navigation , we go to sea with film maker Sam Low in a canoe driven by a remarkably able South Pacific navigator-one who has not lost touch with the beliefs and techniques that guided the Pacific&#39;s peoples across a great section of the ocean world , millenia ago. We look in on an important new maritime center developing , most appropriately, in Snug Harbor in Staten Island, where old sailors the world forgot used to go to end their days. With people who understand the value of the heritage they left us, anything is possible. We look for new flowering from these rich old roots. Seafarers all! Without them , as a correspondent writes, we&#39;d probably still think the world was flat. And we would be PS poorer in many, many other ways. 2

LETTERS These Civilizing Qualities The spirit and substance of your work is a great inspiration to me and , I hope, to others . The great ships of the past are monuments to engineering excellence, beauty of conception and detail, and human co-operativeness and trust. These civilizing qualities are vital to our individual and societal health. ALBERT C. CIZAUSKAS, JR. Falls Church , Virginia

Undying Pride in Their Service A new group is being formed to give the children of the World War 2 Merchant Marine veteran the chance to share with each other the experiences of our fathers and our undying pride in their service to our country in her time of need . We are also seeking some lasting and meaningful recognition from our nation for the service our fathers gave. Anyone wishing further information please send a stamped return envelope to sons and daughters of US Merchant Marine Veterans World War 2 , 1806 Bantry Trail , Kernersv ille NC 27284. There are no dues and no politics. Although we are the sons and daughters we welcome fathers , mothers , brothers , sisters, in short anyone who has a sincere desire to keep green the memory of the World War 2 merchant marine. IAN A. MILLAR Kernersville, North Carolina

Broader Meanings, Better Management Lance Lee&#39;s self-characterization as &quot;gadfly to the maritime preservation movement&quot; is incorrect (SH28:6-7). His various writings over the years-not to mention The Apprenticeshop, past and present-have been a provocative and humanizing influence upon a movement that is too frequently exclusive, inflexible, and humorless in its estimate of how things should be done. The loss of the various hands-on programs Mr. Lee lists is lamentable. But I wonder if it is not in part a result of the movement selling itself short, in effect failing to demonstrate the broader meaning of maritime skills and values to an audience larger then we, the converted. Consider the Sound School, a collaboration between the New Haven Board of Education and Schooner, Inc. , an environmental education organization devoted to the study and conservation of Long Island Sound. The Sound School is

a fully accredited public high school that uses the marine environment as its teaching context. All courses-English, Mathematics, History, Science-use things maritime as their focus. Every student spends one full day per week in the boatshop and five days per semester aboard Schooner&#39;s sailing research vessel, the 66-foot bugeye ketch, J.N. Carter. The school has 175 students in three grades, all inner city kids, 70 percent minority, 60-40 male-female. Now in its third year, we will expand to 250 students in 1985. Several points about this program may be of interest: (1) It is a public-private collaboration , financed through the public education system with additional contributions of dollars, resources, and skills from the private side; (2) it is not a narrowly directed vocational program , but rather seeks out &quot; truths&quot; associated with the water-the meaning of work, the value of competence, self-reliance and cooperation , respect for nature, the interrelationship of function and beauty, etc:--as a context in which teachers and students alike pursue meaningful education; (3) it is inclusive, not exclusive, broadening the circle of folks who share our enthusiasm and gratitude for lessons learned from our maritime heritage to minorities, parents, educational administrators, politicians, and philanthropists, whose lack of understanding might otherwise have greeted the project with indifference or denial. Like any such program , The Sound School is always at risk and cannot afford complacency. I offer it as an example here because it achieves many of the objectives of the maritime preservation movement while being innovative and financially stable. Lance Lee has raised in excess of a quarter of a million dollars in the few short months since The Apprenticeshop was compelled to start anew. Perhaps he knows something we don&#39;t; perhaps we should listen more closely to the gadfly buzzing in his bottle. PETER NEILL Schooner, Inc. New Haven , Connecticut

I have just finished reading in the Summer issue of Sea History, &quot;A Report from the Original Apprenticeshop.&quot; I must take issue with one of the author&#39;s remarks. In his article, Mr. Lee remarks that &quot; ... the hands-on boatbuilding programs .. . have had a terrible year.&quot; This is untrue. The Landing Boatshop has had a very good year. Ours, too, is a not-for-profit, SEA HISIDRY, FALL 1983