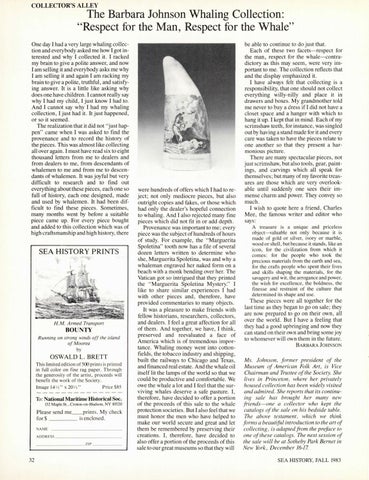 The Barbara Johnson Whaling Collection: "Respect for the Man, Respect for the Whale" One day I had a very large whaling collection and everybody asked me how I got interested and why I collected it. I racked my brain to give a polite answer, and now I am selling it and everybody asks me why I am selling it and again I am racking my brain to give a polite, truthful , and satisfying answer. It is a little like as king why does one have children. I cannot really say why I had my child , I just know I had to. And I cannot say why I had my whal ing collection, I j ust had it. It just happened , or so it seemed . The realization that it did not "just happen" came when I was as ked to find the provenance and to record the history of the pieces . This was almost like collecting all over again . I must have read six to eight thousand letters from me to dealers and from dealers to me, from descendants of whalemen to me and from me to descendants of whalemen. It was joyful but ve ry difficult to research and to fi nd out everything about these pieces , each one so full of history, each one designed , made and used by whalemen. It had been difficult to find these pieces . Sometimes, many months went by before a suitable piece came up. For every piece bought and added to this collection which was of high craftsmanship and high history, there

BOUNTY Running on strong winds off the island ofMoorea by

were hundreds of offers which I had to reject; not only mediocre pieces, but also outright copies and fa kes, or those which had only the dealer's hopeful connection to whaling. And I also rejected many fine pieces which did not fit in or add depth . Provenance was important to me; every piece was the subject of hundreds of hours of study. For example, the " Marguerita Spoletina" tooth now has a file of several dozen letters written to determine who she, Marguerita Spoletina , was and why a whaleman engraved her naked fo rm on a beach with a monk bending over her. The Vatican got so intrigued that they printed the " Margueri ta Spoletina Mystery." I like to share similar experiences I had with other pieces and , therefore, have provided commentaries to many objects. It was a pleasure to make friends with fellow historians, researchers, collectors, and dealers. I feel a great affection fo r all of them . And together, we have, I think, preserved and reevaluated a face of America which is of tremendous imp0rtance. Whaling money went into cottonfields, the tobacco industry and shippi ng, built the railways to Chicago and Texas, and financed real estate. And the whale oil itself lit the lamps of the wo rld so that we could be producti ve and comfo rtable. We owe the whale a lot and I feel that the surviving whales deserve a safe pasture. I, therefore, have decided to offer a portion of the proceeds of this sale to the whale protection societies. But I also feel that we must honor the men who have helped to make our world secure and great and let them be remembered by preserving their creations. I , therefore, have decided to also offer a portion of the proceeds of this sale to our great museums so that they will

be able to continue to do just that. Each of these two facets- respect fo r the man , respect fo r the whale-contradictory as this may seem, were ve ry important to me. The collection reflects that and the display emphasized it. I have always felt that collecting is a responsibility, that one should not collect everything willy- nill y and place it in drawers and boxes. My grandmother told me never to buy a dress if I did not have a closet space and a hanger with which to hang it up. I kept that in mind . Each of my scrimshaw teeth , for instance, was singled out by havi ng a stand made fo r it and every care was ta ken to have the pieces relate to one another so that they present a harmonious picture. There are many spectacul ar pieces , not just scrimshaw, but also tools, gear, paintings, and carvings which all speak fo r themselves; but many of my favo rite treasures are those which are very overlookable until suddenly one sees their immense charm and power. They convey so much. I wish to quote here a friend , Charles Mee, the fa mous writer and editor who says: A treasure is a unique and priceless object- va luable not only because it is made of gold or sil ver, ivory or marbl e, wood or shell , but because it stand s, like an icon, fo r the c ivili zation from which it comes : fo r the people who took the precio us materials fro m the ea rth and sea , for the crafts people who spent thei r li ves and ski ll s shaping the materials, fo r the savagery and wit , the arrogance and powe r, the wi sh fo r excell ence, the boldness, the fin esse and restrai nt of the culture that determi ned its shape and use.

These pieces were all together fo r the last time as they began to go on sale; they are now prepared to go on their own , all over the wo rld . But I have a feeling that they had a good upbringing and now they can stand on their own and bring some joy to whomever will own them in the futu re. B A RBARA J O H NSON

Ms. Johnson, former president of the Museum of American Folk Art, is Vice Chairman and Trustee of the Society. She lives in Princeton, where her privately housed collection has been widely visited and admired. She reports that its continuing sale has brought her many new fri ends-one a collector who kept the catalogs of the sale on his bedside table. The above testament, which we think fo rms a beautiful introduction to the art of collecting, is adapted fro m the preface to one of these catalogs. The next session of the sale will be at Sotheby Park Bernet in New York , December 16-17. SEA HIS1DRY, FALL 1983