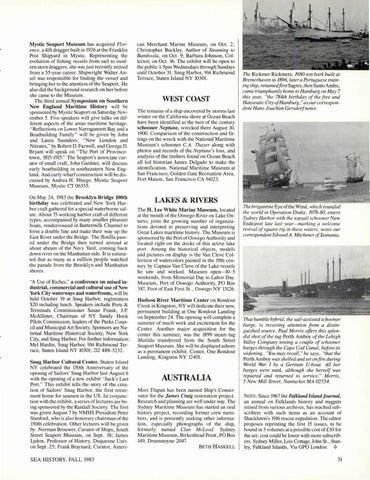 Mystic Seaport Museum has acquired Florence, a 4lft dragger built in 1926 at the Franklin Post Shipyard in Mystic. Representing the evolution of fishing vessels from sail to modern stern draggers, she was just recently retired from a 55-year career. Shipwright Walter Ansel was responsible for finding the vessel and bringing her to the attention of the Seaport. He also did the background research on her before she came to the Museum . The third annual Symposium on Southern New England Maritime History will be sponsored by Mystic Seaport on Saturday November 5. Five speakers will give talks on diffe rent aspects of the areas maritime heritage. " Refl ections on Lower Narragansett Bay and a Boatbuilding Family" will be given by John and Laura Saunders; "New London and Nitrates," by Robert D. Farwell , and George D. Bryant will speak on "The Port of Provincetown, 1815-1915." The Seaport's associate curator of small craft , John Gardner, will discuss early boatbuilding in southeastern New England. And early wharf construction will be discussed by Andrea H . Muego. Mystic Seaport Museum , Mystic CT 06355.

can Merchant Marine Museum , on Oct. 2; Christopher Buckley, Author of Steaming to Bamboo/a , on Oct. 9 ; Barbara Johnson, Collector, on Oct. 16. The exhibit will be open to the public l-5pm Wednesdays through Sundays until October 31. Snug Harbor, 914 Richmond Terrace, Staten Island NY 10301.

On May 24, 1983 the Brooklyn Bridge lOOth birthday was celebrated and New York Harbor craft gathered for a special waterborne salute. About 75 working harbor craft of di fferent types, accompanied by many smaller pleasure boats, rendezvoused in Buttermilk Channel to form a double line and make their way up the East River under the Bridge. The fl otilla passed under the Bridge then turned around at about abeam of the Navy Yard , coming back down river on the Manhattan side. It is estimated that as many as a million people watched the parade from the Brooklyn and Manhattan shores.

Snug Harbor Cultural Center, Staten Island NY celebrated the 150th Anniversary of the opening of Sailors' Snug Harbo r last August 6 with the opening of a new exhibit "Jack's Last Port ." This exhibit tells the story of the creation of Sailors' Snug Harbor, the first retirement home fo r seamen in the US. In conjunction with the exhibit , a series ofl ectures are being sponsored by the Randall Society. The fi rst was given August 7 by NMHS President Peter Stanford , who is also honorary chairman of the l50th celebration . Other lectures will be given by: Norman Brouwer, Curator of Ships, South Street Seaport Museum, on Sept. 18; James Lydon, Professo r of History, Duques ne Univ. on Sept. 25 ; Frank Braynard , Curator, Ameri SEA HISTORY, FA LL 1983

WEST COAST The remains of a ship uncovered by storms last winter on the California shore at Ocean Beach have been identified as the turn of the century schooner Neptune, wrecked there August LO, 1900. Comparison of the construction and fi ttings on the wreck with the National Maritime Museum's schooner C A. Thayer along with photos and records of the Neptune's loss, and analys is of the timbers found on Ocean Beach al l led historian James Delgado to make the identification. National Maritime Museum at San Francisco, Golden Gate Recreation Area, Fort Mason, San Francisco CA 94123.

The H. Lee White Marine Museum, located at the mouth of the Oswego River on Lake Ontario, j oins the growing number of organizations devoted to preserving and interpreting Great Lakes maritime history. The Museum is sponsored by the Port of Oswego Authority and located right on the docks of this active lake port. Among the historical objects, models and pictures on display is the Van Cleve Collection of watercolors painted in the 19th century by Captain Van Cleve of the Lake vessels he saw and worked . Museum open- 10- 5 weekends , from Memorial Day to Labor Day. Museum , Port of Oswego Authority, PO Box 387, Foot of East First St. , Oswego NY 13126. Hudson River Maritime Center on Rondout Creek in Kingston, NY will dedicate their new, permanent building at One Rondout Landing on September 24. The opening will complete a summer of much work and excitement for the Center. Another major acquisition for the center this summer, was the 1899 steam tug Ma tilda transferred from the South Street Seaport Museum . She will be di splayed ashore as a permanent exhibit. Center, One Rondout Landing, Kingston NY 12401.

Th e Rickmer Rickmers, 1980-ton bark built at Bremerhaven in 1896, later a Portuguese training ship, renamed first Sagres , then Santo Andre, came triumphantly home to Hamburg on May 7 this year, "the 784th birthday of the free and Hanseatic City of Hamburg," as our correspondent Hans-Joachim Gersdorfnotes.

The brigantine Eye of the Wind , which rounded the world in Operation Drake, 1978-80, enters Sydney Harbor with the topsail schooner New Endeavor late last year- marking a welcome revival of square rig in these waters, notes our correspondent Edward A. Mitchener of Tasmania.

That humble hybrid, the sail-assisted schooner barge, is receiving attention from a distinguished source. Paul Morris offers this splendid shot of the tug Perth Amboy of the Lehigh Valley Company towing a couple of schooner barges through the Cape Cod Canal, before its widening. "You may recall," he says, "that the Perth Amboy was shelled and set on fire during World War I by a German U-boat. All her barges were sunk, although she herself was repaired and returned to service." Morris, 5 New Mill Street, Nantucket MA 02554.

Norn: Since 1967 the Falkland Island Journal, an annual on Falkl ands history and nuggets mined from various archives, has reached subscribers with such items as an account of Shackleton's 1916 rescue expedition. The editor proposes reprinting the first 15 issues, to be bound in 3 volumes at a possible cost of ÂŁ30 for the set; cost could be lower with more subscribers. Sydney Miller, Lois Cottage, John St. , Stanley, Falkland Islands, Via GPO London . w 31