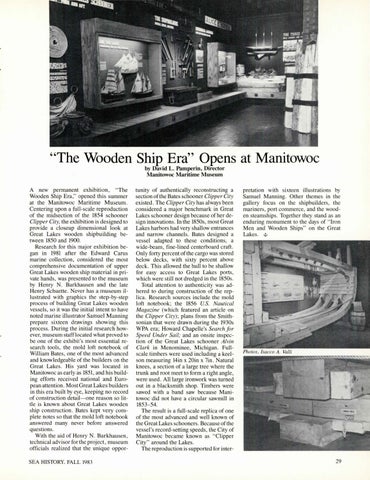 A new permanent exhibition , &quot;The Wooden Ship Era ,&quot; opened this summer at the Manitowoc Maritime Museum . Centering upon a full-scale reproduction of the midsection of the 1854 schooner Clipper City, the exhibition is des igned to provide a closeup dimensional look at Great Lakes wooden shipbuilding between 1850 and 1900. Research for this major exhibition began in 1981 after the Edwa rd Cams marine collection, considered the most comprehensive documentation of upper Great Lakes wooden ship material in private hands, was presented to the museum by Henry N. Barkhausen and the late Henry Schuette. Never has a museum il lustrated with graphics the step-by-step process of building Great Lakes wooden vessels, so it was the initial intent to have noted marine illustrator Samuel Manning prepare sixteen drawings show ing this process . During the initial research however, museum staff located what proved to be one of the exhibit&#39;s most essential research tools, the mold loft note book of William Bates, one of the most adva nced and knowledgeable of the builders on the Great Lakes. His yard was located in Manitowoc as early as 1851, and his building efforts received national and European attention. Most Great Lakes builders in this era built by eye, keeping no record of construction detail -one reason so little is known about Great Lakes wooden ship construction. Bates kept ve ry complete notes so that the mold loft notebook answered many never before answered questions. With the aid of Henry N. Barkhausen, technical advisor for the project , museum officials realized that the unique opporSEA HISTDRY. FALL 1983

tunity of authentically reconstructing a section of the Bates schooner Clipper City existed . The Clipper City has always been considered a major benchmark in Great Lakes schooner des ign because of her design innovations. In the 1850s, most Great Lakes harbors had very shallow entrances and narrow channels. Bates designed a vessel adapted to these conditions, a wide-beam , fine-lined centerboard craft. Only fo rty percent of the cargo was stored below decks, with sixty percent above deck . This allowed the hull to be shallow fo r easy access to Great Lakes ports, which we re still not dredged in the 1850s. Total attention to authenticity was adhered to during construction of the replica. Research sources include the mold loft notebook; the 1856 US. Nautical Magazine (which featured an article on the Clipper City) ; plans fro m the Smithsonian that were drawn during the 1930s WPA era ; Howard Chapelle&#39;s Search fo r Speed Unde r Sail; and an onsite inspection of the Great Lakes schooner Alvin Clark in Menominee, Michigan. Fullscale timbers were used including a keelson measuring 14in x 20in x 7in . Natu ral knees, a section of a large tree where the trunk and root meet to fo rm a right angle, were used . All large iro nwork was turned out in a blac ksmith shop. Timbers were sawed with a band saw because Manitowoc did not have a circular sawmill in 1853 - 54. The result is a full -scale replica of one of the most advanced and well known of the Great Lakes schooners. Because of the vessel&#39;s record-setting speeds, the City of Manitowoc became known as &quot;Clipper City&quot; around the Lakes. The reproduction is supported fo r inter-

pretation with sixteen illustrations by Samuel Manning. Other themes in the gallery focus on the shipbuilders, the mari ners , port commerce, and the wooden steamships. Together they stand as an endu ring monument to the days of &quot; Iron Men and Wooden Ships&quot; on the Great Lakes . .t