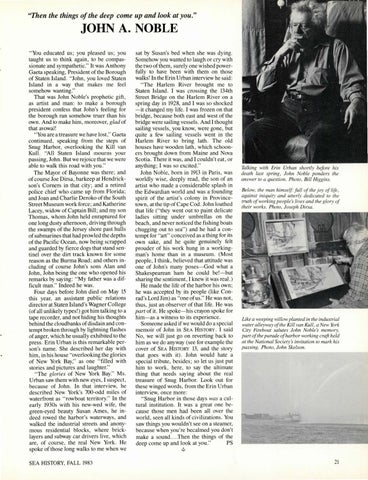 "Then the things of the deep come up and look at you."

JOHN A. NOBLE " You educated us ; you pleased us; you taught us to think again, to be compassionate and sympathetic." It was Anthony Gaeta speaking, President of the Borough of Staten Island . "John , you loved Staten Island in a way that makes me feel somehow wanting." That was John Noble's prophetic gift , as artist and man : to make a borough president confess that John's feeling fo r the borough ran somehow truer than his own. And to make him , moreover, glad of that avowal! " You are a treasure we have lost," Gaeta continued, speaking from the steps of Snug Harbor, overlooking the Kill van Kull. "All Staten Island mourns your passing, John . But we rejoice that we were able to walk this road with you." The Mayo r of Bayonne was there ; and of course Joe Dirsa, barkeep at Hendrickson's Corners in that city; and a retired police chief who came up from Florida; and Joan and Charlie Deroko of the South Street Museum work force; and Katherine Lacey, widow of Captain Bill ; and my son Thomas, whom John held enraptured for one long dusty afternoon , driving through the swamps of the Jersey shore past hulls of submarines that had prowled the depths of the Pacific Ocean, now being scrapped and guarded by fierce dogs that stand sentinel over the dirt track known for some reason as the Burma Road ; and others including of course John's sons Alan and John , John being the one who opened his remarks by saying : " My father was a difficult man ." Indeed he was. Four days before John died on May 15 this year, an assistant public relations director at Staten Island's Wagner College (of all unlikel y types!) got him talking to a tape recorder, and not hiding his thoughts behind the cloud banks of disdain and contempt broken through by lightning flashes of anger, which he usually exhibited to the press. Erin Urban is this remarkable person's name. She described her day with him , in his house "overlooking the glories of New York Bay," as one "filled with stories and pictures and laughter." " The glories of New York Bay." Ms. Urban saw them with new eyes, I suspect, because of John. In that interview, he described New York's 700-odd miles of waterfront as "rowboat territo ry." In the earl y 1930s with his new-wed wife, the green-eyed beauty Susan Ames, he indeed rowed the harbor's waterways, and walked the industrial streets and anonymous residential blocks, where bricklaye rs and subway car drivers live, which are, of course, the real New York . He spoke of those long walks to me when we SEA HIS1DRY, FALL 1983

sat by Susan's bed when she was dying. Somehow you wanted to laugh or cry with the two of them , surely one wished powerfull y to have been with them on those walks! In the Erin Urban interview he said : " The Harlem River brought me to Staten Island . I was crossing the 134th Street Bridge on the Harlem River on a spring day in 1928, and I was so shocked - it changed my life. I was frozen on that bridge, because both east and west of the bridge were sailing vessels. And I thought sailing vessels, you know, were gone, but quite a few sailing vessels went in the Harlem Ri ver to bring lath . The old houses have wooden lath , which schooners brought down from Maine and Nova Scotia . There it was, and I couldn't eat, or anything ; I was so excited ." John Noble, born in 1913 in Paris, was worldly wise, deeply read , the son of an artist who made a considerable splash in the Edwardian world and was a fo unding spirit of the artist's colony in Provincetown , at the tip of Cape Cod. John loathed that life (" they went out to paint delicate ladies sitting under umbrellas on the beach, and never noticed the fishing boats chugging out to sea" ) and he had a contempt for "art" conceived as a thing for its own sake, and he quite genuinely felt prouder of his work hung in a workingman's home than in a museum. (Most people, I think , believed that attitude was one of John's many poses-God what a Shakespearean ham he could be!-but sharing the sentiment , I knew it was real. ) He made the life of the harbor his own; he was accepted by its people (like Conrad 's Lord Jim) as "oneofus." He was not , thus , just an observer of that life. He was part of it. He spoke- his crayon spoke for him-as a witness to its experience. Someone asked if we would do a special memoir of John in SEA HISTORY. I said No, we will just go on reverting back to him as we do anyway (see for example the cover of SEA HISTORY 13, and the story that goes with it). John would hate a special tribute, besides ; so let us just put him to work, here, to say the ultimate thing that needs saying about the real treasure of Snug Harbor. Look out fo r these winged words, from the Erin Urban interview, once more: " Snug Harbor in those days was a cultural institution. It was a great one because those men had been all over the world , seen all kinds of civilizations. You saw things you wouldn't see on a steamer, because when you're becalmed you don't make a sound .. ..Then the things of the PS deep come up and look at you."

Talking with Erin Urban shortly before his death last spring, John Noble ponders the answer to a question. Photo, Bill Higgins. Below, 1he man himself' fall of 1he j oy of life , againsl iniquity and uuerly dedica1ed 10 the lru.lh of working p eople's li ves and 1he glory of 1heir works. Photo, Joseph Dirsa.