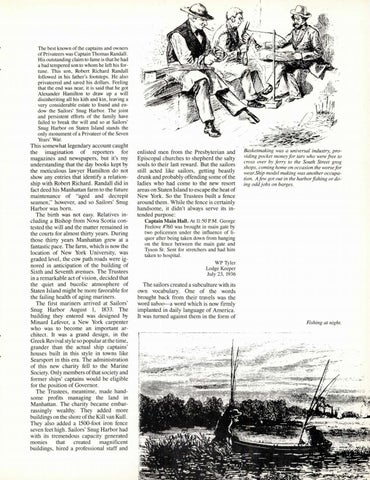 The best known of the captains and owners of Privateers was Captain Thomas Randall. His outstanding claim to fame is that he had a bad tempered son to whom he left his fortune. This son, Robert Richard Randall followed in his father's footsteps. He also privateered and saved his dollars. Feeling that the end was near, it is said that he got Alexander Hamilton to draw up a will disinheriting all his kith and kin , leaving a very considerable estate to found and endow the Sailors' Snug Harbor. The joint and persistent efforts of the family have failed to break the will and so at Sailors' Snug Harbor on Staten Island stand s the only monument of a Privateer of the Seven Years' War.

This somewhat legendary account caught the imagination of reporters for magazines and newspapers, but it's my understanding that the day books kept by the meticulous lawyer Hamilton do not show any entries that identify a relationship with Robert Richard. Randall did in fact deed his Manhattan farm to the future maintenance of "aged and decrepit seamen," however, and so Sailors' Snug Harbor was born. The birth was not easy. Relatives including a Bishop from Nova Scotia contested the will and the matter remained in the courts for almost thirty years. During those thirty years Manhattan grew at a fantastic pace. The farm, which is now the location of New York University, was graded level , the cow path roads were ignored in anticipation of the building of Sixth and Seventh avenues. The Trustees in a remarkable act of vision, decided that the quiet and bucolic atmosphere of Staten Island might be more favorable for the failing health of aging mariners. The first mariners arrived at Sailors' Snug Harbor August 1, 1833. The building they entered was designed by Minard Lefever, a New York carpenter who was to become an important architect. It was a grand design , in the Greek Revival style so popular at the time, grander than the actual ship captains' houses built in this style in towns like Searsport in this era. The administration of this new charity fell to the Marine Society. Only members of that society and former ships' captains would be eligible for the position of Governor. The Trustees, meantime, made handsome profits managing the land in Manhattan. The charity became embarrassingly wealthy. They added more buildings on the shore of the Kill van Kull . They also added a 1500-foot iron fence seven feet high . Sailors' Snug Harbor had with its tremendous capacity generated monies that created magnificent buildings, hired a professional staff and

enlisted men from the Presbyterian and Episcopal churches to shepherd the salty souls to their last reward . But the sailors still acted like sailors, getting beastly drunk and probably offending some of the ladies who had come to the new resort areas on Staten Island to escape the heat of New York . So the Trustees built a fence around them. While the fence is certainly handsome, it didn't always serve its intended purpose:

Basketmaking was a universal industry, providing pocket money for tars who were free to cross over by ferry to the South Street grog shops, coming home on occasion the worse for wear.Ship model making was another occupation . Afew got out in the harbor fishing or doing odd jobs on barges.

Captain Main Hall. At 11:50 P.M. George Feelove #760 was brought in main gate by two policemen under the influence of liquor after being taken down from hanging on the fence between the main gate and Tyson St. Sent for stretchers and had him taken to hospital. WP Tyler Lodge Keeper July 23, 1936

The sailors created a subculture with its own vocabulary. One of the words brought back from their travels was the word taboo-a word which is now firmly implanted in daily language of America . It was turned against them in the form of Fishing at night.