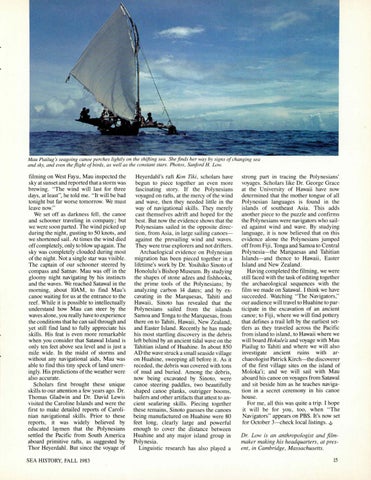 Mau Piailug 's seagoing canoe perches lightly on the shifting sea. She finds her way by signs of changing sea and sky, and even the flight of birds, as well as the constant stars. Photos, Sanford H. Low.

filming on West Fayu , Mau inspected the sky at sunset and reported that a storm was brewing. " The wind will last for three days, at least", he told me. "It will be bad tonight but far worse tomorrow. We must leave now." We set off as darkness fell , the canoe and schooner traveling in company ; but we were soon parted . The wind picked up during the night, gusting to 50 knots, and we shortened sail. At times the wind died off completely, only to blow up again. The sky was completely clouded during most of the night. Not a single star was visible. The captain of our schooner steered by compass and Satnav. Mau was off in the gloomy night navigating by his instincts and the waves. We reached Satawa! in the morning, about lOAM, to find Mau 's canoe waiting for us at the entrance to the reef. While it is possible to intellectually understand how Mau can steer by the waves alone, you really have to experience the conditions that he can sail through and yet still find land to fully appreciate his skills. His feat is even more remarkable when you consider that Satawa! Island is only ten feet above sea level and is just a mile wide. In the midst of storms and without any navigational aids, Mau was able to find this tiny speck of land unerringly. His predictions of the weather were also accurate. Scholars first brought these unique skills to our attention a few years ago. Dr. Thomas Gladwin and Dr. David Lewis visited the Caroline Islands and were the first to make detailed reports of Carolinian navigational skills. Prior to these reports, it was widely believed by educated laymen that the Polynesians settled the Pacific from South America aboard primitive rafts, as suggested by Thor Heyerdahl. But since the voyage of SEA HIS1DRY, FALL 1983

Heyerdahl 's raft Kon Tiki , scholars have begun to piece together an even more fascinating story. If the Polynesians voyaged on rafts, at the mercy of the wind and wave, then they needed little in the way of navigational skills . They merely cast themselves adrift and hoped for the best. But now the evidence shows that the Polynesians sailed in the opposite direction , from Asia , in large sailing canoesagainst the prevailing wind and waves . They were true explorers and not drifters . Archaelogical evidence on Polynesian migration has been pieced together in a lifetime's work by Dr. Yosihiko Sinoto of Honolulu's Bishop Museum . By studying the shapes of stone adzes and fishhooks , the prime tools of the Polynesians ; by analyzing carbon 14 dates ; and by excavating in the Marquesas , Tahiti and Hawaii , Sinoto has revealed that the Polynesians sailed from the islands Samoa and Tonga to the Marquesas , from there on to Tahiti , Hawaii , New Zealand, and Easter Island. Recently he has made his most startling discovery in the debris left behind by an ancient tidal wave on the Tahitian island of Huahine. In about 850 AD the wave struck a small seaside village on Huahine, sweeping all before it. As it receded , the debris was covered with tons of mud and buried . Among the debris , now being excavated by Sinoto, were canoe steering paddles, two beautifully shaped canoe planks, outrigger booms, hailers and other artifacts that attest to ancient seafaring skills. Piecing together these remains, Sinoto guesses the canoes being manufactured on Huahine were 80 feet long, clearly large and powerful enough to cover the distance between Huahine and any major island group in Polynesia . Linguistic research has also played a

strong part in tracing the Polynesians' voyages. Scholars like Dr. George Grace at the University of Hawaii have now determined that the mother tongue of all Polynesian languages is found in the islands of southeast Asia. This adds another piece to the puzzle and confirms the Polynesians were navigators who sailed against wind and wave. By studying language, it is now believed that on this evidence alone the Polynesians jumped off from Fiji , Tonga and Samoa to Central Polynesia- the Marquesas and Tahitian Islands- and thence to Hawaii , Easter Island and New Zealand. Having completed the filming, we were still faced with the task of editing together the archaeological sequences with the film we made on Satawa!. I think we have succeeded . Watching "The Navigators," our audience will travel to Huahine to participate in the excavation of an ancient canoe ; to Fiji , where we will find pottery that defines a trail left by the earliest settlers as they traveled across the Pacific from island to island , to Hawaii where we will board Hokule'a and voyage with Mau Piailug to Tahiti and where we will also investigate ancient ruins with archaeologist Patrick Kirch-the discoverer of the first village sites on the island of Moloka'i ; and we will sail with Mau aboard his canoe on voyages from Satawa! and sit beside him as he teaches navigation in a secret ceremony in his canoe house. For me, all this was quite a trip. I hope it will be for you , too, when " The Navigators" appears on PBS. It's now set for October 3-check local listings . ,r,

Dr. Low is an anthropologist and filmmaker making his headquarters, at present, in Cambridge, Massachusetts. 15