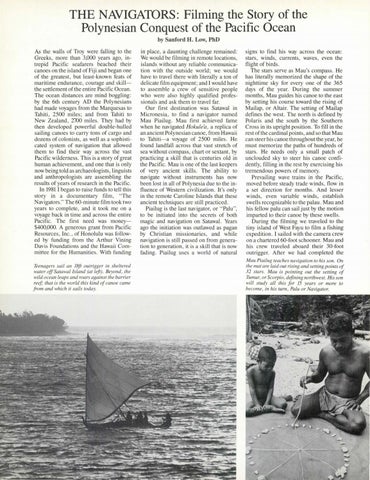 THE NAVIGA1DRS: Filming the Story of the Polynesian Conquest of the Pacific Ocean by Sanford H. Low, PhD

As the walls of Troy were falling to the Greeks, more than 3,000 years ago, intrepid Pacific seafarers beached their canoes on the island of Fiji and began one of the greatest, but least-known feats of maritime endurance, courage and skillthe settlement of the entire Pacific Ocean. The ocean distances are mind boggling: by the 6th century AD the Polynesians had made voyages from the Marquesas to Tahiti , 2500 miles; and from Tahiti to New Zealand, 2700 miles . They had by then developed powerful double-hulled sailing canoes to carry tons of cargo and dozens of colonists, as well as a sophisticated system of navigation that allowed them to find their way across the vast Pacific wilderness. This is a story of great human achievement, and one that is only now being told as archaeologists, linguists and anthropologists are assembling the results of years of research in the Pacific. In 1981 I began to raise funds to tell this story in a documentary film, "The Navigators." The 60-minute film took two years to complete, and it took me on a voyage back in time and across the entire Pacific. The first need was money$400,000. A generous grant from Pacific Resources , Inc. , of Honolulu was followed by funding from the Arthur Vining Davis Foundations and the Hawaii Committee for the Humanities . With funding Teenagers sail an 18ft outrigger in sheltered water off Satawa[ Island (at left). Beyond, the wild ocean leaps and roars against the barrier reef; that is the world this kind of canoe came from and which it sails today.

in place, a daunting challenge remained : We would be filming in remote locations, islands without any reliable communication with the outside world; we would have to travel there with literally a ton of delicate film equipment; and I would have to assemble a crew of sensitive people who were also highly qualified professionals and ask them to travel far. Our first destination was Satawa! in Micronesia, to find a navigator named Mau Piailug. Mau first achieved fame when he navigated Hokule'a , a replica of an ancient Polynesian canoe, from Hawaii to Tahiti-a voyage of 2500 miles . He found landfall across that vast stretch of sea without compass, chart or sextant, by practicing a skill that is centuries old in the Pacific. Mau is one of the last keepers of very ancient skills. The ability to navigate without instruments has now been lost in all of Polynesia due to the influence of Western civilization. It's only in the remote Caroline Islands that these ancient techniques are still practiced . Piailug is the last navigator, or "Palu'', to be initiated into the secrets of both magic and navigation on Satawa! . Years ago the initiation was outlawed as pagan by Christian missionaries, and while navigation is still passed on from generation to generation, it is a skill that is now fading. Piailug uses a world of natural

signs to find his way across the ocean: stars, winds, currents, waves, even the flight of birds. The stars serve as Mau's compass . He has literally memorized the shape of the nighttime sky for every one of the 365 days of the year. During the summer months, Mau guides his canoe to the east by setting his course toward the rising of Mailap, or Altair. The setting of Mailap defines the west. The north is defined by Polaris and the south by the Southern Cross in its upright position. To fill in the rest of the cardinal points , and so that Mau can steer his canoe throughout the year, he must memorize the paths of hundreds of stars. He needs only a small patch of unclouded sky to steer his canoe confidently, filling in the rest by exercising his tremendous powers of memory. Prevailing wave trains in the Pacific, moved before steady trade winds , flow in a set direction for months. And lesser winds, even variable winds, establish swells recognizable to the palau . Mau and his fellow palu can sail just by the motion imparted to their canoe by these swells. During the filming we traveled to the tiny island of West Fayu to film a fishing expedition. I sailed with the camera crew on a chartered 60-foot schooner. Mau and his crew traveled aboard their 30-foot outrigger. After we had completed the Mau Piailug teaches navigation to his son. On the mat are laid out rising and setting points of 32 stars. Mau is pointing out the setting of Tumur, or Scorpio, defining northwest. His son will study all this for 15 years or more to become, in his turn , Palu or Navigator.