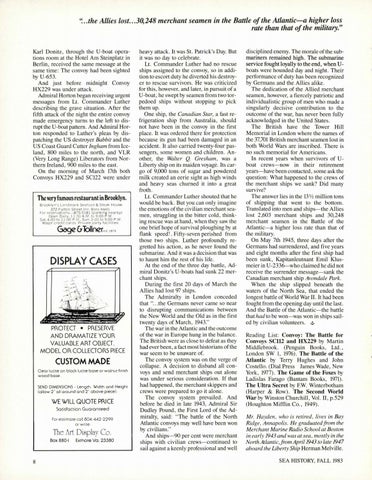 Allies lost ... 30,248 merchant seamen in the Battle of the Atlantic-a higher loss rate than that of the military.&quot;

Karl Donitz , through the U-boat operations room at the Hotel Am Steinplatz in Berlin, received the same message at the same time : The convoy had been sighted by U-653. And just before midnight Convoy HX229 was under attack. Admiral Horton began receiving urgent messages from Lt. Commander Luther describing the grave situation. After the fifth attack of the night the entire convoy made emergency turns to the left to disrupt the U-boat pattern. And Admiral Horton responded to Luther&#39;s pleas by dispatching the US destroyer Babbit and the US Coast Guard Cutter Ingham from Iceland, 800 miles to the north , and VLR (Very Long Range) Liberators from Northern Ireland , 900 miles to the east. On the morning of March 17th both Convoys HX229 and SC122 were under

CUSTOM MADE Clear lucite on block lucite base or walnut finish wood base . SEND DIMENSIONS Âˇ Length, Width and Height (allow 2 &quot; all around and 2&quot; above piece).

heavy attack. It was St. Patrick&#39;s Day. But it was no day to celebrate. Lt. Commander Luther had no rescue ships assigned to the convoy, so in addition to escort duty he diverted his destroyer to rescue survivors . He was criticized for this, however, and later, in pursuit of a U-boat, he swept by seamen from two torpedoed ships without stopping to pick them up. One ship, the Canadian Star, a fast refrigeration ship from Australia, should not have been in the convoy in the first place. It was ordered there for protection because its gun had been damaged in an accident. It also carried twenty-four passengers, some women and children. Another, the Walter Q. Gresham, was a Liberty ship on its maiden voyage. Its cargo of 9,000 tons of sugar and powdered milk created an eerie sight as high winds and heavy seas churned it into a great froth . Lt. Commander Luther shouted that he would be back . But you can only imagine the emotions of the civilian merchant seamen , struggling in the bitter cold , thinking rescue was at hand , when they saw the one brief hope of survival ploughing by at flank speed! . Fifty-seven perished from those two ships . Luther profoundly regretted his action, as he never found the submarine. And it was a decision that was to haunt him the rest of his life. At the end of the three day battle, Admiral Donitz&#39;s U-boats had sunk 22 merchant ships. During the first 20 days of March the Allies had lost 97 ships. The Admiralty in London conceded that &quot;.. .the Germans never came so near to disrupting communications between the New World and the Old as in the first twenty days of March, 1943.&quot; The war in the Atlantic and the outcome of the war in Europe hung in the balance. The British were as close to defeat as they had ever been, a fact most historians of the war seem to be unaware of. The convoy system was on the verge of collapse. A decision to disband all convoys and send merchant ships out alone was under serious consideration. If that had happened, the merchant skippers and crews were prepared to go it alone. The convoy system prevailed. And before he died in late 1943, Admiral Sir Dudley Pound , the First Lord of the Admiralty, said: &quot;The battle of the North Atlantic convoys may well have been won by civilians.&quot; And ships-90 per cent were merchant ships with civilian crews-continued to sail against a keenly professional and well

disciplined enemy. The morale of the submariners remained high. The submarine service fought loyally to the end, when Uboats were hounded day and night. Their performance of duty has been recognized by Germans and the Allies alike. The dedication of the Allied merchant seamen, however, a fiercely patriotic and individualistic group of men who made a singularly decisive contribution to the outcome of the war, has never been fully acknowledged in the United States. The British have the Tower Hill Memorial in London where the names of the 37,701 British merchant seamen lost in both World Wars are inscribed. There is no such memorial for Americans . In recent years when survivors of Uboat crews-now in their retirement years-have been contacted , some ask the question : What happened to the crews of the merchant ships we sank? Did many survive? The answer lies in the 13 Y2 million tons of shipping that went to the bottom. Translated into men and ships-the Allies lost 2 ,603 merchant ships and 30,248 merchant seamen in the Battle of the Atlantic-a higher loss rate than that of the military. On May 7th 1945, three days after the Germans had surrendered, and five years and eight months after the first ship had been sunk, Kapitanleutnant Emil Klusmeier in U-2336-who claimed he did not receive the surrender message- sank the Canadian merchant ship Avondale Park. When the ship slipped beneath the waters of the North Sea , that ended the longest battle of World War II . It had been fought from the opening day until the last. And the Battle of the Atlantic-the battle that had to be won-was won in ships sailed by civilian volunteers. w Reading List : Convoy: The Battle for Convoys SC112 and HX229 by Martin Middlebrook. (Penguin Books, Ltd ., London SW 1, 1976). The Battle of the Atlantic by Terry Hughes and John Costello. (Dial Press James Wade, New York, 1977). The Game of the Foxes by Ladislas Farago (Bantam Books , 1971). The Ultra Secret by F.W. Winterbotham (Harper &amp; Row). The Second World War by Winston Churchill, Vol. II, p.529 (Houghton Mifflin Co., 1949) . Mr. Hayden, who is retired, lives in Bay Ridge, Annapolis. He graduated from the Merchant Marine Radio School at Boston in early 1943 and was at sea, mostly in the North Atlantic, from April 1943 to late 1947 aboard the Liberty Ship Herman Melville. SEA HISTORY, FALL 1983