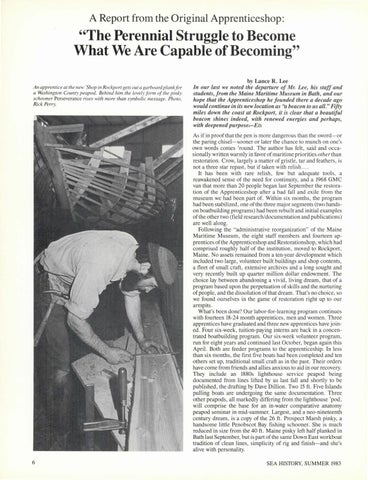 A Report from the Original Apprenticeshop:

&quot;The Perennial Struggle to Become What We Are Capable of Becoming&quot; An apprentice at the new &#39;Shop in Rockport gets out a garboard plank for a Washingron County peapod. Behind him the lovely form of the pinky schooner Perseverance rises with more than symbolic message. Photo, Rick Perry.

by Lance R. Lee In our last we noted the departure of Mr. Lee, his staff and students, from the Maine Maritime Museum in Bath, and our hope that the Apprenticeshop he founded there a decade ago would continue in its new location as &#39;h beacon to us all.&quot; Fifty miles down the coast at Rockport, it is clear that a beautiful beacon shines indeed, with renewed energies and perhaps, with deepened purpose,.-ED.

As if in proof that the pen is more dangerous than the sword-or the paring chisel- sooner or later the chance to munch on one&#39;s own words comes &#39; round . The author has felt , said and occasionally written warmly in favor of maritime priorities other than restoration . Crow, largely a matter of gristle, tar and feathers, is not a three star repast , but if taken with relish .... It has been with rare relish , few but adequate tools , a reawakened sense of the need for continuity, and a 1968 GMC van that more than 20 people began last September the restoration of the Apprenticeshop after a bad fall and exile from the museum we had been part of. Within six months, the program had been stabilized , one of the three major segments (two handson boatbuilding programs) had been rebuilt and initial examples of the other two (field research/documentation and publications) are well along. Following the &quot;administrative reorganization&quot; of the Maine Maritime Museum , the eight staff members and fourteen apprentices of the Apprenticeshop and Restorationshop, which had comprised roughly half of the institution , moved to Rockport , Maine. No assets remained from a ten-year development which included two large, volunteer built buildings and shop contents, a fleet of small craft, extensive archives and a long sought and very recently built up quarter million dollar endowment. The choice lay between abandoning a vivid, living dream, that of a program based upon the perpetuation of skills and the nurturing of people, and the dissolution of that dream. That&#39;s no choice, so we found ourselves in the game of restoration right up to our armpits. What&#39;s been done? Our labor-for-learning program continues with fourteen 18-24 month apprentices, men and women. Three apprentices have graduated and three new apprentices have joined. Four six-week, tuition-paying interns are back in a concentrated boatbuilding program. Our six-week volunteer program , run for eight years and continued last October, began again this April. Both are feeder programs to the apprenticeship. In less than six months, the first five boats had been completed and ten others set up, traditional small craft as in the past. Their orders have come from friends and allies anxious to aid in our recovery. They include an 1880s lighthouse service peapod being documented from lines lifted by us last fall and shortly to be published , the drafting by Dave Dillion. Two 15 ft. Five Islands pulling boats are undergoing the same documentation. Three other peapods, all markedly differing from the lighthouse &#39;pod , will comprise the base for an in-water comparative anatomy peapod seminar in mid-summer. Largest , and a neo-nineteenth century dream , is a copy of the 26 ft. Prospect Marsh pinky, a handsome little Penobscot Bay fishing schooner. She is much reduced in size from the 40 ft. Maine pinky left half planked in Bath last September, but is part of the same Down East workboat tradition of clean lines, simplicity of rig and finish-and she&#39;s alive with personality. 6