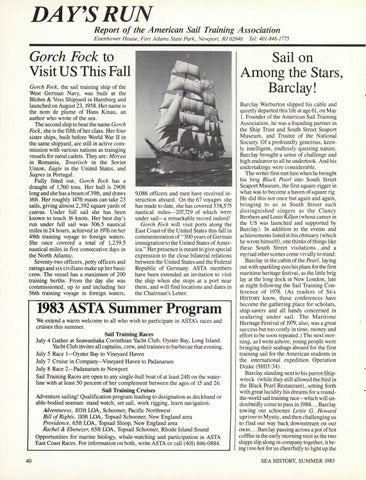 Gorch Fock to Visit US This Fall Gorch Fack, the sail training ship of the West German Navy, was built at the Blohm &amp; Voss Shipyard in Hamburg and launched on August 23, 1958. Hername is the nom de plume of Hans Kinau , an author who wrote of the sea. The second ship to bear the name Gorch Fack, she is the fifth of her class. Her four sister ships, built before World War II in the same shipyard, are still in active commission with various nations as trainging vessels for naval cadets. They are: Mircea in Romania , Tovarisch in the Soviet Union, Eagle in the United States, and Sagres in Portugal. Fully fitted out, Gorch Fack has a draught of 1,760 tons. Her hull is 290ft long and she has a beam of39ft, and draws 16ft. Her roughly 147ft masts can take 23 sails, giving almost 2,392 square yards of canvas. Under full sail she has been known to touch 16 knots. Her best day&#39;s run under full sail was 306.5 nautical miles in 24 hours, achieved in 1976 on her 49th training voyage to foreign waters. She once covered a total of 1,239.5 nautical miles in fi;ve consecutive days in the North Atlantic. Seventy-two officers, petty officers and ratings and six civilians make up her basic crew. The vessel has a maximum of 200 training berths. From the day she was commissioned, up to and including her 56th training voyage in foreign waters,

Sail on Among the Stars, Barclay!

9,086 officers and men have received instruction aboard. On the 67 voyages she has made to date, she has covered 338,575 nautical miles-207,729 of which were under sail-a remarkable record indeed! Gorch Fack will visit ports along the East Coast of the United States this fall in commemoration of &quot; 300 years of German immigration to the United States of America.&quot; Her presence is meant to give special expression to the close bilateral relations between the United States and the Federal Republic of Germany. ASTA members have been extended an invitation to visit the ship when she stops at a port near them, and will find locations and dates in the Chairman&#39;s Letter.

Barclay Warburton slipped his cable and quietly departed this life at age 61 , on May 1. Founder of the American Sail Training Association , he was a foÂľnding partner in the Ship Trust and South Street Seaport Museum , and Trustee of the National Society. Of a profoundly generous, keenly intelligent, endlessly questing nature, Barclay brought a sense of challenge and high endeavor to all he undertook. And his undertakings were considerable. The writer first met him when he brought his brig Black Pearl into South Street Seaport Museum , the first square-rigger in what was to become a haven of square rig. He did this not once but again and again , bringing to us in South Street such di stingui shed singers as the Clancy Brothers and Louis Killen (whose career in the US was launched and supported by Barclay). In addition to the events and achievements listed in his obituary (which he wrote himself) , one thinks of things like these South Street visitations ... and a myriad other scenes come vivid! y to mind : Barclay in the cabin of the Pearl, laying out with sparkling eyes his plans for the first maritime heritage festival, as the little brig lay at the long dock in New London , late at night following the Sail Training Conference of 1978. (As readers of SEA HIS&#39;TDRY know, these conferences have become the gathering place for scholars, ship-savers and all hands concerned in seafaring under sail. The Maritime Heritage Festival of 1979, also, was a great success but too costly in time, money and effort to be soon repeated .) The next morning, as I went ashore, young people were bringing their seabags aboard for the first training sail for the American students in the international expedition Operation Drake (SH13 :34) . Barclay standing next to his parrot Shipwreck (while they still allowed the bird in the Black Pearl Restaurant), setting forth with great lucidity his dreams for a roundthe-world sail training race-which will undoubtedly come to pass in 1988... .Barclay towing our schooner Lettie G. Howard upriver to Mystic, and then challenging us to find our way back downstream on our owm .... Barclay passing across a pot of hot cofffee in the early morning mist as the two shiws slip along in company together, it being l too hot for us cheerfully to light up the SEA HISTDRY, SUMMER 1983