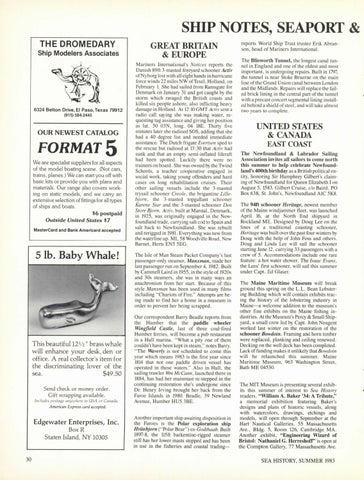 FORMATS We are specialist suppliers for all aspects of the model boating scene. (Not cars, trains, planes.) We can start you off with basic kits or provide you with plans and materials . Our range also covers working on static models, and we carry an extensive selection of fittings for all types of ships and boats.

This beautiful l2 V2&quot; brass whale will enhance your desk, den or office. A real collector&#39;s item for the discriminating lover of the $49.50 sea. Send check or money order. Gift wrapping available. /11c/11des Âľostage anywhere in USA or Ca11ada.

GREAT BRITAIN &amp;EUROPE Mariners International &#39;s Norices reports the Danish 89ft 3-masted foreyard schooner Activ ofNyborg lost with all eight hands in hurricane force winds 22 miles NW ofTexel, Holland , on February I. She had sailed from Ramsgate for Denmark on January 31 and got caught by the storm which ravaged the British coasts and killed six people ashore, also inflicting heavy damage in Holland . At 12: 10 GMT Acrivsent a radio call saying she was making water, requesting tug assistance and giving her position as lat. SO 03N , long. 04 18E. Thirty five minutes later she radioed SOS, adding that she had a 40 degree list and needed immediate assistance. The Dutch frigate Evensen sped to the rescue but radioed at 13:30 that Acriv had sunk and that an empty semi-inflated liferaft had been spotted. Luckily there were no trainees on board . She was owned by the Twind Schools, a teacher cooperative engaged in social work , taking young offenders and hard cases on long rehabilitation cruises. Their other sailing vessels include the 3-masted trysail schooner Creole, the brigantine Lillebjorn, the 3-masted topgallant schooner Karene Srar and the 3-masted schooner Den Srore Bjorn. Acriv, built at Marstal, Denmark , in 192S, was originally engaged in the Newfoundland trade, carrying salt cod to Spain and salt back to Newfoundland. She was rebuilt and rerigged in 1981. Everything was new from the waterline up. MI, S8 Woodville Road , New Barnet, Herts ENS SEG. The Isle of Man Steam Packet Company&#39;s last passenger-only steamer, Manxman, made her last passenger run on September 4, 1982. Built by Cammell Laird in 19SS, in the style of 1920s and 30s steamers, she was in many ways an anachronism from her start. Because of this style Manxman has been used in many films including &quot; Chariots of Fire.&quot; Attempts are being made to find her a home in a museum in order to prevent her being scrapped. Our correspondent Barry Beadle reports from the Humber that the paddle wheeler Wingfield Castle, last of three coal-fired Humber ferries , will become a pub restaurant in a Hull marina. &quot; What a pity one of them couldn&#39;t have been kept in steam ,&quot; notes Barry. &quot;The Waverly is not scheduled to come this year which means 1983 is the first year since 1814 that not one paddle driven vessel has operated in these waters.&quot; Also in Hull , the sailing trawler Wm McCann, launched there in 1884, has had her mainmast re-stepped in the continuing restoration she&#39;s undergone since Dr. Henry Irving brought her back from the Faroe Islands in 1980. Beadle, 39 Newland Avenue, Humber HUS 3BE.

Another important ship awaiting disposition in the Faroes is the Polar exploration ship Hvitebjom (&quot;Polar Bear&quot;) ex-Godthaab. Built 1897-8, the 115ft barkentine-rigged steamer still has her lower masts stepped and has been in use in the fisheries and coastal trading-

reports World Ship Trust trustee Erik Abranson, head of Mariners International. The Blisworth Tunnel, the longest canal tun nel in England and one of the oldest and most important, is undergoing repairs. Built in 1797, the tunnel is near Stoke Bruerne on the main line of the Grand Union canal between London and the Midlands. Repairs will replace the failed brick lining in the central part of the tunnel with a precast concert segmental lining installed behind a shield of steel, and will take almost two years to complete.

UNITED STATES &amp;CANADA EAST COAST The Newfoundland &amp; Labrador Sailing Association invites all sailors to come north this summer to help celebrate Newfoundland&#39;s 400th birthday as a British political entity, honoring Sir Humphrey Gilbert&#39;s claiming of Newfoundland for Queen Elizabeth I on August S, 1S83. Gilbert Cruise, c/o Baird, PO Box 638, St. John&#39;s, Newfoundland AIC SK8. The 94ft schooner Heritage, newest member of the Maine windjammer fleet , was launched April 16, at the North End shipyard in Rock.land ME. Designed by Doug Lee on the lines of a traditional coasting schooner, Heritage was built over the past four winters by Doug with the help of John Foss and others. Doug and Linda Lee will sail the schooner starting June 12 , carrying 33 passengers with a crew of S. Accommodations include one rare feature: a hot water shower. The Isaac Evans, the Lees&#39; first schooner, will sail this summer under Capt. Ed Glaser. The Maine Maritime Museum will break ground this spring on the L.L. Bean Lobstering Building which will contain exhibits tracing the history of the lobstering industry in Maine-a welcome addition to the museum&#39;s other fine exhibits on the Maine fishing industries. At the Museum&#39;s Percy &amp; Small Shipyard , a small crew led by Capt. John Neugent worked last winter on the restoration of the schooner Bowdoin. Framing and horn timber were replaced , planking and ceiling renewed. Decking on the well deck has been completed. Lack of funding makes it unlikely that Bowdoin will be relaunched this summer. Maine Maritime Museum , 963 Washington Street , Bath ME 04S30.

The MIT Museum is presenting several exhibits this summer of interest to Sea History readers. &quot;William A. Baker &#39;34: A Tribute;&#39; a memorial exhibition featuring Baker&#39;s designs and plans of historic vessels, along with watercolors, drawings, etchings and models, will open through September at the Hart Nautical Galleries, SS Massachusetts Ave. , Bldg. S, Room 126, Cambridge MA . Another exhibit, &quot;Engineering Wizard of Bristol: Nathaniel G. Herreshofr&#39; is open at the Com1pton Gallery, 77 Massachusetts Ave.