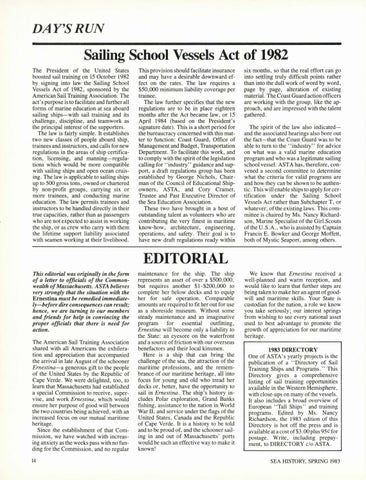 Sailing School Vessels Act of 1982 The President of the United States boosted sail training on 15 October 1982 by signing into law the Sailing School Vessels Act of 1982, sponsored by the American Sail Training Association. The act&#39; s purpose is to facilitate and further all forms of marine education at sea aboard sailing ships-with sail training and its challenge, discipline , and teamwork as the principal interest of the supporters. The law is fairly simple. It establishes two new classes of people aboard ship, trainees and instructors, and calls for new regulations in the areas of ship certification, licensing, and manning-regulations which would. be more compatible with sailing ships and open ocean cruising. The law is applicable to sailing ships up to 500 gross tons, owned or chartered by non-profit groups , carrying six or more trainees, and conducting marine education. The law permits trainees and instructors to be handled directly in their true capacities, rather than as passengers who are not expected to assist in working the ship, or as crew who carry with them the lifetime support liability associated with seamen working at their livelihood.

This provision should facilitate insurance and may have a desirable downward effect on the rates . The law requires a $50,000 minimum liability coverage per trainee. The law further specifies that the new regulations are to be in place eighteen months after the Act became law, or 15 April 1984 (based on the President&#39;s signature date). This is a short period for the bureaucracy concerned with this matter to function: Coast Guard , Office of Management and Budget, Transportation Department. To facilitate this work, and to comply with the spirit of the legislation calling for &#39; &#39;industry&#39;&#39; guidance and support, a draft regulations group has been established by George Nichols, Chairman of the Council of Educational Shipowners, ASTA , and Cory Cramer, Trustee and Past Executive Director of the Sea Education Association . These two have brought in a host of outstanding talent as volunteers who are contributing the very finest in maritime know-how, architecture, engineering, operations, and safety. Their goal is to have new draft regulations ready within

six months, so that the real effort can go into settling truly difficult points rather than into the dull work of word by word, page by page, alteration of existing material. The Coast Guard action officers are working with the group, like the approach, and are impressed with the talent gathered. The spirit of the law also indicatedand the associated hearings also bore out the fact-that the Coast Guard was to be able to turn to the &quot;industry&quot; for advice on what was a valid marine education program and who was a legitimate sailing school vessel. ASTA has, therefore , convened a second committee to determine what the criteria for valid programs are and how they can be shown to be authentic . This will enable ships to apply forcertification under the Sailing School Vessels Act rather than Subchapter T , or whatever , of the existing laws. This committee is chaired by Ms . Nancy Richardson , Marine Specialist of the Girl Scouts of the U.S.A., who is assisted by Captain Francis E . Bowker and George Moffett, both of Mystic Seaport, among others .

EDITORIAL This editorial was originally in the fonn of a letter to officials of the Commonwealth of Massachusetts. ASTA believes very strongly that the situation with the Ernestina must be remedied immediately-before dire consequences can result; hence, we are turning to our members and friends for help in convincing the proper officials that there is need for action. The American Sail Training Association shared with all Americans the exhileration and appreciation that accompanied the arrival in late August of the schooner Ernestina-a generous gift to the people of the United States by the Republic of Cape Verde. We were delighted , too, to learn that Massachusetts had established a special Commission to receive, supervise , and work Ernestina, which would ensure her purpose of good will between the two countries being achieved, with an increased focus on our mutual maritime heritage . Since the establishment of that Commission, we have watched with increasing anxiety as the weeks pass with no funding for the Commission, and no regular 14

maintenance for the ship. The ship represents an asset of over a $500,000, but requires another $1-$200,000 to complete her below decks and to equip her for safe operation. Comparable amounts are required to fit her out for use as a shoreside museum. Without some steady maintenance and an imaginative program for essential outfitting, Ernestina will become only a liability to the StateÂˇ: an eyesore on the waterfront and a source of friction with our overseas benefactors and their local kinsmen . Here is a ship that can bring the challenge of the sea, the attraction of the maritime professions, and the remembrance of our maritime heritage , all into focus for young and old who tread her decks or , better, have the opportunity to sail in Ernestina. The ship&#39;s history includes Polar exploration, Grand Banks fishing, assistance to the nation in World War II , and service under the flags of the United States, Canada and the Republic of Cape Verde. It is a history to be told and to be proud of, and the schooner sailing in and out of Massachusetts&#39; ports would be such an effective way to make it known!

We know that Ernestina received a well-planned and warm reception , and would like to learn that further steps are being taken to make her an agent of goodwill and maritime skills. Your State is custodian for the nation, a role we know you take seriously; our interest springs from wishing to see every national asset used to best advantage to promote the growth of appreciation for our maritime heritage . 1983 DIRECTORY One of ASTA&#39;s yearly projects is the publication of a &quot; Directory of Sail Training Ships and Programs.&quot; This Directory gives a comprehensive listing of sail training opportunities available in the Western Hemisphere , with close-ups on many of the vessels. It also includes a broad overview of European &quot; Tall Ships &quot; and training programs . Edited by Ms. Nancy Richardson , the 1983 edition of this Directory is hot off the press and is available ata cost of$3 .00 plus 95C for postage. Write, including prepayment, to DIRECTORY c/o ASTA. SEA HISTORY, SPRING 1983