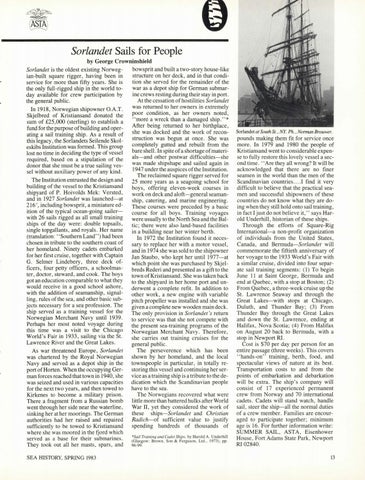 Sorlandet Sails for People by George Crowninshield bowsprit and built a two-story house-like Sorlandet is the oldest existing Norwegstructure on her deck, and in that condiian-built square rigger, having been in tion she served for the remainder of the service for more than fifty years. She is war as a depot ship for German submarthe only full-rigged ship in the world toine crews resting during their stay in port. day available for crew participation by At the cessation of hostilities Sorlandet the general public. was returned to her owners in extremely In 1918, Norwegian shipowner O.A .T . poor condition , as her owners noted , Skjelbred of Kristiansand donated the &quot; more a wreck than a damaged ship.&quot; * sum of ÂŁ25,000 (sterling) to establish a After being returned to her birthplace, fund for the purpose of building and opershe was docked and the work of reconating a sail training ship. As a result of struction was begun at once. She was this legacy , the Sorlandets Seilende Skolcompletely gutted and rebuilt from the eskibs Institution was formed . This group bare shell. In spite ofa shortage of materilost no time in deciding the type of vessel als-and other postwar difficulties-she required, based on a stipulation of the was made shipshape and sailed again in donor that she must be a true sailing ves1947 under the auspices of the Institution . sel without auxiliary power of any kind. The reclaimed square rigger served for The Institution entrusted the design and 25 more years as a seagoing school for building of the vessel to the Kristiansand boys, offering eleven-week courses in shipyard of P. Hoivolds Mek: Versted , work on deck and aloft-general seamanand in 1927 Sorlandet was launched-at ship , catering , and marine engineering. 216 &#39;, including bowsprit , a miniature edThese courses were preceded by a basic ition of the typical ocean-going sailercourse for all boys. Training voyages with 26 sails rigged as all small training were usually to the North Sea and the Balships of the day were: double topsails , tic ; there were also land-based facilities single topgallants, and royals . Her name in a building near her winter berth. (translation: &quot;Southern Land&quot;) had been In 1972 the Institution found it neceschosen in tribute to the southern coast of sary to replace her with a motor vessel , her homeland. Ninety cadets embarked and in 1974 she was sold to the shipowner for her first cruise, together with Captain Jan Staubo, who kept her until 1977-at G. Selmer Lindebery, three deck ofwhich point she was purchased by Skjelficers, four petty officers , a schoolmasbreds Rederi and presented as a gift to the ter, doctor, steward , and cook. The boys town ofKristiansand. She was taken back got an education comparable to what they to the shipyard in her home port and unwould receive in a good school ashore , derwent a complete refit. In addition to with the addition of seamanship , signalother work , a new engine with variable ling , rules of the sea, and other basic subpitch propeller was installed and she was jects necessary for a sea profession . The given a complete new wooden main deck. ship served as a training vessel for the The only provision in Sorlandet &#39;s return Norwegian Merchant Navy until 1939. to service was that she not compete with Perhaps her most noted voyage during the present sea-training programs of the this time was a visit to the Chicago Norwegian Merchant Navy. Therefore, World &#39; s Fair in 1933 , sailing via the St. she carries out training cruises for the Lawrence River and the Great Lakes. general public . The perseverence which has been As war threatened Europe , Sorlandet shown by her homeland , and the local was chartered by the Royal Norwegian townspeople in particular, in totally reNavy and served as a depot ship in the storing this vessel and continuing her serport of Horten. When the occupying German forces reached that town in 1940, she vice as a training ship is a tribute to the dewas seized and used in various capacities dication which the Scandinavian people have to the sea. for the next two years, and then towed to The Norwegians recovered what were Kirkenes to become a military prison. little more than battered hulks after World There a fragment from a Russian bomb War II, yet they considered the work of went through her side near the waterline , these ships-Sorlandet and Christian sinking her at her mooringsÂˇ. The German Radich-of sufficient value to justify authorities had her raised and repaired spending hundreds of thousands of sufficiently to be towed to Kristiansand where she was moored in the fjord which *Sail Training and Cadet Ships , by Harold A . Underhill served as a base for their submarines. (Glasgow : Brown, Son &amp; Ferguson, Ltd . , 1973) , pp . They took out all her masts , spars , and 96-99 . SEA HISlDRY, SPRING 1983

pounds making them fit for service once more . In 1979 and 1980 the people of Kristiansand went to considerable expense to fully restore this lovely vessel a second time . &quot; Are they all wrong? It will be acknowledged that there are no finer seamen in the world than the men of the Scandinavian countries .. . .I find it very difficult to believe that the practical seamen and successful shipowners of these countries do not know what they are doing when they still hold onto sail training, in fact I just do not believe it,&#39; &#39; says Harold Underhill , historian of these ships. Through the efforts of Square-Rig International-a non-profit organization of individuals from the United States , Canada , and Berrnuda-Sorlandet will commemorate the fiftieth anniversary of her voyage to the 1933 World &#39; s Fair with a similar cruise, divided into four separate sail training segments : (1) To begin June 11 at Saint George , Bermuda and end at Quebec , with a stop at Boston; (2) From Quebec, a three-week cruise up the St. Lawrence Seaway and through the Great Lakes-with stops at Chicago, Duluth , and Thunder Bay; (3) From Thunder Bay through the Great Lakes and down the St. Lawrence , ending at Halifax, Nova Scotia; (4) From Halifax on August 20 back to Bermuda, with a stop in Newport RI. Cost is $70 per day per person for an entire passage (three weeks) . This covers &quot; hands-on &quot; training, berth , food , and spectacular views of nature at its best. Transportation costs to and from the points of embarkation and debarkation will be extra. The ship&#39;s company will consist of 17 experienced permanent crew from Norway and 70 international cadets . Cadets will stand watch, handle sail , steer the ship-all the normal duties of a crew member. Families are encouraged to participate together; minimum age is 16. For further information write: SUMMER SAIL, AST A, Eisenhower House , Fort Adams State Park , Newport RI 02840. 13