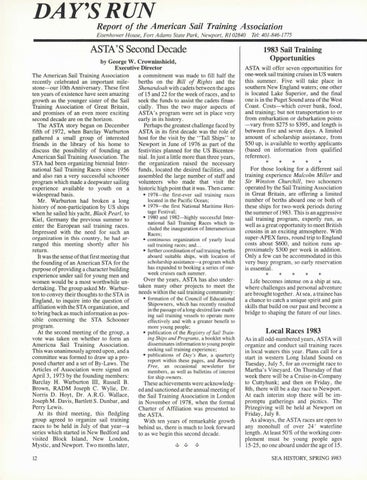 ASTA&#39; S Second Decade by George W. Crowninshield, Executive Director The American Sail Training Association a commitment was made to fill half the recently celebrated an important mileberths on the Bill of Rights and the stone-our 10th Anniversary. These first Shenandoah with cadets between the ages of 15 and 22 for the week of races, and to ten years of existence have seen amazing growth as the younger sister of the Sail seek the funds to assist the cadets financially. Thus the two major aspects of Training Association of Great Britain, ASTA &#39; s program were set in place very and promises of an even more exciting second decade are on the horizon . early in its history. The ASTA story began on December Perhaps the greatest challenge faced by fifth of 1972, when Barclay Warburton ASTA in its first decade was the role of host for the visit by the &quot;Tall Ships&quot; to gathered a small group of interested friends in the library of his home to Newport in June of 1976 as part of the festivities planned for the US Bicentendiscuss the possibility of founding an American Sail Training Association. The nial. In just a little more than three years, STA had been organizing biennial Interthe organization raised the necessary national Sail Training Races since 1956 funds, located the desired facilities, and and also ran a very successful schooner assembled the large number of staff and program which made a deepwater sailing volunteers who made that visit the experience available to youth on a historic high point that it was. Then came: • 1978- the first-ever sail training races widespread basis. Mr. Warburton had broken a long located in the Pacific Ocean; • 1979- the first National Maritime Herihistory of non-participation by US ships when he sailed his yacht, Black Pearl, to tage Festival; Kiel, Germany the previous summer to • 1980 and 1982-highly successful Interenter the European sail training races . national Sail Training Races which included the inauguration of Interamerican Impressed with the need for such an Races ; • continuous organization of yearly local organization in this country , he had arranged this meeting shortly after his sail training races; and ... return. • further coordination of sail training berths ltwasthesenseofthatfirstmeetingthat aboard suitable ships , with location of the founding of an American STA for the scholarship assistance-a program which purpose of providing a character building has expanded to booking a series of oneweek cruises each summer. experience under sail for young men and women would be a most worthwhile unOver the years, ASTA has also underdertaking. The group asked Mr. Warburtaken many other projects to meet the ton to convey their thoughts to the STA in needs within the sail training community : • formation of the Council of Educational England, to inquire into the question of affiliation with the STA organization, and Shipowners, which has recently resulted in the passage ofa long-desired law enablto bring back as much information as posing sail training vessels to operate more sible concerning the STA Schooner effectively and with a greater benefit to program . more young people; At the second meeting of the group , a • publication of the Registry of Sail Trainvote was taken on whether to form an ing Ships and Programs , a booklet which Americna Sail Training Association . disseminates information to young people This was unanimously agreed upon, and a seeking sail training experience; committee was formed to draw up a pro• publications of Day &#39;s Run , a quarterly posed charter and a set of By-Laws. The report within these pages , and Running Free, an occasional newsletter for Articles of Association were signed on members , as well as bulletins of interest April 3, 1973 by the founding members: for ship owners. Barclay H. Warburton III, Russell B. These achievements were acknowledgBrown, RADM Joseph C . Wylie, Dr. edandsanctionedattheannualmeetingof Norris D. Hoyt, Dr. A.R.G. Wallace, the Sail Training Association in London in November of 1978, when the formal Joseph M. Davis , Bartlett S. Dunbar, and Perry Lewis . Charter of Affiliation was presented to At its third meeting , this fledgling the ASTA . With ten years of remarkable growth group agreed to organize sail training behind us , there is much to look forward races to be held in July of that year-a to as we begin this second decade . series which started in New Bedford and visited Block Island, New London, w w w Mystic , and Newport. Two months later, 12

1983 Sail Training Opportunities ASTA will offer seven opportunities for one-week sail training cruises in US waters this summer. Five will take place in southern New England waters; one other is located Lake Superior, and the final one is in the Puget Sound area of the West Coast. Costs-which cover bunk, food , and training ; but not transportation to or from embarkation or debarkation points -vary from $275 to $395, and length is between five and seven days . A limited amount of scholarship assistance, from $50 up, is available to worthy applicants (based on information from qualified reference) .

For those looking for a different sail training experience Malcolm Miller and Sir Winston Churchill, two schooners operated by the Sail Training Association in Great Britain, are offering a limited number of berths aboard one or both of these ships for two-week periods during the summer of 1983. This is an aggressive sail training program, expertly run , as well as a great opportunity to meet British cousins in an exciting atmosphere . With super-APEX fares, round trip to England costs about $600, and tuition runs approximately $300 per week in addition . Only a few can be accommodated in this very busy program , so early reservation is essential. Life becomes intense on a ship at sea , where challenges and personal adventure are brought together. At sea , a trainee has a chance to catch a unique spirit and gain skills that build on our past and become a bridge to shaping the future of our lines .

Local Races 1983 As in all odd-numbered years , ASTA will organize and conduct sail training races in local waters this year . Plans call for a start in western Long Island Sound on Tuesday , July 5, for an overnight race to Martha&#39;s Vineyard. On Thursday of that week there will be a Cruise-in-Company to Cuttyhunk; and then on Friday, the 8th, there will be a day race to Newport. At each interim stop there will be impromptu gatherings and picnics. The Prizegiving will be held at Newport on Friday, July 8. As always , the ASTA races are open to any monohull of over 24&#39; waterline length. At least 50 % of the working complement must be young people ages 15-25, no one aboard under the age of 15 . SEA HISTORY, SPRING 1983