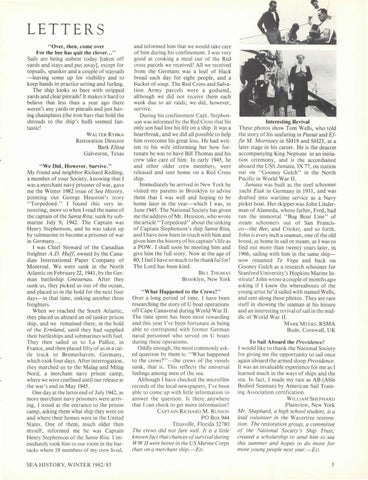 LETTERS "Over, then, come over For the bee has quit the clover ... " Sails are being unbent today [taken off yards and stays and put away), except for topsails, spanker and a couple of staysails - leaving some up for visibility and to keep hands in practice setting and furling. The ship looks so bare with stripped yards and clear pinrails! It makes it hard to believe that less than a year ago there weren't any yards or pinrails and just having chain plates (the iron bars that hold the shrouds to the ship's hull) seemed fantastic! WALTER RYBKA Restoration Director Bark Elissa Galveston, Texas "We Did, However, Survive." My friend and neighbor Richard Redling, a member of your Society, knowing that I was a merchant navy prisoner of war, gave me the Winter 1982 issue of Sea History, pointing out George Heuston's story "Torpedoed." I found this very interesting, more so when I read the name of the captain of the Sama Rita, sunk by submarine July 9, 1942. The Captain was Henry Stephenson, and he was taken up by submarine to become a prisoner of war in Germany .... I was Chief Steward of the Canadian freig hter A.D. Huff, owned by the Canadian International Paper Company of Montreal. We were sunk in the North Atlantic on February 22, 1941, by the German battleship Gneisenau. After they sunk us, they picked us out of the ocean, and placed us in the hold for the next four days-in that time, sinking another three freighters. When we reached the South Atlantic, they placed us aboard an oil tanker prison ship, and we remained there, in the hold of the Erm/and, until they had supplied their battleships and submarines with fuel. They then sailed us to La Pallice, in France, and then placed fifty of us in a cattle truck to Bremerhaven, Germany, which took four days. After interrogation, they marched us to the Malag and Milag Nord, a merchant navy prison camp, where we were confined until our release at the war's end in May 1945. One day at the latter end of Ju ly I 942, as more merchant navy prisoners were arriving, 1 stood at the entrance to the prison camp, ask ing them what ship they were on and where their homes were in the United States. One of them, much older then myself, informed me he was Captain Henry Stephenson of the Sama Rita. 1 immediately took him to our room in the barracks where 18 members of my crew lived, SEA HISTORY, WINTER 1982/ 83

and informed him that we would take care of him during his confinement. I was very good at cooking a meal out of the Red cross parcels we received! All we received from the Germans was a loaf of black bread each day for eight people, and a bucket of soup. The Red Cross and Salvation Army parcels were a godsend, although we did not receive them each week due to air raids; we did, however, survive. During his confinement Capt. Stephenson was informed by the Red Cross that his only son had lost his life on a ship. It was a heartbreak, and we did all possible to help him overcome his great loss. He had written to his wife informing her how fortunate he was to have Bill Thomas and his crew take care of him . In early 1945, he and other older crew members, were released and sent home on a Red Cross ship . Immediately he arrived in New York he visited my parents in Brooklyn to advise them that I was well and hoping to be home later in the year-which I was, in June 1945. The National Society has given me the address of Mr. Heuston, who wrote the article "Torpedoed" about the sinking of Captain Stephenson's ship Santa Rita, and I have now been in touch with him and given him the history of his captain's life as a POW. I shall soon be meeting him and give him the full story . Now at the age of 80, I feel I have so much to be thankful for! The Lord has been kind . BtLL THOMAS Brooklyn, New York

"What Happened to the Crews?" Over a long period of time, I have been researching the story of U boat operations off Cape Canaveral during World War II. The time spent has been most rewarding and this year I've been fortunate in being able to correspond with former German naval personnel who served on U boats during these operations. Oddly enough, the most commonly asked question by them is: "What happened to the crews?" -the crews of the vessels sunk, that is. This reflects the universal feelings among men of the sea. Although I have checked the microfilm records of the local newspapers, I've been able to come up with little information to answer the question. Is there anywhere that I can check to get more information? CAPTAIN RI CHARD M . RUSSON PO Box 944 Titusville, Florida 32780

The crews did not fare well. It is a little known fact that chances ofsurvival during WW II were belier in the US Marine Corps than on a mercham ship.-ED.

Interesting Revival These photos show Tom Wells, who told the story of his seafaring in Passat and Effie M. Morrissey in SHI9 and SH23, at a later stage in his career. He is the deacon accompanying King Neptune in an initiation ceremony, and is the accordianist aboard the USS Juniata, IX 77, on station out on "Gooney Gulch" in the North Pacific in World War II. Juniata was built as the steel schooner yacht Etak in Germany in 1931, and was drafted into wartime service as a Navy picket boat. Her sk ipper was John Linderman of Alameda, whose father, Fred, had run the immortal "Bug Boat Line" of steam schooners out of San Francisco-the Bee, and Cricket, and so forth. John is every inch a seaman, one of the old breed, al home in sail or steam, as I was to find out more than twenty years later, in 1966, sailing with him in the same shipnow renamed Te Vega and back on Gooney Gulch as a research schooner for Stanford University's Hopkins Marine Institute! John wrote a couple of months ago asking if I knew the whereabouts of the young artist he'd sailed with named Wells, and sent along these photos. They are rare stuff in showing the seaman at his leisure and an interesting revival of sail in the middle of World War II. MARK MYERS, RSMA Bude, Cornwall, UK To Sail Aboard the Providence! I would like to thank the National Society for giving me the opportunity to sail once again aboard the armed sloop Providence. It was an invaluable experience for me as I learned much in the ways of ships and the sea. In fact, I made my rate as AB (Able Bodied Seaman) by American Sail Training Association certification. WtLLIAM SHEPHARD Plainview, New York

Mr. Shephard, a high school student, is a lead volunteer in the Wavertree restoration. The restoration group, a commillee of the National Society's Ship Trust, created a scholarship to send him to sea this summer and hopes to do more for more young people next year. -ED. 3