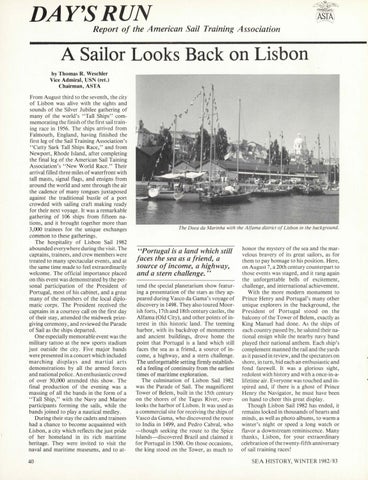 A Sailor Looks Back on Lisbon by Thomas R. Weschler Vice Admiral, USN (ret.) Chairman, ASTA From August third to the seventh, the city of Lisbon was alive with the sights and sounds of the Silver Jubilee gathering of many of the world&#39;s &quot;Tall Ships&quot; commemorating the finish of the first sail training race in 1956. The ships arrived from Falmouth, England, having finished the first leg of the Sail Training Association&#39;s &quot;Cutty Sark Tall Ships Race,&quot; and from Newport, Rhode Island, after completing the final leg of the American Sail Taining Association&#39;s &quot;New World Race.&quot; Their arrival filled three miles of waterfront with tall masts, signal flags, and ensigns from around the world and sent through the air the cadence of many tongues juxtaposed against the traditional bustle of a port crowded with sailing craft making ready for their next voyage. It was a remarkable gathering of 106 ships from fifteen nations, and it brought together more than 3,000 trainees for the unique exchanges common to these gatherings . The hospitality of Lisbon Sail 1982 abounded everywhere during the visit. The captains, trainees, and crew members were treated to many spectacular events, and at the same time made to feel extraordinarily welcome. The official importance placed on this event was demonstrated by the personal participation of the President of Portugal, most of his cabinet, and a great many of the members of the local diplomatic corps. The President received the captains in a courtesy call on the first day of their stay, attended the midweek prizegiving ceremony, and reviewed the Parade of Sail as the ships departed. One especially memorable event was the military tattoo at the new sports stadium just outside the city. Five major bands were presented in a concert which included Âˇ marching displays and martial arts demonstrations by all the armed forces and national police . An enthusiastic crowd of over 30,000 attended this show . The final production of the evening was a massing of all the bands in the form of a &quot;Tall Ship,&quot; with the Navy and Marine participants forming the sails, while the bands joined to play a nautical medley. During their stay the cadets and trainees had a chance to become acquainted with Lisbon, a city which reflects the just pride of her homeland in its rich maritime heritage. They were invited to visit the naval and maritime museums, and to at40

The Doca da Marinha with the A/Jama district of Lisbon in the background.

honor the mystery of the sea and the marvelous bravery of its great sailors, as for them to pay homage to his position . Here, on August 7, a 20th century counterpart to those events was staged, and it rang again the unforgettable bells of excitement, challenge, and international achievement. With the more modern monument to Prince Henry and Portugal&#39;s many other unique explorers in the background, the President of Portugal stood on the balcony of the Tower of Belem, exactly as King Manuel had done. As the ships of each country passed by, he saluted their national ensign while the nearby navy band played their national anthem. Each ship&#39;s complement manned the rail and the yards as it passed in review, and the spectators on shore, in turn, bid each an enthusiastic and fond farewell. It was a glorious sight, redolent with history and with a once-in-alifetime air. Everyone was touched and inspired and, if there is a ghost of Prince Henry the Navigator, he must have been on hand to cheer this great display. Though Lisbon Sail 1982 has ended, it remains locked in thousands of hearts and minds, as well as photo albums, to warm a winter&#39;s night or speed a long watch or flavor a downstream reminiscence. Many thanks, Lisbon, for your extraordinary celebration of the twenty-fifth anniversary of sail training races! SEA HISTORY, WINTER 1982/ 83