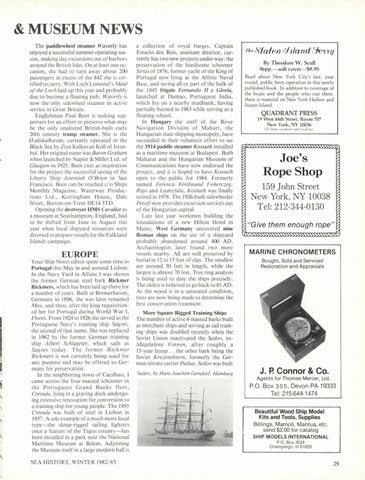 &amp; MUSEUM NEWS The paddlewheel steamer Waverly has enjoyed a successful summer operating seaso n, making day excursions out of harbors around the British Isles. On at least one occasion, she had to turn away about 200 passengers in excess of the 842 she is certified to carry. With Loch Lomond &#39;s Maid of the Loch laid up this year and probably due to become a floating pub, Waverly is now the only sidewheel steamer in active service in Great Britain . Englishman Paul Boot is seeking supporters for an effort to preserve what ma y be the only unaltered British-built early 20th century tramp steamer. She is the H aliskalkavan, currently operated in the Black Sea by Ziya Kalka van Koll of Istanbul. Her original name was Baron Graham when launched by Napier &amp; Miller Ltd . of Glasgow in 1925. Boot cites as inspiration for the project the successful saving of the Liberty Ship Jeremiah O &#39;Brien in San Francisco. Boot can be reached c/o Ships Monthly Magazine, Waterway Productions Ltd., Kottingham House, Dale Street, Burton-on-Trent DE14 3TD. Opening the destroyer HMS Cavalier as a museum at Southampton, England, had to be shifted from June to August this year when local shipyard resources were diverted to prepare vessels for the Falkland Islands campaign.

Your Ship Notes editor spent some time in Portugal this May in and around Lisbon. In the Navy Yard in AJfeite I was shown the former German steel bark Rickmer Rickmers, which has been laid up there for a number of years. Built at Bremerhaven, Germany in 1896, she was later renamed Max, and then, after the king requisitioned her for Portugal during World War I, Flores. From 1924 to 1926 she served as the Portuguese Navy&#39;s training ship Sagres, the second of that name. She was replaced in 1962 by the former German training ship Albert Schlageter, which sails as Sagres today. The former Rickmer Rickmers is not currently being used for any purpose and may be offered to Germany for prese rvation. In the neighboring town of Cacilhao, I came across the four-masted schooner in the Portuguese Grand Banks fleet, Creoula, lying in a graving dock undergoing extensive renovation for conversion to a training ship for young people. The 1895 Creoula was built of steel in Lisbon in 1937. A sole example of a much more local type-the sloop-rigged sailing lighters once a feature of the Tagus estuary-has been installed in a park near the National Maritime Museum at Belem. Adjoining the Museum itself in a large modern hall is SEA HISTORY, WINTER 1982/8 3

a collection of royal barges. Captai n Estacio dos Reis, assistant director, currently has two new projects under way: the preservation of the handsome sc hooner Sirius of I 876, former yacht of the King of Portugal now lying at the Alfeite Naval Base, and saving a ll or part of the hulk of the 1843 frigate Fernando II e Gloria, launched at Damao, Portuguese India, which lies on a nearby mudbank, having partially burned in 1963 while serving as a floating school. In Hungary the staff of the River Navigation Divi sion of Mahan, the Hungarian state shipping monopoly, have succeeded in their volunteer effort to see the 1914 paddle steamer Kossuth installed as a maritime museum at Budapest. Both Maharat and the Hungarian Musuem of Communications have now endorsed the project, and it is hoped to have Kossuth open to the public for 1984. Formerly named Ferenca Ferdinand Foherczeg, Rigo and Leanyfalu, Kossuth was finally retired in 1978. The 1926-built sidewheeler Perofi now provides excursion services out of the Hungarian capital. Late last year workmen building the foundations of a new Hilton Hotel in Mainz, West Germany uncovered nine Roman ships on the site of a shipyard probably abandoned around 400 AD. Archaeologists later found two more vessels nearby. All are well preserved by burial in 12 to 15 feet of clay. The smallest are around 30 feet in length, while the largest is almost 70 feet. Tree ring analysis is being used to date the ships precisely. The oldest is believed to go back to 81 AD. As the wood is in a sa turated condition, tests are now being made to determine the best conservation treatment.

the8falen ÂˇCf.fland 3-euy By Theodore W. Scull 96pp.-soft cover-$9.95 Read about New York Ci ty&#39;s last, year round, public ferry operation in this newly published book. In addition to coverage of the boats and the people who run them, there is material on New York Harbor and Staten Island.

More Square Rigged Training Ships The number of active 4-masted barks built as merchant ships and serving as sail training ships was doubled recently when the Soviet Union reactivated the Sedov, exMagdalene Vinnen, after roughly a 15-year layup ... the other bark being the Soviet Kruzenshtern, formerly the German nitrate carrier Padua. Sedov was built