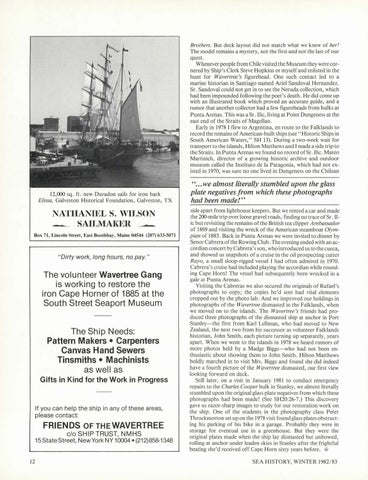 Brothers. But deck layout did not match what we knew of her! The model remains a mystery, not the first and not the last of our quest. Whenever people from Chile visited the Museum they were cornered by Ship&#39;s Clerk Steve Hopkins or myself and enlisted in the hunt for Wavertree&#39;s figurehead. One such contact led to a marine historian in Santiago named Ariel Sandoval Hernandez. Sr. Sandoval could not get in to see the Neruda collection, which had been impounded following the poet&#39;s death. He did come up with an illustrated book which proved an accurate guide, and a rumor that another collector had a few figureheads from hulks at Punta Arenas. This was a Sr. Ilic, living at Point Dungeness at the east end of the Straits of Magellan. Early in 1978 I flew to Argentina, en route to the Falklands to record the remains of American-built ships (see &quot;Historic Ships in South American Waters,&quot; SH 13). During a two-week wait for transport to the islands, Hilton Matthews and I made a side trip to the Straits. In Punta Arenas we found no record of Sr. Ilic. Mateo Martinich, director of a growing historic archive and outdoor museum called the lnstituto de la Patagonia, which had not existed in 1970, was sure no one lived in Dungeness on the Chilean

The volunteer Wavertree Gang is working to restore the iron Cape Horner of 1885 at the South Street Seaport Museum The Ship Needs: Pattern Makers • Carpenters Canvas Hand Sewers Tinsmiths • Machinists as well as Gifts in Kind for the Work in Progress

If you can help the ship in any of these areas, please contact:

&quot; ... we almost literally stumbled upon the glass plate negatives from which these photographs had been made!&quot; side apart from lighthouse keepers. But we rented a car and made the 200-mile trip over loose gravel roads, finding no trace of Sr. Ilic but revisiting the remains of the British tea clipper Ambassador of 1869 and visiting the wreck of the American steamboat Olympian of 1883. Back in Punta Arenas we were invited to dinner by Senor Cabrera of the Rowing Club. The evening ended with an accordian concert by Cabrera&#39;s son, who introduced us to the cueca, and showed us snapshots of a cruise in the oil prospecting cutter Rayo, a small sloop-rigged vessel I had often admired in 1970. Cabrera&#39;s cruise had included playing the accordian while rounding Cape Horn! The vessel had subsequently been wrecked in a gale at Punta Arenas. Visiting the Cabreras we also secured the originals of Rafael&#39;s photographs to copy; the copies he&#39;d sent had vital elements cropped out by the photo lab. And we improved our holdings in photographs of the Wavertree dismasted in the Falklands, when we moved on to the islands. The Wavertree&#39;s friends had produced three photographs of the dismasted ship at anchor in fort Stanley-the first from Karl Lellman, who had moved to New Zealand, the next two from his successor as volunteer Falklands historian, John Smith, each picture turning up separately, years apart. When we went to the islands in 1978 we heard rumors of more photos held by a Madge Biggs-who had not been enthusiastic about showing them to John Smith. Hilton Matthews boldly marched in to visit Mrs. Biggs and found she did indeed have a fourth picture of the Wavertree dismasted, our first view looking forward on deck. Still later, on a visit in January 1981 to conduct emergency repairs to the Charles Cooper hulk in Stanley, we almost literally stumbled upon the original glass plate negatives from which these photographs had been made! (See SH20:26-7.) This discovery gave us razor-sharp images to study for our restoration work on the ship. One of the students in the photography class Peter Throckmorton set up on the 1978 visit found glass plates obstructing his parking of his bike in a garage. Probably they were in storage for eventual use in a greenhouse. But they were the original plates made when the ship lay dismasted but unbowed, rolling at anchor under leaden skies in Stanley after the frightful beating she&#39;d received off Cape Horn sixty years before. &#39;1i SEA HISTORY, WINTER 1982/83