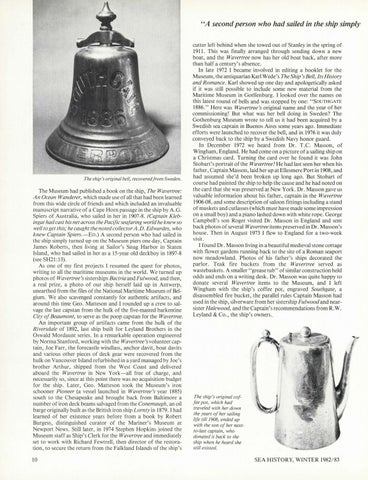 The Museum had published a book on the ship, The Wavertree: A n Ocean Wanderer, which made use of all that had been learned from this wide circle of friends and which included an invaluable manuscript narrative of a Cape Horn passage in the ship by A.G. Spiers of Australia, who sailed in her in 1907-8. (Captain Klebingat had cast his net across the Pacific seafaring world he knew so well to get this; he caught the noted collector A.D. Edwardes, who knew Captain Spiers.-Eo.) A second person who had sailed in the ship simply turned up on the Museum piers one day, Captain James Roberts, then living at Sailor&#39;s Snug Harbor in Staten Island, who had sailed in her as a 15-year old deckboy in 1897-8 (see SH21:13). As one of my first projects I resumed the quest for photos, writing to all the maritime museums in the world. We turned up photos of Wavertree&#39;s sisterships Bactria and Fulwood, and then, a real prize, a photo of our ship herself laid up in Antwerp, unearthed from the files of the National Maritime Museum of Belgium. We also scavenged constantly for authentic artifacts, and around this time Geo. Matteson and 1 rounded up a crew to salvage the last capstan from the hulk of the five-masted barkentine City of Beaumont, to serve as the poop capstan for the Wavertree. An important group of artifacts came from the hulk of the Riversdale of 1892, last ship built for Leyland Brothers in the Oswald Mordaunt series. In a remarkable operation engineered by Norma Stanford, working with the Wavertree&#39;s volunteer captain, Joe Farr, the forecastle windlass, anchor davit, boat davits and various other pieces of deck gear were recovered from the hulk on Vancouver Island refurbished in a yard managed by Joe&#39;s brother Arthur, shipped from the West Coast and delivered aboard the Wavertree in New York-all free of charge, and necessarily so, since at this point there was no acquisition budget for the ship . Later, Geo. Matteson took the Museum&#39;s iron schooner Pioneer (a vessel launched in Wavertree&#39;s year 1885) south to the Chesapeake and brought back from Baltimore a number of iron deck beams salvaged from the Conemaugh, an oil barge originally built as the British iron ship Lornty in 1879. I had learned of her existence years before from a book by Robert Burgess, distinguished curator of the Mariner&#39;s Museum at Newport News. Still later, in 1974 Stephen Hopkins joined the Museum staff as Ship&#39;s Clerk for the Wavertree and immediately set to work with Richard Fewtrell , then director of the restoration, to secure the return from the Falkland Islands of the ship &#39;s 10

cutter left behind when she towed out of Stanley in the spring of 1911. This was finally arranged through sending down a new boat, and the Wavertree now has her old boat back, after more than half a century&#39;s absence. In late 1972 I became involved in editing a booklet for the Museum, the antiquarian Karl Wede&#39;s The Ship&#39;s Bell, Its History and Romance. Karl showed up one day and apologetically asked if it was still possible to include some new material from the Maritime Museum in Gotlienburg. I looked over the names on this latest round of bells and was stopped by one: &quot;SOUTHGATE 1886.&quot; Here was Wavertree&#39;s original name and the year of her commissioning! But what was her bell doing in Sweden? The Gothenburg Museum wrote to tell us it had been acquired by a Swedish sea captain in Buenos Aires some years ago . Immediate efforts were launched to recover the bell, and in 1976 it was duly conveyed back to the ship by a Swedish Navy honor guard. In December 1972 we heard from Dr. T.C. Masson , of Wingham, England. He had come on a picture of a sailing ship on a Christmas card. Turning the card over he found it was John Stobart&#39;s portrait of the Wavertree! He had last seen her when his father, Captain Masson, laid her up at Ellesmere Port in 1908, and had assumed she&#39;d been broken up long ago. But Stobart of course had painted the ship to help the cause and he had noted on the card that she was preserved at New York . Dr. Masson gave us valuable information about his father, captain in the Wavertree 1906-08, and some description of saloon fittings including a stand of muskets and cutlasses (which must have made some impression on a small boy) and a piano lashed down with white rope . George Campbell&#39;s son Roger visited Dr. Masson in England and sent back photos of several Wavertree items preserved in Dr. Masso n&#39;s house . Then in August 1973 I flew to England for a two-week visit. I found Dr . Masson living in a beautiful medieval stone cottage with flower gardens running back to the site of a Roman seaport now meadowland. Photos of his father&#39; s ships decorated the parlor. Teak fire buckets from the Wavertree served as wastebaskets. A smaller &quot;grease tub&quot; of similar construction held odds and ends on a writing desk. Dr. Masson was quite happy to donate several Wavertree items to the Museum , and I left Wingham with the ship&#39;s coffee pot, engraved Southgate, a disassembled fire bucket, the parallel rules Captain Masson had used in the ship, silverware from her sistership Fulwood and nearsister Halewood, and the Captain&#39;s recommendations from R. W . Leyland &amp; Co., the ship&#39;s owners ..

The ship&#39;s original coffee pot, which had traveled with her down the years of her sailing life till 1908, ended up with the son of her nextto-last captain, who donated it back to the ship when he heard she still existed.